In many respects, Denmark is a trailblazer of the energy transition, including the use of thermal energy storage systems. Pit stores, for one, are already fairly widespread in the Scandinavian country. During the summer, water heats up in them so it can be used in the winter, for instance to heat buildings. Now, Denmark-based Andel and Stiesdal aim to connect a thermal storage system to the grid in a project named GridScale.

The concept of storing electricity as thermal energy in order to use it to produce power on demand isn’t novel as such. In Germany, various projects are underway, involving heating volcanic rock using excess electricity generated from renewables. Recovery is performed with thermal energy used to evaporate water, which generates electricity via a conventional steam turbine-and-generator combination.

Conversely, GridScale splits thermal energy into heat and cold, each of which is stored in a tank full of basalt granules. To charge the system, the electricity powers a cycle in which a heat pump heats air, which heats up a heat tank. On the flip side, a chilling unit fills the second basalt tank with cold air.

Mechanism of the GridScale cycle

The detailed inner workings of the GridScale cycle

When the GridScale system is charged, it runs on surplus electricity from the grid. A compressor compacts preheated air and channels it to the heat tank. This compression heats the air to a temperature of 600 degrees Celsius. Anyone who has pumped up a bicycle tire or a ball is familiar with the law of physics in play: the pump and valve can get really hot.

The hot air flows through the heat tank and transfers its thermal energy to the basalt granules in the tank. At the other end, the air, which has cooled down substantially, exits the heat tank and flows through a heat exchanger at about 75 degrees, discharging further heat. This heat can be fed into a district heat network or used as process heat in an industrial plant.

Then, at ambient temperature, the air flows into a turbine that drives the electric motor via the same shaft as the compressor. This makes use of the same law of physics, albeit in reverse: the turbine expands the air, which causes its temperature to drop in a closed system. In the cold tank, the 30 degree air extracts thermal energy from the rock and cools it down. At the other (hot) end of the cold tank it flows out at about 385 degrees, back towards the compressor. And the cycle starts over.

During discharge, the cycle repeats in reverse order. The hot air from the heat tank drives a turbine as it expands when it cools. The cold air from the cold tank is pre-compressed by the compressor in order to produce more power later on. Once again, the compressor and turbine share the shaft that drives the generator that produces electricity. The difference between the output of the turbine and compressor flows into the grid as electrical energy.

Both of the basalt granule tanks have a hot and cold end. A thermocline runs somewhere between these two ends. It is a narrow transitional zone between different temperature areas. Anyone who has swum in the sea is familiar with the phenomenon of water suddenly becoming much colder.

The position of the thermocline in the tanks corresponds to the fill level of the energy storage: the closer it is to the hot end in the cold tank and the cold end in the heat tank, the fuller the storage – and vice-versa. The two thermoclines move in sync.

To generate electricity, the cycle is reversed and produces electricity via the electric motor, which acts as a generator. This brings the temperatures in the two tanks back closer to each other.

“Storing heat and cold increases round trip efficiency from about 40 percent to some 60 percent,” inventor and company founder Henrik Stiesdal tells en:former. This means that up to 60 percent of the energy used as electricity to charge the system can be fed back into the grid as electricity.

GridScale is one of the projects in which engineers have come up with an intelligent combination of tried-and-tested technologies in order to create something new. An electric motor works together with a heat pump and a compressor sandwiching two rock granule containers.

Such a system is capable of feeding two megawatts into the grid. Each pair of tanks stores the energy needed to supply this power for five hours. This means that four tanks operating at capacity can cover the night shift of a solar farm.

The developers claim that basalt maintains the temperature long enough to bridge several days of lulls during which wind turbines stand still. To increase storage capacity, a GridScale pumped storage power plant can simply be fitted with multiple pairs of tanks. “The modular design contributes to the cost reduction we can achieve through mass production,” explains Stiesdal.

Visualization of the GridScale storage system. With the modular system, the number of tanks can be varied. 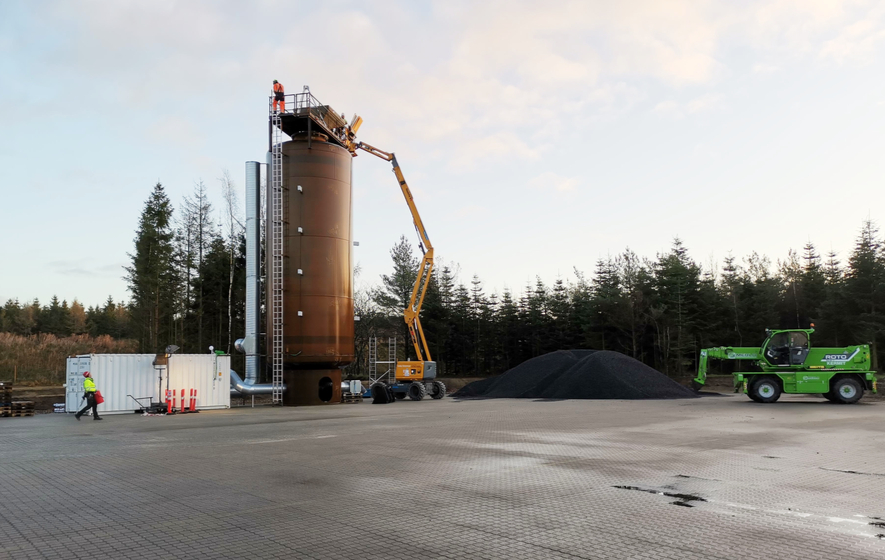 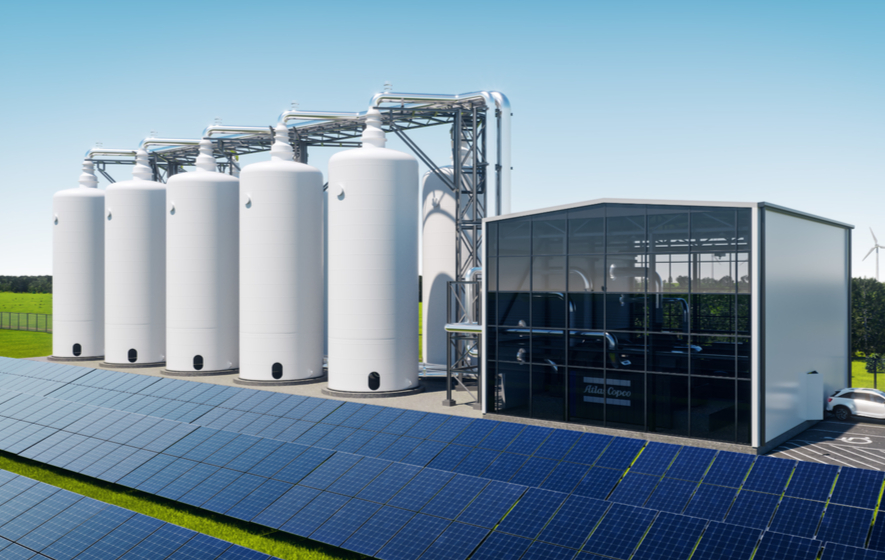 Visualization of the GridScale storage system. With the modular system, the number of tanks can be varied.

Unlike refrigerators and air conditioning systems, GridScale uses air instead of refrigerants that are harmful to the environment. Its engineers add that no rare natural resources are used and that there is no danger of explosion.

These factors will enable the technology to be operated at low cost. Its efficiency of 55 to 60 percent is far below that of redox flow storage (75 to 80 percent) and lithium-ion batteries (over 95 percent).

But manufacturers are convinced that this product will be profitable because they believe that the low construction, material and maintenance costs, the modular design and the stable storage capacity over several years will provide for an extremely favourable cost profile.

Based on company estimates, serial production would put the cost of one kilowatt hour of recovered electricity at approximately ten euros. According to GridScale, the costs of large battery storage systems are 20 times higher.

Danish government on board

The innovative project is scheduled for an initial three years and has a budget of 35 million Danish crowns, equivalent to approximately 4.7 million euros. Just over half of it is a subsidy from the Danish government.

Stiesdal claims that the planned demonstration plant will have an electric generation capacity of two megawatts (MW) and an output of 20 megawatt hours. It is slated to be connected to the grid next year and go into normal operation. The waste heat it produces will be fed into the local district heating network.