Europe’s largest forest area, large dammed lakes in the north, and plenty of wind and space – Sweden has excellent conditions for renewable energy, which the country is already extremely successful in leveraging. The Scandinavian nation meets far more than half of its energy needs (60 percent in 2020) with hydropower, biomass and wind. Sweden is thus the clear leader within the European Union. As regards the energy transition, the country is several steps ahead of most of EU member states.

Even more renewable energy needed in the future

This also holds true for the electricity sector. Sweden has a tradition of generating huge amounts of electricity using hydro and nuclear energy, which makes greenhouse gas emissions from its energy industry very low on an international scale. However, as hydropower has little potential for expansion, the Scandinavian country has stepped up the use of other renewable energy sources for several years now. Onshore wind is being expanded considerably, and several offshore wind farms are in the planning phase. In addition, a rising number of Swedes is installing roof-mounted PV systems. It is above all the solar boom that is surprising at first glance, given the notoriously long and dark winters prevalent in the Nordic nation.

The reason for the intensified expansion of renewable energy is Sweden’s much greater demand for green electricity going forward. By 2045, the Scandinavian nation wants to be net zero and decarbonise sectors such as industry and transport with regenerative power. For instance, the country’s steel industry is set to employ new methods to replace coking coal with hydrogen, and construction of large-scale electrolysers is planned to ensure production of green hydrogen. What’s more, electricity is planned to be generated solely from renewable energy sources five years sooner, starting in 2040.

In days past, energy issues related to Sweden almost always centred on hydroelectric power and nuclear energy. No wonder, given that the country with a population of 10 million and Norway have the largest number of dammed lakes in Europe along with several nuclear reactors. Twenty years ago, these two sources of energy combined for over 90 percent of electricity generation. And although they have since lost some of their significance, they still top the power rankings by a wide margin.

in per cent, source: Our world in data

According to the Our World in Data online platform, hydropower accounted for 43 percent of electricity production in 2021, with nuclear energy taking a share of 31 percent. Whereas capacity installed at run-of-river power stations has been unchanged for years according to the Swedish Energy Agency, nuclear energy has lost ground in the last few years, with two of eight reactor units shutting down in 2019 and 2020.

Third spot is occupied by wind energy, accounting for some 16 percent in 2021. Wind is by far the fastest growing regenerative energy source in Sweden. In the past ten years, the country has doubled the number of its onshore wind turbines and more than tripled both installed capacity and power production. According to figures published by the Swedish Wind Energy Association and the Our World In Data platform, in 2021 about 4,800 wind turbines with a total capacity of 12.2 gigawatts (GW) generated approximately 27.3 terawatt hours of electricity.

Build-out of onshore wind energy has gained momentum especially in recent years, amounting to 2 GW per annum between 2019 and 2021. This puts Sweden in the lead pack in Europe.

The country draws on favourable wind conditions, copious space and low population density. Many of the new wind farms are being built in sparsely populated central and northern Sweden and are much bigger than those in other parts of Europe. The Swedish farms often have several hundred megawatts of installed capacity.

Northern Sweden will be home to Markbygden, one of the world’s most powerful onshore wind farms. According to project developer Svevind, plans envisage construction of more than a thousand wind turbines in several stages, which will combine for an installed capacity of about 4 GW.

RWE is among the players on this attractive market. The company recently commissioned one of Europe’s largest wind farms, Nysäter, some 400 kilometres north of Stockholm. It boasts 114 turbines and a capacity of 475 megawatts (MW). The farm produces enough green electricity to cover the annual needs of over 300,000 Swedish homes and support the green industrial revolution in Sweden. 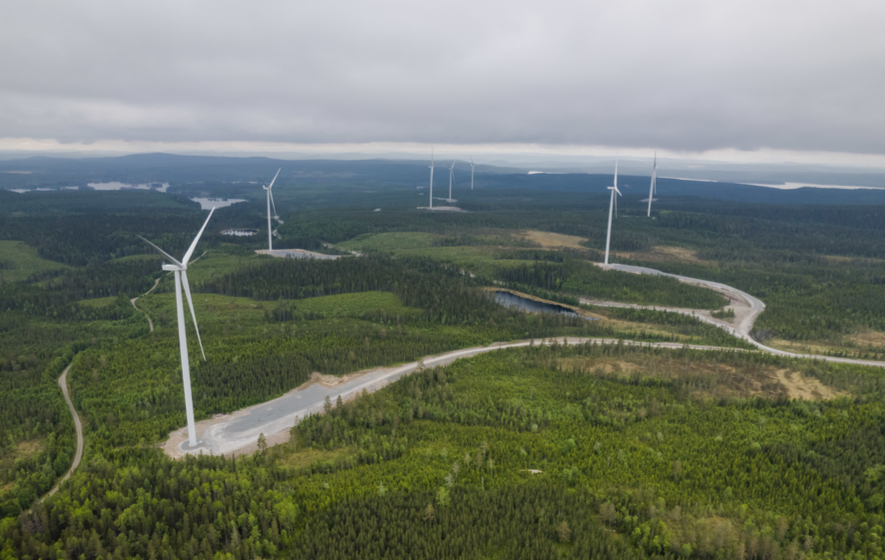 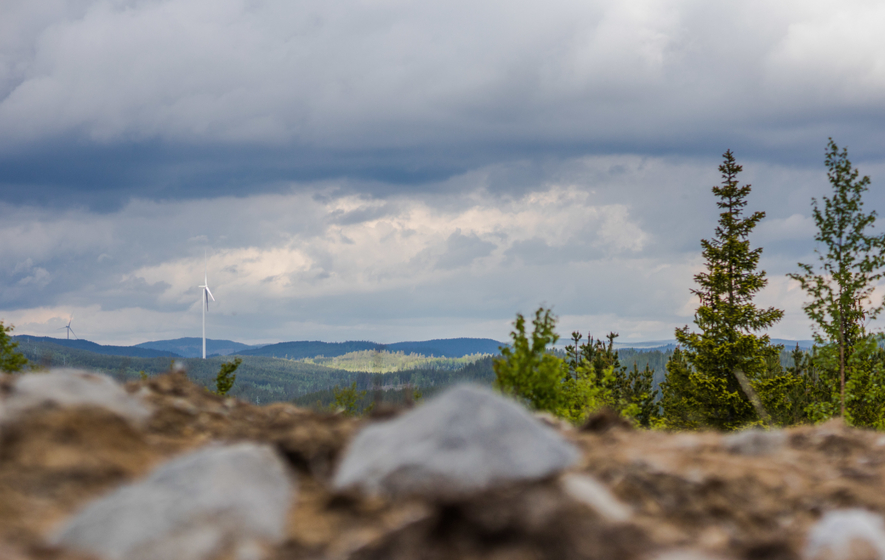 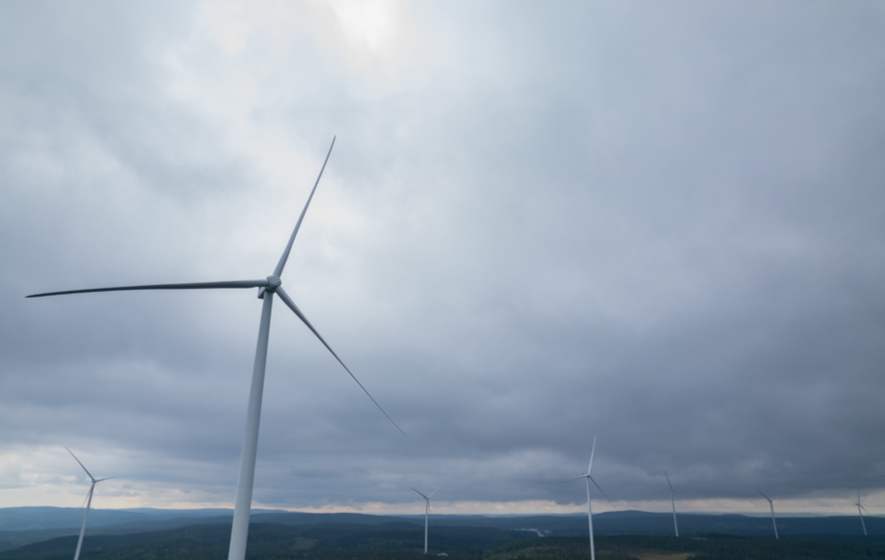 When compared to onshore wind energy, offshore wind has yet to make a notable contribution to the country’s electricity supply. So far, only a few wind farms are being operated off the Swedish coast. Some of them are very old, they all have small turbines, and they have a combined capacity of merely 200 MW. This is because the Swedish wind energy remuneration system did not distinguish between onshore and offshore wind. For a long time, investment in offshore wind was not very attractive due to the technology’s higher cost.

But this is a phenomenon of the past, as multiple projects are being planned and Sweden intends to expand its offshore sector substantially. The government has designated the North Sea, the Baltic Sea and the Gulf of Bothnia as development areas. These waters are to accommodate wind farms generating some 20 to 30 terawatt hours (TWh) of electricity every year, roughly equalling current output from the Nordic country’s onshore wind farms. Moreover, the Swedish Energy Agency has been commissioned to identify areas suitable for another 90 TWh of offshore capacity.

This is a major step for Sweden en route to driving climate protection and creating green jobs for the future. Today’s industry calls for offshore wind energy. We’re accelerating the development of offshore wind energy by earmarking a series of suitable areas far off the cost. Annika Strandhäll, Swedens Minister for Climate and the Environment

Similar to offshore wind, Sweden’s solar power is still in its nascent stages. According to Our World in Data, this energy source accounted for less than one percent of total electricity generation. However, the sun is becoming an increasingly important source of energy in the high north. Installed capacity grew from 230 megawatts in 2017 to just under 1.6 gigawatts in 2021, nearly quintupling over the space of five years. Annual capacity additions rose at increasing rates during this period.

Development of Swedish solar capacity from 2016 to 2021

At the end of last year, more than 92,000 solar systems were connected to the grid. This growth is primarily driven by individuals and businesses mounting PV modules in the roofs of their homes or warehouses. In the past year, 50 percent of the build-out consisted of systems with a size of under 20 kilowatts (kW), with 42 percent coming from systems with a capacity of between 20 kW and 1 MW. Expansion of larger solar systems such as ground mounted farms paled by comparison.

The Swedish Energy Agency cites two reasons for the solar boom, one being people’s desire to contribute to combatting climate change, and the other being the recent substantial rise in electricity prices. This makes solar systems an attractive proposition for generating electricity for internal consumption.

The developments in onshore and offshore wind as well as solar power demonstrate that Sweden’s energy supply is becoming even greener. On the strength of its ambitious climate goals and plentiful resources, the country can continue leading by example in the energy transition.