Australia’s wind and solar resources are vast. The country has the highest average solar radiation per square metre of any continent in the world and abundant wind on its coasts, particularly between latitudes 40° and 50°, owing to strong westerly winds known as the ‘roaring forties’.

However, integrating these huge, but variable resources into the electricity grid requires flexible assets such as energy storage, and, while battery technology may be coming on in leaps and bounds, pumped hydro power remains one of the best ways of providing this on a large scale.

Australia’s opportunities for hydro power are limited and have largely been put to use already. The main centres are the Snowy Mountains in southeast Australia and Tasmania, an island lying 240 kilometres south of the mainland. As a result, developers elsewhere in the country are having to think outside the box.

They are being helped by the Australian Renewable Energy Agency (ARENA), which has announced funding for an innovative project to use hydropower, in the form of pumped hydro, and solar power to provide large-scale electricity storage for the state of Queensland.

If built, the Kidston Stage 1 Pumped Hydro Energy Storage project would be the first pumped storage facility constructed in the country since 1984 and the first to be used purely for energy storage as oppose to energy storage and water management.

The project will rehabilitate an abandoned gold mine. Project developer Genex Power has already turned part of the former Kidston Gold Mine’s tailings facility into a 50 MW solar farm, taking advantage of an existing 132kV transmission line and substation.

The pumped hydro project will be based around the mine’s two main pits, the lower 54 hectare Eldridge pit and the higher 52 hectare Wises pit, which have filled with water and can be used as reservoirs.

A concrete lined pressure tunnel will connect the upper reservoir to the underground generation powerhouse, which in turn will be connected to the lower reservoir by a concrete lined tailrace tunnel. Using the existing pits will mean major construction and installation savings.

When electricity demand is low, water will be pumped up to the higher reservoir using electricity from the National Electricity Market (NEM). It would then be released at times of peak demand, flowing back down to the lower reservoir via two 125 MW reversible turbines with a start-up time of less than 30 seconds.

The facility will work as a closed loop system to minimise any environmental impacts during operation.

The mine is also connected to a dam on the Copperfield river 18 km away by a gravity-fed pipeline. Genex owns the pipeline and has rights to draw 4,650 million litres of water a year, which would support water supply in the event of a period of extreme drought.

A pumped storage power plant is to be built on the site of a former gold mine in Queensland. When water is released from the upper reservoir into the lower one, it drives turbines and generates electricity. 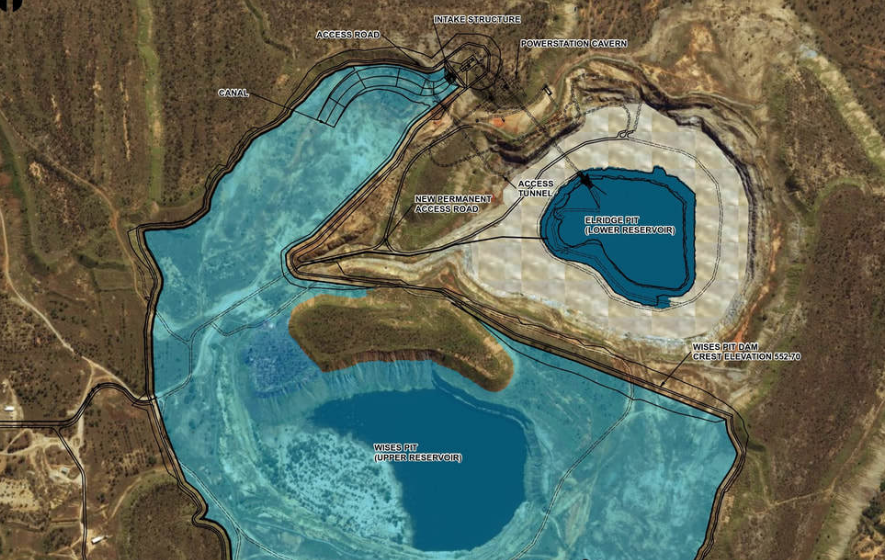 A pumped storage power plant is to be built on the site of a former gold mine in Queensland. When water is released from the upper reservoir into the lower one, it drives turbines and generates electricity.

The pumped storage project will be a key component of the Kidston clean energy hub, which includes the existing 50 MW solar farm and plans for an additional 270 MW of solar power. Genex Power is also looking at a possible 150 MW of wind power at the site.

The pumped hydro element will have 250 MW/2,000 MWh capacity, equal to eight hours of energy storage. The project will feature a 187 km, 275 kV transmission line to connect with the NEM. Together, the pumped hydro facility and new transmission infrastructure will facilitate the connection of additional renewable energy projects in the region.

A connection and access agreement was reached in March for the transmission line and Powerlink, the company contracted to build it, has received permission to proceed with the project.

ARENA has announced conditional approval for A$47 million (€30 million) in funding for the project, which has a total cost of A$777 million (€495 million), including the transmission line and substations. A large part of the remainder is likely to be provided as concessional debt financing by the Northern Australia Infrastructure Facility.

If all goes well, the Kidston clean energy hub should be up and running by 2024, providing large-scale flexibility for the growth of variable wind and solar power in northern Queensland.