Archaea have been converting hydrogen and carbon dioxide from organic material to methane for millions of years. This is how these bacteria-like single-cell organisms created the Earth’s natural gas reserves. “Very simply put, they tear the CO2 apart and put it back together with the H2 in a different way. This reconfiguration results in H2O, i.e. water, and CH4, i.e. methane,” explains Daniel Sidler from Swiss project partner Energie360°.

Methanogenic archaea can still be found in the depleted natural gas storage facilities in Pilsbach, which is situated between Salzburg and Linz. For several years, the ability of these microorganisms to produce methane has been researched in the Underground Sun Conversion (USC) pilot project and used to produce carbon-neutral methane. “If we feed the archaea with hydrogen produced by sustainable means and with captured carbon dioxide, the methane obtained as a result can also be considered climate-neutral,” says Stephan Bauer, project lead at  RAG Austria, the country’s largest gas storage company.

Bauer says that the first project phase, which has already been completed, has demonstrated that the microorganisms actually do perform methanation. Successor projects will be designed to build on the findings in order to set up a marketable service.

RAG Austria aims to use USC to provide carbon-neutral, seasonal energy storage systems. This is also the goal pursued by the company with the Underground Sun Storage 2030 (USS 2030) project in Gampern, some ten kilometres from Pilsbach, where green hydrogen is to be stored – also in a depleted natural gas storage facility.

Seasonal energy storage systems are necessary to bridge the gaps between electricity generation and demand mainly resulting from the naturally smaller supply of usable solar power and the increased need for heating in the winter. Therefore, the objective is to use excess electricity to produce green hydrogen in the summer, which provides energy in the winter.

With this worldwide unique and innovative method, the natural formation process of natural gas is reproduced. On the one hand, in the natural formation process, organic matter must first be built up (in principle, solar energy must also be stored). These organic substances die, are decomposed and converted into (methane) natural gas. This process is shortened in Underground Sun Conversion technology by going directly into the process with the feedstock of the last conversion step. 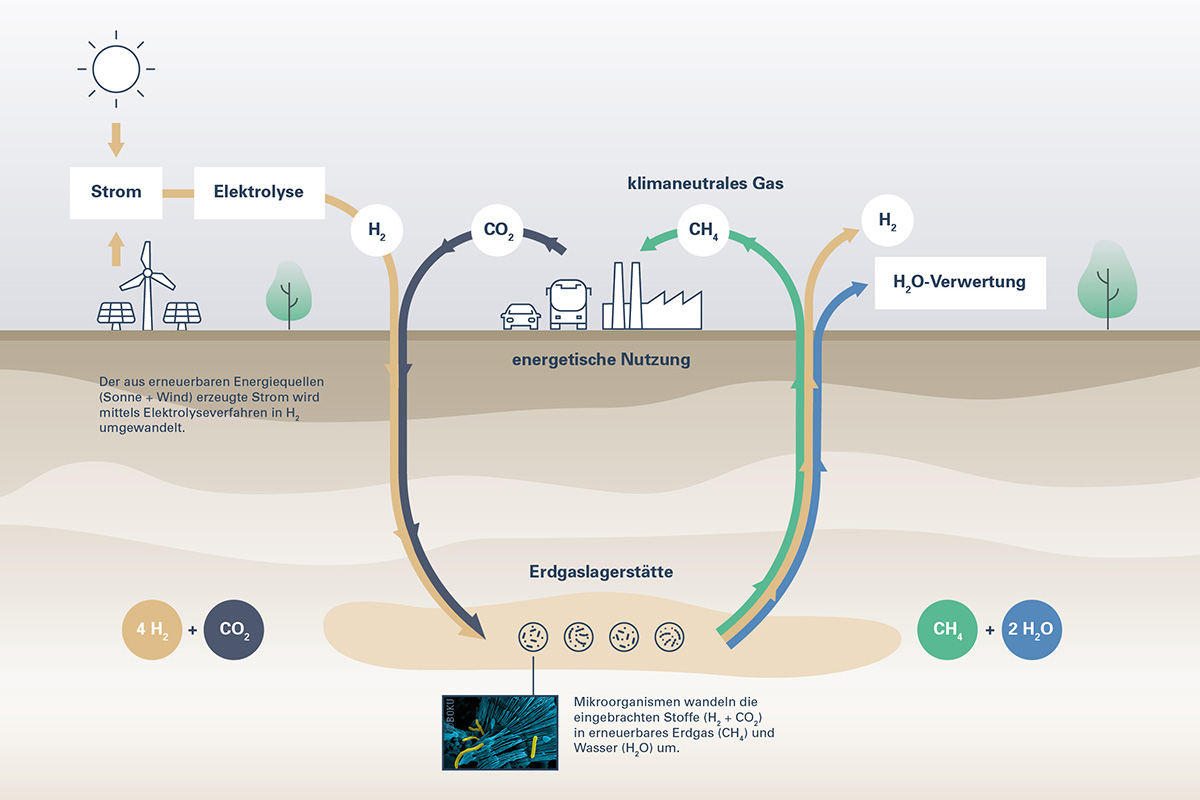 With this worldwide unique and innovative method, the natural formation process of natural gas is reproduced. On the one hand, in the natural formation process, organic matter must first be built up (in principle, solar energy must also be stored). These organic substances die, are decomposed and converted into (methane) natural gas. This process is shortened in Underground Sun Conversion technology by going directly into the process with the feedstock of the last conversion step.

USC seeks to further process the hydrogen to methane. As a storage medium, this gas has the advantage of being easier to get from A to B than hydrogen. It is thus better suited to be used as a fuel in the transportation sector. The disadvantage compared to direct H2 usage is that methanation requires an additional conversion step, which increases its energy-intensity.

However, this added energy requirement will probably hardly factor into the USC equation, as explained by Daniel Sidler of Energie360°: “The pressure prevalent and ambient temperature at a depth of 1,000 metres and the gases’ long dwell time eliminate the need to provide more energy for methanation. We need additional energy above all to pump the gases, but this requirement will probably be much lower than for other methods.”

Next goal: a marketable service

This means that, given the right conditions, the microorganisms work entirely independently. “However,” says Stephan Bauer of RAG Austria, “they can only work alone if we provide them with the right ratio of hydrogen to carbon dioxide. Therefore, we must keep the microbiological balance as constant as possible to ensure that the methanogenic archaea remain as active as possible.

A challenge en route to accomplishing this is the cycle of the times of year: In the future, green hydrogen production is likely to take place primarily in the summer. By contrast, carbon dioxide is produced mostly in the winter when conventional power stations jump in to bridge the supply shortages caused by renewables. “Therefore, the task at hand now is to develop a cost-effective management model,” Stephan Bauer declares, “After all, in the end, we want the energy cycle we offer to not only be carbon-neutral, but financially attractive as well.

The future cycle in Upper Austria could thus feature green methane from the store in Pilsbach being fired in gas power plants and the resulting carbon dioxide being captured and transported back to Pilsbach for the next methanation process. The addition of hydrogen from the Gampen storage facility would cause it to react back to methane. If such a cycle works without fossil fuel, it will be emission-neutral.

This would definitely bring Austria a step closer to achieving its climate goals. Above and beyond this, Swiss project partner Energie360° wants to find out whether the process is suitable for use in other parts of the world as well. With this in mind, the company is already looking for potential storage sites in Switzerland for implementing the method as well as for other purposes. “The primary objective is to define replicable geological factors that enable us to set up storage facilities irrespective of political boundaries,” declares project manager Sidler. However, he cannot predict how widespread potential reservoirs are. Nevertheless, he feels “cautious optimism” is in order.