Decarbonisation across all sectors is pivotal to the success of the energy transition, with transportation playing a key role in particular. Automobiles, lorries and buses currently account for some 20 percent of total emissions in the European Union. Experts believe electric vehicles can be part of the solution. However, EVs also feature various technologies and drive systems, which can be broken down into two major camps: battery-electric vehicles (BEVs) and fuel cell-electric vehicles (FCEVs).

Business consultancy McKinsey conducted a study to explore how these two techniques will evolve and team up to drive the energy transition in the transportation sector. The authors concluded that they can both play a part and that no technology should be left out of the mix. They developed a scenario which focuses on the continued development of both BEVs and FCEVs.

The study was commissioned by the Clean Hydrogen Partnership, a public-private partnership forged by the European Commission, the fuel cell and hydrogen sectors (represented by Hydrogen Europe) and research community Hydrogen Europe Research. The common goal is to support research and development projects relating to hydrogen technology with a view to making a contribution to the EU’s hydrogen strategy.

Combined infrastructure is the perfect solution

With this study, the experts have underscored how important a role diversity plays when transitioning from internal combustion engines to sustainable technologies in the transportation sector. They thus believe that the joint expansion of necessary infrastructure is the most sensible option, as this would promote both BEV and FCEV technology while putting them on the road. An added advantage, according to the study, is that this would reduce dependency on a single technology.

The knock-on effect of developing multiple technologies is that this may reduce the risk of exhausting required resources. In addition, launching both BEVs and FCEVs on the market would accelerate the introduction of electric vehicles even further as this would give consumers the possibility to choose between two drive variants, enabling them to make decisions based on their specific needs.

Based on the authors’ estimates, this combined approach is less expensive than it would be to focus on BEV infrastructure alone.

Projections have electric vehicles ­ mostly BEVs ­ accounting for about 25 percent of all vehicles registered by 2030, with this share set to increase to as much as 93 percent by 2050. Such a rapid rise in new BEV and FCEV registrations will make associated infrastructure expansion indispensable. Moreover, the experts find that buildout will have to be speedy. The concurrent expansion of BEV and FCEV infrastructure proposed by the study will require approximately 52 million charging points and roughly 5,000 hydrogen filling stations to be set up in the EU by 2030. By comparison, the EU has some 270,000 charging points and 200 hydrogen stations today. 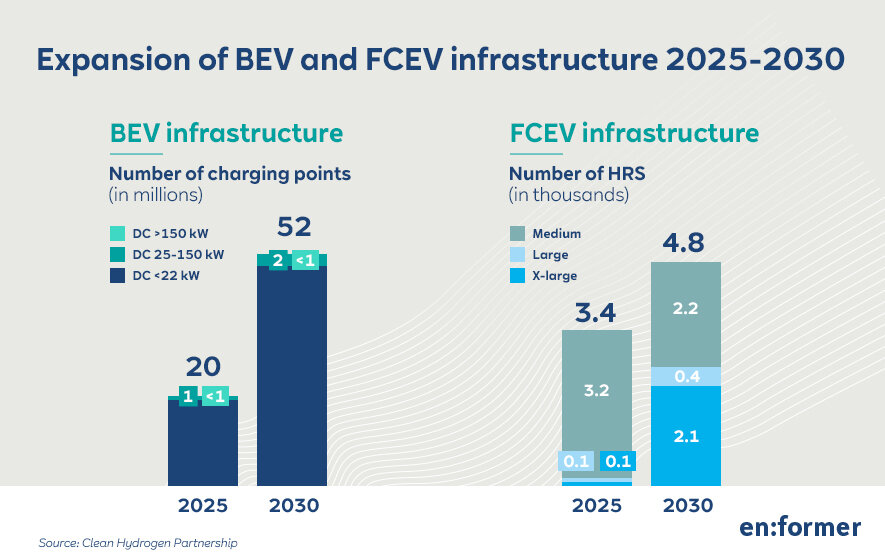 According to the authors’ estimates, this immense expansion will draw a total investment of about 200 billion euros, with roughly 30 billion euros in annual spending being required between 2026 and 2030. The lion’s share of some 95 percent would have to be dedicated to BEV charging infrastructure. Approximately ten billion euros would be earmarked for the construction of hydrogen filling stations, contributing to the continued expansion of fuel cell technology within the EU.

The study contains further estimates and forecasts regarding various drive variants and associated applications. Read more
What will we fill up our cars with? Read more
European power demand to rise by 25-50% by 2035 Read more