A study by Frontier Economics reaches the conclusion that a politically accelerated phase-out of coal by 2030 would result in additional costs of up to 4 billion euros per year. It would also do little to benefit the climate, as carbon dioxide emissions would merely be shifted abroad.

Homework is usually given to deepen the understanding of lessons that have already been learned and is supposed to done. With regard to the climate protection goals, the energy sector has already done its homework, reducing its emissions by around 40 percent by 2020. And emissions will continue to fall. By contrast, other sectors such as households, transport and agriculture have not come so far and could do more. Despite this, the German government has set the goal of phasing out the use of coal for electricity generation.

Almost half of Germany’s electricity is still generated using coal. As a result, coal is a major factor behind security of supply and stable electricity prices. But this will change. Because a politically mandated phase-out of coal will be expensive. This is the conclusion reached by a study by the consultancy Frontier Economics, which was commissioned by RWE. Private customers and energy-intensive industries will bear the brunt of this. In many cases, the development of electricity prices is a key factor which determines whether a company can remain competitive at the international level. 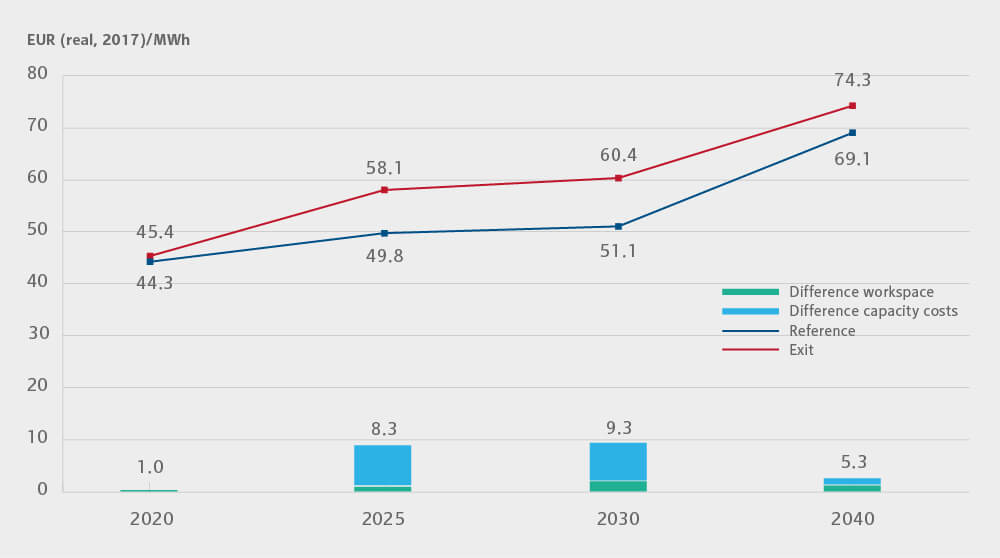 According to the study, electricity prices would increase to around 25 euros per megawatt hour (MW) by 2040. That would be nine euros more per MW than in a reference scenario without a politically dictated phase-out. Consequently, the experts’ analysis indicates that the price of electricity would increase by more than one third compared to current prices. This would place an additional burden on consumers of up to four billion euros per year by 2030, compared to the reference case. Between 2020 and 2040, the additional costs amount to around 29 billion euros. The study prepared by Frontier Economics is based on the exit scenario ‘Eleven Principles for a Consensus on Coal’ by the think tank Agora Energiewende from 2016. Frontier Economics analysed the impact on the electricity price stemming from a reduction of coal-fired capacity from the current level of around 43 gigawatts (GW) to around 21 GW in 2030.

Will this at least have a positive impact on the climate? It’s highly questionable. After a phase-out, a large part of the coal-generated electricity would be produced by foreign power plants or domestic power stations with higher variable costs. While this would lead to lower carbon emissions in Germany, the reduction would mostly be offset by an increase in emissions abroad. According to the authors of the study, “A mandated, national phase-out of coal has almost no impact on CO2 emissions in Europe, as the emission allowances freed up at the German power plants would be used in other countries or sectors.”

However, the carbon dioxide emissions would only be shifted abroad if Germany’s European neighbours continued to supply Germany with electricity. Right now, other countries help when generation capacities become tight in Germany. But according to a report by Handelsblatt (german only), this European solidarity may become fragile in the near future. This business periodical cites an analysis by the German Association of Energy and Water Industries (BDEW), which states that the presently available surplus of secured generation capacity may decline throughout Europe over the medium to long term.

As BDEW Chairman Stefan Kapferer told Handelsblatt, “All EU member states are working to expand renewables. As a result, Germany’s European neighbours are also reducing their conventional, secure capacities.” According to the article, it is rather unlikely that a shortfall in Germany would be accompanied by a surplus of generation capacities in the neighbouring countries. As Kapferer noted, Germany should not rely on electricity imports from abroad in cases when wind and solar production is insufficient, and new gas-fired generation capacities would be needed to address such a situation.

The analysis of Frontier Economics on the costs and climate effects can be found here.

The article in Handelsblatt is available here (german only).

To the analysis by Frontier Economics Read more

Hybrid power plants: two is better than one

Thanks to detailed pandemic plans, the energy industry is well prepared for the corona crisis
Read more
2020-01-02

Due to earthquake warnings, the Dutch government is planning on ending extraction in Groningen in 2022
Read more
More about Security of supply Energy policy Climate protection