Secure and stable electricity supply that is available around the clock is still not a matter of course in many African regions. A staggering 600 million Africans, representing a good 40 percent of the continent’s population, continue to live entirely without electricity. Relatively small investments could change this, declares the International Energy Agency (IEA) in the Africa Energy Outlook 2022 it just released.

In the Sustainable Africa Scenario (SAS), the report reveals a way to create an expansive power grid in Africa by 2030, which would mainly transmit electricity from renewable sources of energy. The outlook claims that there are ample resources for producing sufficient volumes of green electricity. Solar and wind are considered to be the keys to a reliable and sustainable supply of electricity. The authors believe that African nations should enable the expansion of renewable energy and power grids by implementing clear strategies and measures. In addition, the experts are convinced of the need to step up international financial support.

The study finds that some 25 billion dollars in annual investment are needed to give the African population continent-wide access to electricity by 2030. This would represent a mere one percent of current energy expenditure worldwide and, citing the IEA experts, roughly equal the cost of building a single large-scale liquefied natural gas terminal. But the authors caution that although total investment may seem comparatively low, the continent is reliant on increased international support.

According to the report, more than 22 of the 25 billion dollars would be used to expand the electricity supply system: network infrastructure, power plants and independent projects. And roughly 2.5 billion dollars would be dedicated to the increased distribution of modern cooking appliances, as many still burn dung, wood and charcoal to prepare meals. According to the IEA, these investments in the electricity system would lay the foundation for Africa nearly doubling its power production capacity from an annual 260 gigawatts (GW) to 510 GW by 2030.

Once enlarged, the power grid could mainly be fed renewable energy. After all, Africa’s potential is enormous: It is home to over 60 percent of the best space for solar power around the globe. However, only about one percent of the world’s installed solar capacity can be found on the continent. Expanding this energy source is thus the key to Africa’s sustainable development.

Africa’s placing last in the renewable continent ranking is due in part to a lack of state support and insufficient financing. This is because many of its nations and companies have little financial resources. In addition, the COVID-19 pandemic coupled with mounting energy and commodity prices have further intensified the problems faced by many African countries.

Expansion of electricity generation capacity in Africa in the SAS, 2011-2030

Altogether, renewable sources of energy such as water, the sun, wind and geothermal could account for nearly 80 percent of newly built capacity by 2030. This scenario has investment in the construction of new coal-fired power stations dropping rapidly. No new coal power plants would be built in Africa on completion of those presently under construction. Redirecting capital expenditure originally envisaged for these coal power stations to photovoltaics (PV) assets would cover half of the cost of the total expansion of African PV capacity by 2025.

Will solar energy finally flow across the Med? Read more

Africa as a leading hydrogen player

Green hydrogen could also play a pivotal role in Africa’s energy transition. According to the report, potential in this area is huge, thanks to the continent’s renewable resources. At present, hydrogen is mainly used to produce ammonia-based fertiliser, but is mostly obtained from gas or coal.

Hydrogen production potential in Africa in 2030 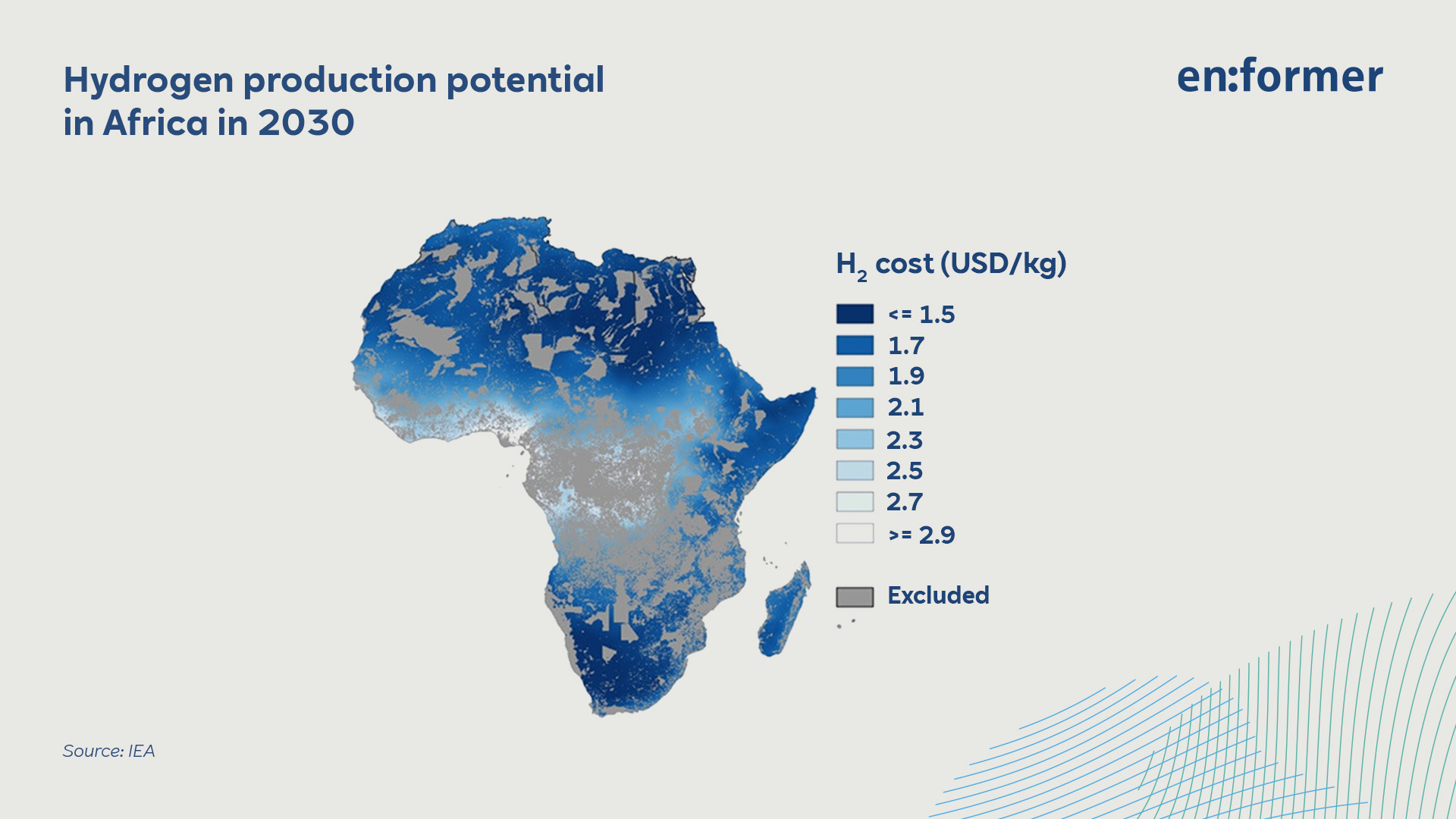 Hydrogen production potential in Africa in 2030

Some low-carbon hydrogen projects in Egypt, Mauritius, Morocco, Namibia and South Africa are already in the planning stage. Spurred by the globally declining cost of hydrogen production, Africa could output as much as 5,000 megatons of hydrogen every year for less than two US dollars per kilogramme by 2030. IEA experts believe this could be exported to northern Europe and other regions.

The report clearly shows that relatively low capital spending on the expansion of electricity grids and renewable energy could put Africa on course for sustainable development. And later on, the continent’s nations could benefit from favourable conditions to produce green hydrogen at low cost and sell it abroad.

Therefore, to obtain an expansive, sustainable energy network as described in the SAS, the continent must overcome several hurdles. First and foremost, these are financial in nature, as energy investments in Africa would have to double by 2030 for the scenario to play out.