Hydrogen is integral to the EU’s roadmap towards achieving climate neutrality by 2050. CO2-intensive sectors in particular, such as manufacturing, can harness H2 to make a tangible contribution towards reducing emissions – particularly if the hydrogen is produced sustainably with renewable energy. According to think tank Agora Energiewende, industrial H2 demand in the EU’s 27 member states could hit 270 terawatt hours (TWh) by 2050 – a move that would make a well-developed infrastructure indispensable for meeting demand. In their recent report titled “No-regret hydrogen: Charting early steps for H₂ infrastructure in Europe” the experts at Agora Energiewende, in collaboration with British consultancy firm AFRY Management Consulting, have identified four European regions with particularly favourable conditions.

The aim of their analysis is not simply to identify suitable starting points for the European hydrogen network. By focussing on sectors for which high demand is anticipated in the coming years, the authors hope to reduce the risk of an oversized infrastructure at market launch. The experts believe that green hydrogen will only come to replace fossil fuels in the late-2020s. They therefore recommend prioritising targeted investments in areas with promising conditions.

With this in mind, the report has assessed various implications of a “no-regret” supply, which is focussed on demand in the early phases of the hydrogen economy. Industrial clusters, acting as centres of demand for fuel, take centre stage here. The steel industry, in particular, but also chemical production plants and refineries are likely to be amongst the biggest consumers moving forward.

As proximity to renewable capacities also plays an important part in ensuring manufacturing plants receive their supply of green H2, the experts have also considered the potential for wind and solar.

While wind power clearly reigns king in northern and central Europe, energy supply in southern countries is more focussed on solar. In both cases, however, off-grid hydrogen production is then affected by fluctuations: when there is no wind and the sun is not shining, electrolysers risk suffering a shortage of power. This makes nearby storage solutions such as salt caverns necessary to secure production. Transport options including converted natural gas pipelines are another benchmark of the report. 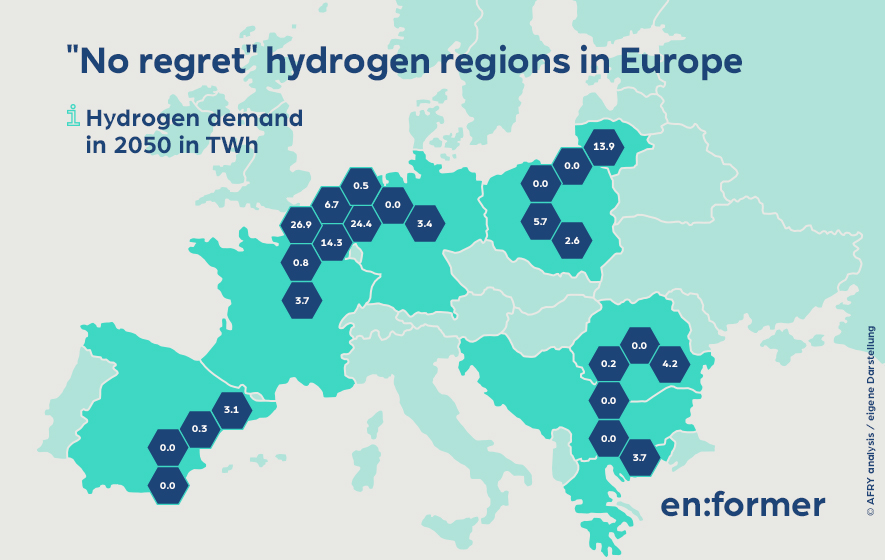 A grand total of four areas across Europe meet all these criteria. A broad strip along the German North Sea coast via the Benelux countries to France, a large part of the Spanish Mediterranean coast, an expanse between southwestern Poland and Lithuania, and an area in southeastern Europe stretching from eastern Greece to Romania all fit the bill. According to the authors, these areas should be given particular focus when building a hydrogen economy, recommending the regions to investors as robust “no-regret” corridors.

The study shies away from envisaging a pan-European network for now. However, if demand in sectors such as energy, aviation and shipping were to increase in future, this would make a convincing case for additional pipelines – after all, various scenarios envisage demand of up to 2000 TWh in 2050 across all sectors within the EU.