Offshore wind has been identified and prioritised by the Taiwanese government as a key part of the solution to the country’s unique energy challenges. Taiwan’s electricity mix is currently dominated by coal-fired generation, which the government wants to reduce to limit both greenhouse gas emissions (GHG) and local air pollution. In 2019, coal-fired power generation made up 47% of total generation.

The government’s policy is to cut coal’s share of the fuel mix by 1% a year and it has banned the construction of new coal plant.

The government also wants to phase out nuclear power by 2025. A referendum in 2018 backed the repeal of the ‘nuclear-free homeland’ by 2025 policy, but the government remains committed to the phase out and the Democratic Party’s Tsai lng-wen was re-elected president in 2020.

The country has three nuclear reactors, one of which, Jinshan, has entered the decommissioning phase, while the remaining two, Kuosheng and Maanshan, have operating licenses only until 2023 and 2025 respectively. Construction of a new reactor, Lungman, was suspended in 2015.

Nuclear power, which accounted for 12% of electricity generation in 2019, is thus expected to fall to zero post-2025.

On top of this, electricity demand in Taiwan has been on a fairly steep upward trajectory since the 1970s and, although the Covid-19 pandemic has dented that growth, demand for power supplied by the state company Taipower, which makes up the bulk of electricity generation, still rose from 232.47 TWh in 2019 to 238.93 TWh in 2020.

Prior to the pandemic, the country’s Bureau of Energy was forecasting that total power generation – Taipower plus the country’s independent generators — would increase from 278.3 TWh in 2019 to 313.2 TWh by 2025.

Renewable energy benefits Taiwan in three important ways — by reducing its heavy dependence on imported energy commodities, by providing a large-scale source of green power and by creating opportunities for development via local supply chains to support the sector.

However, renewable options for a relatively small and densely-populated island are limited. The country’s hydro potential is already in use, and, while solar generation has risen from 0.9 TWh in 2015 to 4.1 TWh in 2019, and is certain to increase further, solar farms are land intensive, while onshore wind capacity, which stood at 717 MW at the end of 2019, also involves land occupation.

As a result, LNG, the country’s second largest fuel source for electricity generation, is likely to play an increasing role in displacing coal-fired generation. Taiwan imported 17.76 million tons of LNG in 2020, up 6.6% year on year.

However, the government has also looked offshore to its marine resources and was an early leader on the Asian offshore wind scene.

Its first offshore wind farm, Formosa 1, Phase 1 was completed in 2017 and consists of two 4 MW wind turbines. Phase 2 of the project added 120 MW in 2019 and a further 376 MW is expected to come online this year from the Formosa 2 project.

Building on this promising start, the government has steadily upped its ambitions for offshore wind and expects to have 5.7 GW in operation by 2025 following selection and auctions rounds in 2018 that resulted in 5.7 GW of capacity being allocated to developers.

Formosa I phase 1 got the first offshore wind power commercial operating license in April 2017 from Taiwan Ministry of Economic Affairs. 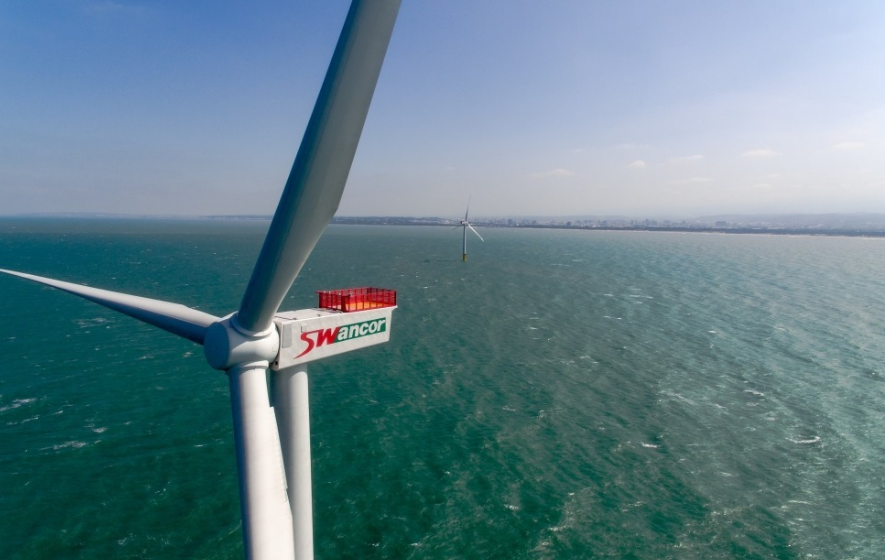 Formosa I phase 1 got the first offshore wind power commercial operating license in April 2017 from Taiwan Ministry of Economic Affairs.

Then, in May this year, the government proposed a further 15 GW for construction between 2026-2035, equating to 1.5 GW of capacity a year, which would make it one of the largest offshore wind markets in Asia-Pacific.

Taiwan has shown itself open to foreign investment, allowing it to draw on the expertise of European offshore wind developers, while also starting to build up a domestic supply chain to service the construction of new capacity.

This openness has attracted developers such as RWE Renewables, which is working with the Asia Cement Corporation to develop the 448 MW Chu Feng project off the northwest coast of Taiwan in the windy Taiwan Strait.

The government has also done much to underpin the development of corporate power purchase (PPAs) agreements as an addition to the country’s feed-in tariff system for supporting renewable energy development. Corporate PPAs mobilise private sector capital and provide offshore wind developers with revenue certainty, which in turn allows them to raise money from banks for project development.

As a result, while the country’s efforts to liberalise its electricity market are still progressing, they have moved ahead faster in the provision of renewable energy.

In all – clear targets, market openness, electricity market reform and ease of financing – make Taiwan one of the most attractive offshore wind markets in Asia.

The technology has assumed a central role in the government’s efforts to meet both its near-term target of raising renewables’ contribution to electricity generation from 5% in 2019 to 20% by 2025, and now its longer-term goal of building an additional 15 GW of offshore wind capacity between 2026-2035.

Clean energy spending growth is expected to slow in 2023, but should rebound as inflation concerns recede
Read more
2023-01-27