Stand on the cliffs at Praia do Norte in Portugal and look down at the site of the largest waves ever surfed, and it is impossible not to be impressed by the immense power of the ocean. Harnessing just a fraction of this energy has long been a goal of engineers in the renewable energy sector, a quest which has gained in urgency as the threat of climate change has become better understood. Multiple avenues have been investigated from tidal barrages, lagoons, subsea turbines to wave power and technologies which seek to exploit either the temperature differences between surface and deep water or differences in salinity between fresh and sea water.

Yet the number of marine energy projects remains small – the 240 MW La Rance tidal barrage in France, built in 1966 and still operating today, the 20 MW Annapolis Royal Generating Station in the Bay of Fundy in Canada, built between 1980 and 1984, and the 254 MW Sihwa Lake tidal power station in South Korea, constructed in 2011, are the largest. Elsewhere, for example in Russia, China, the Netherlands and UK, there are 6 MW or smaller projects. But worldwide, marine energy capacity totals only 531 MW, less than a single large offshore wind farm, generating 1,002 GWh a year, according to the International Renewable Energy Agency. With regard to the goals of the Paris Agreement on Climate Change, the International Energy Agency (IEA) labels the sector’s development as ‘not on track’.

However, the tide may be starting to turn. In February, Japan took an important step towards exploiting the tidal streams that flow in and around the country’s near 7,000 islands. An AR500 tidal turbine, built by Simec Atlantis Energy in Scotland, was installed in the Straits of Naru Island within the southern Japanese Goto island chain. The turbine generated 10 MWh of electricity within its first ten days of operation. Offshore construction – laying the cable to connect to shore, landing the foundation structure and ballast, connecting the cable and installing the turbine to the foundation took just five days.

This is what it looks like: A tidal turbine by Simec Atlantis Energy was installed within the southern Japanese Goto island chain. 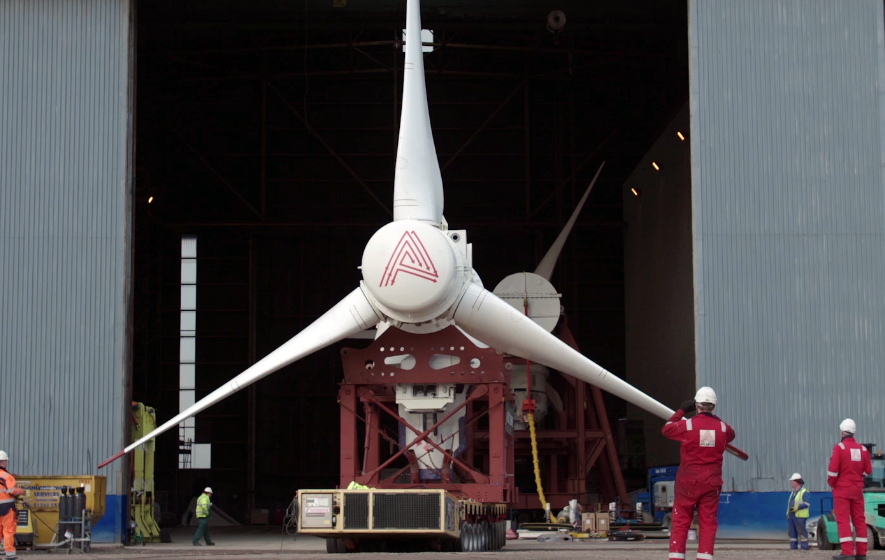 This is what it looks like: A tidal turbine by Simec Atlantis Energy was installed within the southern Japanese Goto island chain.

The turbine is the fruit of years of development at the MeyGen project in Scotland, which is the largest array of tidal turbines in the world. The first phase of this project involved the deployment of four 1.5 MW turbines off the Scottish mainland’s northernmost point where one of the world’s fastest tidal streams flows daily between the mainland and the now uninhabited island of Stroma. A second phase, Project Stroma, aims to connect two larger turbines via a singe subsea hub, rather than have individual cables for each turbine, thereby reducing costs. In all, the project has consent for 49 more turbines and total capacity of 86 MW.

Tidal energy may be intermittent, but it is predictable years in advance and the high density of water allows power generation even at low speeds. The global tidal energy resource has been estimated by Ocean Energy Systems (OES), a 25-member technology initiative by the IEA, at 1,200 TWh/yr. Another estimate from the Danish Hydraulic Institute put the potential at 75 GW. In Europe, estimates suggest over 12 GW with the best sites around the UK and Ireland, between France and the Channel Islands, as well as in the Aegean Sea and the Straits of Messina between Italy and Sicily.

However, cost is still a key barrier to deployment. OES, in a 2015 study, forecast the levelised cost of electricity (LCOE) for the first commercial-scale project in a range of $130-$280/MWh, but anticipated a 61% reduction between then and actual deployment with further falls likely as developers gain experience. Cost reductions are being made. Simtec Atlantis estimated last year the LCOE for its new projects at about £100/MWh ($140/MWh). In addition, the EU-funded TIPA consortium last June unveiled a new tidal turbine generator, which, it said, reduces the cost of tidal turbine power by 29%. The direct drive generator has no gearbox, allowing more efficient conversion of tidal energy into electricity.

Meanwhile, a UK team of scientists are initiating a 12-month programme to use drones to assess tidal flows and speeds in order to identify ideal sites. This could prove substantially cheaper than using survey vessels or installing special sensors on the seabed. There are also potential synergies with offshore wind, for example experience in laying offshore foundations and cables.

Wind, both on and offshore, and solar have shown that costs can be brought down quickly as deployment grows, if support is provided at the pre-commercial stage. As such, the UK’s fourth round of contracts for differences – a support scheme for renewable energy – may prove a turning point when held later this year. The UK government has divided the available capacity into different ‘pots’, including one for less-established technologies, allowing tidal stream projects to compete against other pre-commercial renewable technologies rather than wind or solar.