In one of the many worlds envisaged in science fiction author Ian M. Banks’ Culture series, one depicts humanity floating around a giant sea world on huge ships powered by bolts of electricity fired from offshore floating wind turbines.

Although the transmission of power without wires over short distances is possible, it remains far off commercial application, but elements of Banks’ futuristic vision are emerging in a demonstration of how renewable energy technologies can open new possibilities for sustainable development in other sectors of the economy.

From hybrid to fully electric

Shipping is responsible for 2.5% of global greenhouse gases (GHGs), according to the International Maritime Organisation’s third GHG study. However, ships are hard to electrify because of the size of batteries required and the long distances travelled without the possibility of recharging.

The construction of offshore wind farms means there are now sources of electricity at sea which could be used to recharge vessels. A consortium of renewable energy and marine companies are investigating the possibility of a permanent offshore charging vessel, a project which has received funding from the UK government’s Sustainable Innovation Fund. Moreover, in Denmark, offshore wind developers last year unveiled a different concept aimed at the same goal, using a buoy as both a mooring and recharging point. They hope to deploy a prototype this year.

The idea has to be seen within the context of new developments in shipping, port services and particularly the vessels used to build offshore wind farms.

The latest offshore construction vessels, for example Les Alizes, a 5,000 ton crane vessel, are electric hybrids, which replace one of the ship’s conventional generating sets with a battery. Batteries are much more responsive to sharp changes in load and therefore provide operational efficiencies which result in significantly lower fuel consumption. Not only that but electricity can be recovered from the crane operations to recharge the battery — like regenerative braking in hybrid electric cars.

However, the battery at sea in electric hybrid vessels is currently recharged by conventional generating sets. A permanent offshore charging vessel or recharging and mooring buoy would provide a cleaner recharging option. They could also power fully-electrified Crew Transfer Vessels and Service Operating Vessels which are used to sevice offshore wind farms. The deployment of electric ferries in Norway shows that electrification is already possible for vessels with defined point-to-point journeys, if there is recharging capacity at both ends. The first of these, Ampere, entered service in 2015 and today crosses the Sognefjord 34 times a day.

The "Ampere" operated by the Norwegian shipping company "Norled" has already been sailing since 2015. 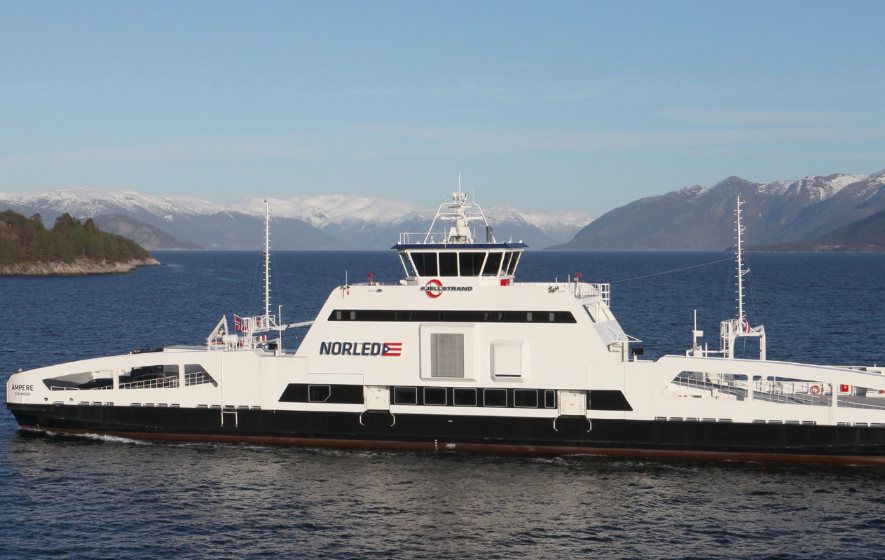 The "Ampere" operated by the Norwegian shipping company "Norled" has already been sailing since 2015.

The provision of clean power to ships brings other benefits. The EU, through its Connecting Europe Facility, has been supporting the installation of onshore power-to-ship facilities at major ports. This allows ships in port to run heating, cooling, lighting, and other activities such as on and off-loading on electricity rather than generating power from the vessels’ fossil fuel generating sets, thus reducing GHG emissions and improving port air quality.

The development of offshore mooring and recharging buoys and permanent offshore charging vessels could extend this concept more broadly around ports, so that ships could access power without taking up space on the quayside. Similarly, they could even use offshore charging points as way stations for longer journeys. Plug-in offshore power looks a lot more practical (and safer) than lightning bolts, and while it is early days in exploring the possibilities offshore wind might offer for the decarbonisation of shipping, some of the basic elements of Banks’ futuristic vision are already falling into place.