The German government is working towards covering 65 percent of the country’s power consumption with renewables by 2030. In order to hit this target, a considerable number of solar and wind farms will need to be built in the coming years. However, this will only aggravate an issue that we already know only too well: Regeneratively produced power is being veritably thrown away as it can’t be stored. There is a lamentable lack of energy storage systems.

It is an all-too-familiar picture: A number of wind turbines remain motionless, despite the howling gales – their blades stationary, even though the rotor could be turning and the wind turbine could be generating power. These wind turbines have been consciously shut down, as the grids can’t transport their power due to capacity shortages. This summer, the Federal Agency announced that in the first quarter of 2019, 3,265 gigawatt hours of electricity was wasted for this very reason – enough power to supply one million two-person households for a whole year. The conclusion is clear: There is an urgent need for new and more efficient power lines.

But power lines alone are not enough. Large-scale energy storage is also becoming increasingly important, according to experts, as renewable sources take on the task of generating the lion’s share of electricity. These storage units will be used to accommodate excess electricity from wind farms and solar arrays, making the power available once more when needed, for example during a renewables lull when there is no wind and the sun is not shining. In this way, electricity generation and power consumption are to be made independent of one another.

As reported previously by en:former, such heavy-duty energy storage systems can take the shape of massive batteries, i.e. large-scale lithium-ion batteries. However, as it stands, these battery storage systems are still very expensive and do not have the capacity to store large quantities of excess electricity. Currently, they mostly function as an operating reserve with numerous short charging and discharging cycles. Companies are thus working on other new ways to store energy, and thermal energy is the hot topic du jour.

At first glance, it may seem surprising that Siemens Gamesa has developed a heat-based energy storage system. After all, the world’s second-largest turbine manufacturer is generally associated with blustering winds, lofty heights and a considerable amount of steel – not so much with hot air, steam turbines and volcanic rock. However, upon closer inspection, it makes perfect sense. The company knows that powerful and cost-effective storage systems are the perfect partner for the expansion of unpredictable wind energy.

But first things first: Siemens Gamesa has been running the world’s first electric thermal energy storage (ETES) pilot plant since mid-June in the docks of Hamburg. This innovative technology uses rock as an energy storage medium, or – to be precise –1,000 metric tons of volcanic rock. The heat storage system works as follows: Electricity drives a resistance heater and a blower, in other words a giant hair dryer of sorts. The hot air current generated in this way heats the volcanic rock to around 750 degrees Celsius. Electricity is thus converted into heat and the energy can be stored for up to a week.

If necessary, the heat can be used to drive a steam turbine to generate electricity. According to company data, the ETES can store around 130 megawatt hours of thermal energy, enough to easily supply 12,000 homes with electricity for a full day. Siemens Gamesa wants to test the technology through the pilot project, the development of which cost around 29 million euros. Power utility Hamburg Energie and the Technical University of Hamburg (TUHH) are also involved as project partners.

“We want to store large amounts of energy cost-effectively and feed it back into the grid over a longer period of time. We expect an efficiency level of 45 percent for large-scale applications,” explains Maximilian Schumacher who is responsible for the business development of large storage facilities at Siemens Gamesa in Handelsblatt (in German). Following a successful test phase, storage capacity and performance are to be significantly improved to several gigawatt hours in the foreseeable future. As a frame of reference: One gigawatt hour corresponds to the daily electricity consumption of approximately 50,000 households. 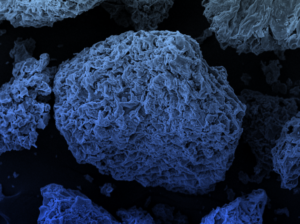 Vattenfall are relying on salt instead of than volcanic rock. The energy utility is testing ways in which to store excess electricity from renewable sources in a test plant in Berlin. The advantage of salt is: It can store up to ten times more energy than water, for example, giving it great potential as a storage medium.

In the pilot plant at the Reuter cogeneration facility, however, rather than conventional table salt, they use specially treated grains. Swedish-based SaltX, also a partner in the project, has developed a technology that makes it possible to coat every grain of salt with a special nano-layer. According to the company, the special coating allows the salt to be charged and discharged thousands of times without losing its properties.

The basic principle of the heat accumulator is relatively straightforward: Wet salt is brought to boil and thus separated from the water (dehydration). Excess electricity is used for this drying process. In this way, energy is stored in chemical form. In order to release the stored energy from the dried salt, both substances – salt and water – must be combined once more (hydrogenation).

In the pilot plant, water vapour is used instead of water, because unlike conventional table salt, the nano-coated and thus water-repellent salt does not absorb water. The water vapour converts the calcium oxide to calcium hydroxide, thereby heating the salt to a temperature of 550 degrees Celsius. The released energy can be used to feed hot water into the Berlin district heating network via heat exchangers, but another option would be to drive a turbine to generate electricity using water vapour generated during the process.

One great advantage of this technology is that the chemical process – not the heat – is used to store the power. As long the chemical process is not triggered by water vapour, the energy contained therein can be stored indefinitely and in large quantities. According to Vattenfall, the pilot plant, which consists of two parallel working flows, has a total capacity of five megawatts and contains 15 cubic metres of salt per working flow. It was put into operation in March and is scheduled to run in trial mode for several months. 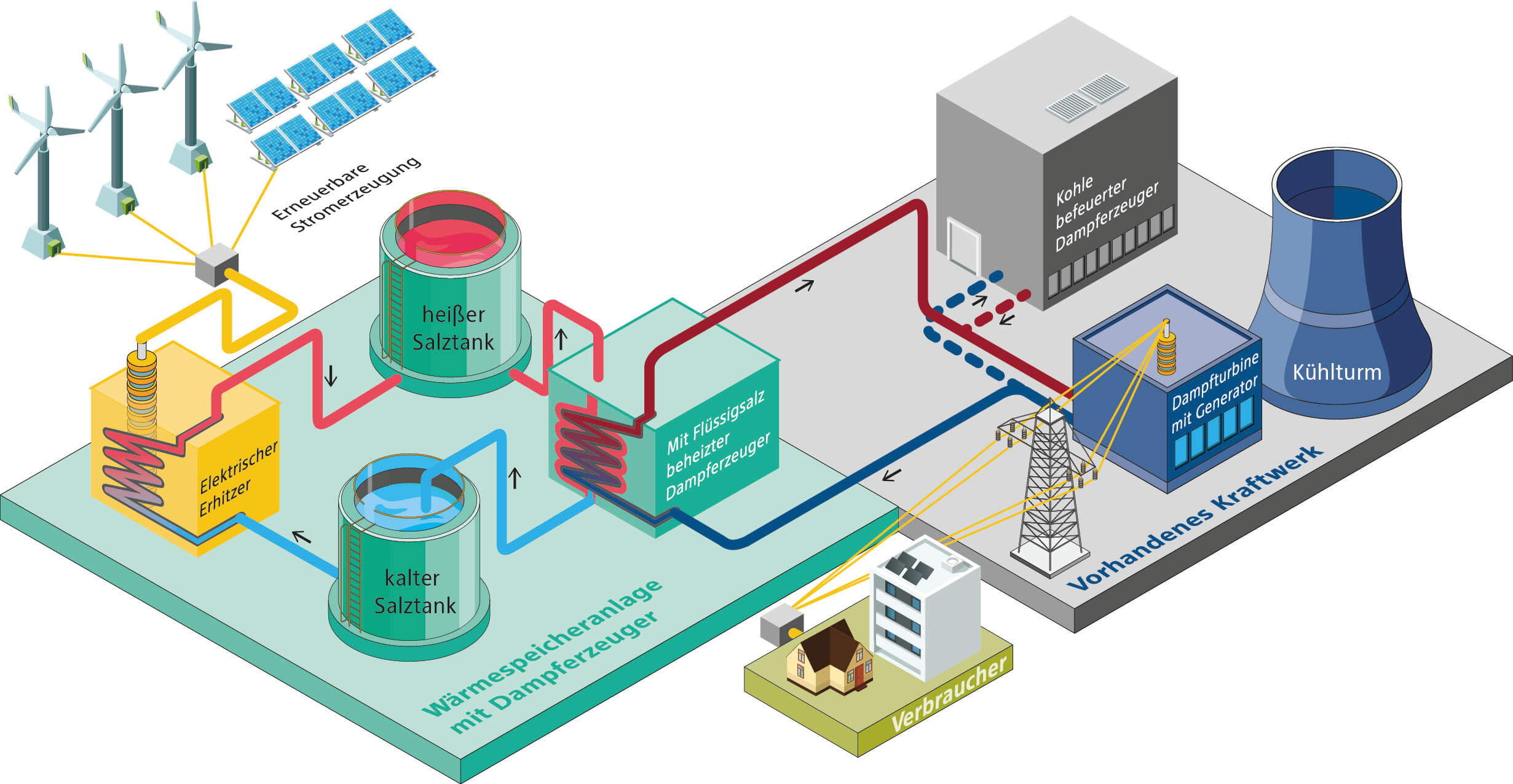 Schematic representation of the conversion of a coal power plant to a heat storage power plant (Source: RWE).

RWE is also working on a way to store excess electricity from wind farms and solar arrays on a large scale. Together with the German Aerospace Centre (DLR) and the Aachen University of Applied Sciences, RWE Power is developing a heat storage power plant in the Rhenish coal mining region as part of the StoreToPower collaborative project, on the premises of a coal-fired power station.

Similar to the pilot project in Hamburg, salt is also being used in this heat storage power plant. Instead of using specially coated salt grains, the project is being conducted on the basis of liquid molten salt. Using excess electricity from renewables, the liquid salt is heated to a temperature of up to 560 degrees Celsius in an electric heater and then fed through pipes to a large tank, where it is stored loss-free for up to 24 hours.

If there is a need for additional electricity, the hot liquid salt is fed into a steam generator. There, the liquid salt heats water from the cycle of the coal-fired power plant. The steam generated in this way is fed into the turbine circuit of the power station unit to generate electricity. It thus replaces part of the steam otherwise generated with coal. The liquid salt, which is still around 290 degrees hot, is pumped into the first salt tank and stored until it is needed again.

The pilot project also has the support of politicians. This is how it was selected by the German Ministry of Economics in the Real Laboratories of the Energy Transition ideas contest. With this competition, the country’s government wants to promote the testing of sustainable energy technologies under real conditions on an industrial scale, thereby driving the energy transition. The planned heat storage power station is amongst the 20 winners.

You can find more information on the StoretoPower collaborative project and on the purpose of the heat storage power plant here. Read more
Learn more about the winners of the Real Laboratories of the Energy Transition ideas competition here. Read more

The new round broadens the eligible types of technology and reserves funds for those the government wants to encourage.
Read more
More about Energy transition Research and Development