Narrower lines, more capacity, less energy losses – this is what the developers of superconductors promise. The German energy group RWE and the French cable manufacturer Nexans are among the pioneers of this technology, which has already proven to be successful when put into practise in Essen. In fact, two systems are close to market maturity, and it looks as if they are shaping up to be no more expensive than conventional alternatives.

High-voltage cables call for a station which is the size of a gym. Superconductors, on the other hand, only need a double garage. Frank Merschel, AmpaCity Project Manager, innogy SE

AmpaCity is able to transport the same amount of electricity as the previous high-voltage line that it replaces in the grid of the Ruhr metropolis, with the advantage that the current now flows at a medium-voltage level within the superconductor. This renders the huge transformer superfluous, which served to reduce the current from 110 kilovolts (kV) to 10 kV. The end terminal blocks of the superconductors and the other components of the system that carry the current to the customers are considerably smaller: “High-voltage cables call for a station which is the size of a gym. Superconductors, on the other hand, only need a double garage,” says Merschel. This is an immense advantage, especially in densely populated areas such as inner cities. In order to supply the 750,000 inhabitants in Essen and the neighbouring town of Mühlheim, the operator of the distribution network, Westnetz, has installed around 50 such ‘gymnasium’ stations alone.

In order to reach the temperature of -200 degrees Celsius, the cables are sheathed in an insulating sleeve that carries liquid nitrogen. 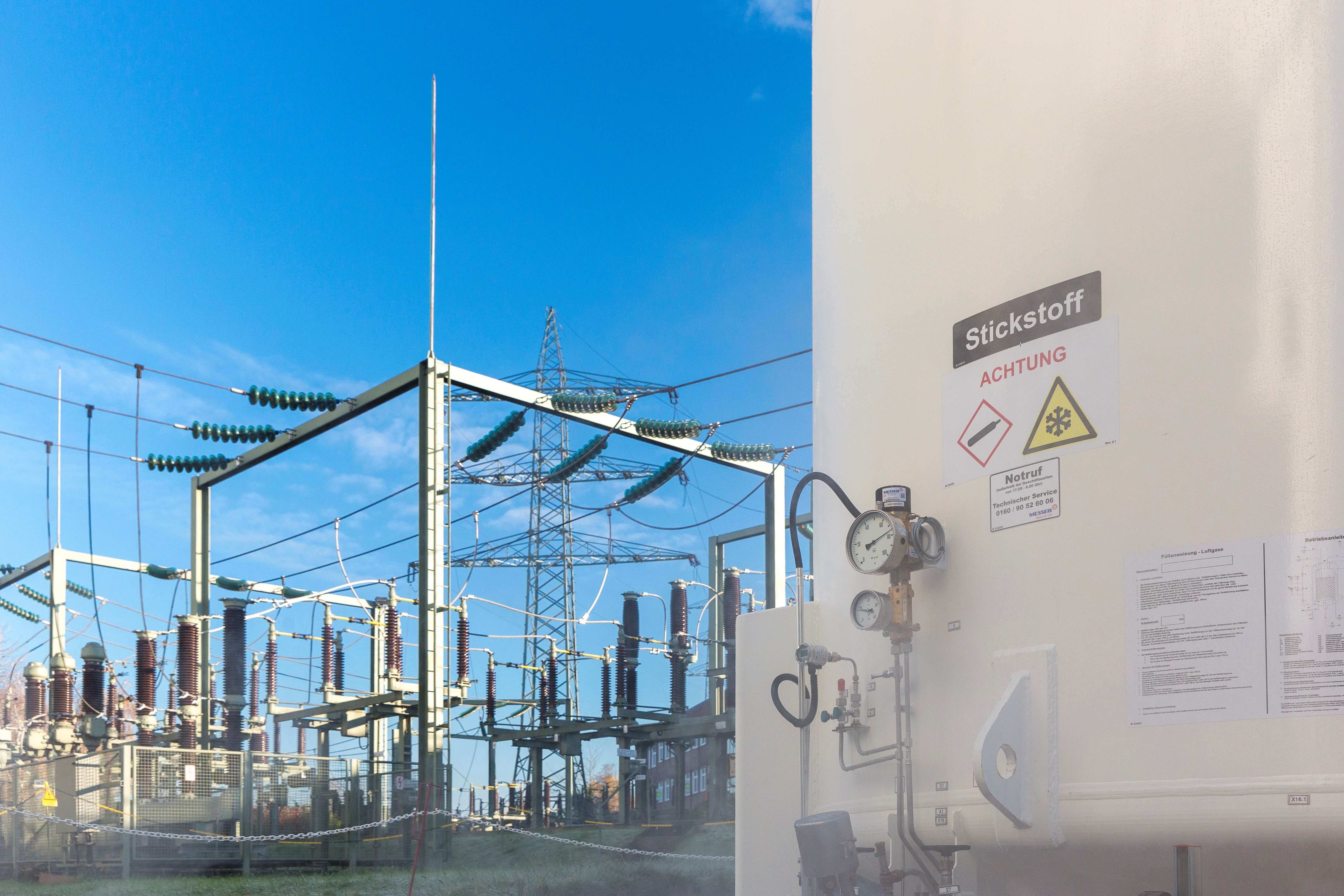 In order to reach the temperature of -200 degrees Celsius, the cables are sheathed in an insulating sleeve that carries liquid nitrogen.

The secret of superconductors is their temperature. In 1911, Dutch native Heike Kamerlingh Onnes discovered that the electrical resistance of some materials suddenly drops to zero in extreme cold conditions. This ‘superconductivity-onset temperature’ is usually near the absolute zero of 0 degrees Kelvin, i.e. -273.15 degrees Celsius. The German researchers Karl Alexander Müller and Johannes Georg Bednorz provided the first trend-setting research results on superconductors in the 1980s. In 1987 they were awarded the Nobel Prize in physics for their work.

Since such low temperatures can only be achieved under laboratory conditions, researchers have repeatedly looked for materials with higher transition temperatures – known as ‘high-temperature superconductors’ (HTS). And their search has proven successful.

The ceramics used in the AmpaCity cables ‘already’ unfold their superconductivity at 70 degrees Kelvin, i.e. -200 degrees Celsius. In order to reach this temperature, the cables are sheathed in an insulating sleeve that carries liquid nitrogen. The necessary cooling systems, pumps and transformer fit into the aforementioned “double garage”.

Among the metallic superconductors, magnesium diboride (MgB2) has the highest superconductivity onset temperature known to date. It has been determined to be at around 39 degrees Kelvin, -234 degrees Celsius. Superconductors made of magnesium diboride have a number of advantages over those made of ceramics, says Dr. Adela Marian of the Potsdam Institute for Transformative Sustainability Research (IASS): “The raw materials magnesium and boron are more readily available, production is easier and the cables are more robust.”

The MgB2 cables are therefore much cheaper to manufacture than those used in AmpaCity. On the other hand, cooling technology is more expensive: “50 degrees colder – that makes a considerable difference,” Marian explains and clarifies: “Ceramic superconductors are ideal for the current and voltage in distribution networks. The issue is the transmission networks.”

Marian has researched MgB2 superconductors as part of the EU’s Best Paths initiative. As the scientific coordinator, she was in charge of the project, which brought together the results from the participating research institutes and companies. September 2018 marked the end of the project and according to Marian, the results are promising. Her colleagues at CERN in Switzerland had shown that superconductors can be used to transport extremely strong current without suffering losses. The French cable manufacturer Nexans has tested the transmission with maximum voltage at its location in Hanover – and has also been successful.

Only the combination of both – high current and maximum voltage – has not yet been tested: 320 kV at 10 kiloampere (kA), which corresponds to 3.2 gigawatts (GW), i.e. the demand of 3.2 million people. You can’t simply use this much electricity for testing purposes, says Marian. Nevertheless, one thing is for sure: “A cable as thick as a finger is enough to transmit this power.”

As is the case with other underground cables, the electromagnetic radiation emitted by overhead lines plays practically no role when it comes to superconductors, however their compact design makes them superior from an environmental point of view. A 10 GW power line with two cables requires a corridor spanning only one meter. Conventional lines of this size are ten metres wide. The related ground heating, as otherwise generated by extra-high voltage underground cables, is also eliminated.

“This bodes very well for public acceptance,” Adela Marian suspects. Superconductors could thus significantly accelerate the expansion of the transmission grid. For years, protests have arisen in many countries where lines are to be built. This is why, according to the IASS expert, new transmission lines in France are virtually exclusively laid underground.

Yet critics point out that hydrogen, which is used to cool very long MgB2 cables in particular, can explode if it suddenly comes into contact with air. “This is of course correct,” admits Marian, “but Europe is covered by a gas network. And the natural gas contained within it is no less explosive.”

More powerful, more compact and more environmentally friendly – so what’s stopping network operators? The truth of the matter is, many transmission system operators are fundamentally interested in the technology, emphasizes Marian. The largest operator in the European Union, the French monopolist RTE, was even a partner in the research project, and a socio-economic calculation carried out on behalf of RTE showed that the costs could even be lower than those of conventional underground power lines.

However, transmission system operators have long investment cycles. And a bad investment of this magnitude can have dramatic consequences. Marian: “Political incentives could encourage network operators to test and apply the technology in practice, i.e. in the electrical network.”

The excuse of lack of ceramic-based superconductor field tests no longer applies. “We have proven the technical functionality, now we just have to demonstrate the economic feasibility”, says AmpaCity project manager Merschel. “And here we have a chicken and egg situation.” What Merschel means: Potential manufacturers will only invest in the relevant production facilities if demand is high. And only then will they be able to offer HTS systems at competitive prices. But only when prices become more attractive will the network operators become involved instead of remaining passive observers.

After all, according to Merschel, several major German cities have already expressed interest in HTS technology.

In the next episode of the ‘Grid Expansion’ series, we will be taking an international approach and looking at the challenges other EU countries are facing when it comes to grid expansion.

Part IV of the series: "High above the trees or under the ground" Read more