Europe’s electricity grids need to become more efficient. But their expansion has ground to a halt – partly because the public in many places are resisting the construction of new lines. Underground cables and other technical innovations are possible alternatives – particularly if existing cables are simply ‘upgraded’ to higher transmission power. In Part 4 of the Grid Expansion series, we shed some light on the technical side of network expansion and show how compact power lines, underground cables and superconductors can help accelerate network expansion without being a nuisance to the public and affecting local flora and fauna.

It’s not as if anyone considers them to be particularly attractive. In fact, quite the opposite: Many people would say that high-voltage power lines are a bit of an eyesore. Not to forget that they can only be built at a certain distance from residential buildings. On the one hand, this is due to the fact that electromagnetic radiation in high and permanent doses is considered a health risk. On the other hand, the noise generated by high-voltage power lines, in periods of high humidity in particular, is also an issue.

Bearing this in mind, it is proving to be quite the challenge to locate any suitable power line corridors at all, particularly in densely populated areas such as the German state of North Rhine-Westphalia, South-East and North-West England or the Netherlands. Therefore, transmission system operators are increasingly relying on using existing lines for larger quantities of electricity, not least considering it cuts costs. New lines are also being planned with larger transmission capacities than ever before, as the more electricity that flows on a single electricity highway, the fewer new highways will need to be built.

By using existing power lines, masts can often be left standing while only the ropes, i.e. the power lines themselves, are replaced. A 110 or 220 kilovolt (kV) high-voltage line is thereby transformed into a 380 kV ultrahigh-voltage line.

Sometimes, high-temperature conductor ropes with carbon fibre or ceramic cores are used for this purpose. Instead of the normal 80 degrees Celsius, they can withstand a permanent operating temperature of 200 degrees without the danger of sagging, which could become a problem depending on the height of the masts. The downside is that power losses, which occur during almost every power transmission, also increase in tandem with the rising operating temperature.

But even if new masts have to be built, it could all be worthwhile. Instead of conventional grid designs, the transmission system operators across Europe are trying out full pylons. They are a little more expensive, but much more compact, making them much less conspicuous.

Generally speaking, these kinds of projects experience significantly more acceptance from the general public than the construction of completely new power lines. However, upgrading existing lines is not without its pitfalls, considering the increase in power – or to be precise: in voltage – also causes the intensity and degree of noise and radiation to increase. Furthermore, depending on the scenario, the originally determined minimum distance to the nearest houses may no longer be sufficient. With the result that network operators are forced to find alternatives.

The solution lies below ground

This is precisely why the ‘Initiative Pro Erdkabel NRW’, for example, has called for ultrahigh-voltage lines to be laid underground. Although the radiation directly above underground cables is higher than under overhead lines, it decreases considerably at a distance of only a few metres. 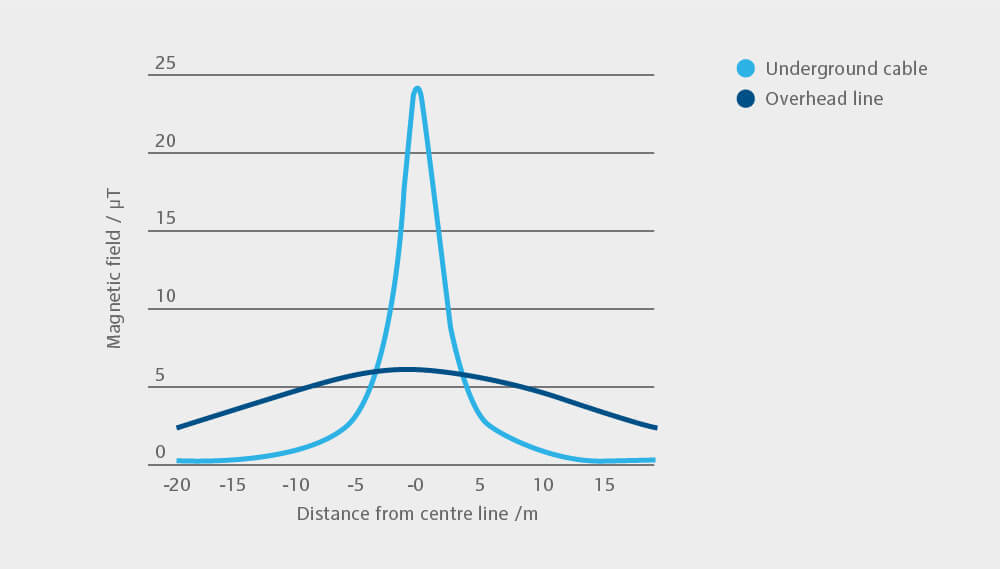 In fact, the majority of Europe’s electricity grids are already underground. But these are almost exclusively the low-voltage and distribution networks. The huge steel lattice masts almost always carry high and ultrahigh-voltage lines with voltages between 110 and 400 kV. But more and more, these power highways are now also being rerouted below ground.

The ultrahigh-voltage underground cable in Raesfeld, Westphalia, is one of the first of its kind in Europe. It is one of a total of three underground sections of the power line connecting the power converter in Dörpen-West in Lower Saxony to the transformer station in Wesel. Direct current from offshore wind turbines arrives in Dörpen, and is then rerouted as alternating current before being fed into the distribution networks in the Lower Rhine region. Once the entire power line has been completed, more than three gigawatts (GW) will flow through the line – enough to supply around three million people with electricity.

Underground cables are not a one-size-fits-all solution

Citizens’ initiatives such as the one in Raesfeld have also gained traction in other locations, but not everyone is happy with the proposed solution. For many farmers, who own fields located above the underground cables, knowing that they will be compensated for crop failures during the construction period and the three-year recultivation phase is of little consolation. They fear that the soil will dry out more quickly as a result of the heat generated. However, all is not lost: initial measurements from the pilot station, which has been running in Raesfeld since 2016, show that the heating of the surrounding soil is in fact well below the projected level.

Yet, even the transmission grid operator Amprion, which is responsible for building the line, remains sceptical, as underground cables cost three to ten times more than an overhead line. Or rather, not the cables themselves but rather the underground construction work involved. 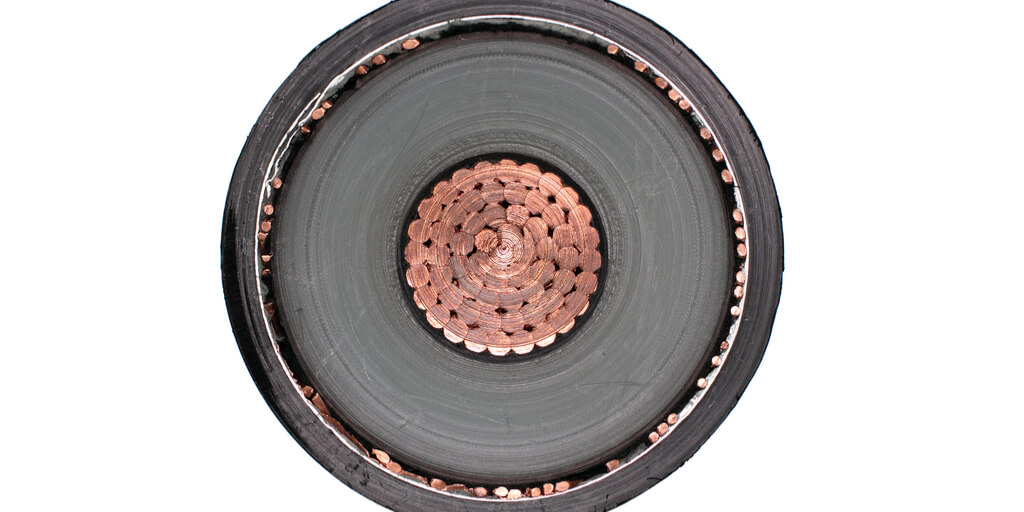 The preparatory work for underground cables is also much more complex, as soil samples have to be taken at much shorter intervals than for overhead lines. The layers of sediment are then removed one by one and later reapplied in reverse order, and if a line needs to pass under roads or bodies of water, the costs rise even more drastically.

In Raesfeld, the construction site circumnavigated the town at a distance of around 40 metres: “We felt as if a motorway was being built around Raesfeld”, Mayor Andreas Grotendorst told German weekly newspaper Die Zeit at the time. The final result is a 24-meter-wide corridor where no trees are allowed to grow, as roots could damage the cable.

For the residents, these inconveniences should pay off in the long term. Not so for the network operator, because maintenance and repair work is also more complicated than with overhead lines. Amprion estimates that it could take three to four weeks to rectify a fault. With overhead lines the issue can usually be resolved on the same day. It is therefore clear that underground cables only make sense in certain rare cases not just in terms of costs, but also in terms of security of supply.

Further information about underground cables is available on the website of the transmission system operator Amprion. Read more

However, ultrahigh-voltage direct current transmission lines – HVDC lines for short – in particular are considered to be worth the expense. According to the German Network Agency, it is more likely that they will be built as underground cables.

HVDC cables are used to transmit direct current instead of the conventional alternating current. On the upside, it is thus possible to transmit larger quantities of electricity in this way. On the downside, this means that the electricity has to be converted at both ends of the HVDC lines, because alternating current is favoured for production and consumption. But the necessary power converters are expensive, meaning that HVDC only makes sense to bridge distances of at least 100 kilometres.

Almost all superconductors can be built as underground cables. They can transmit significantly more power than HVDC lines, and thus take up less space without making compromises in terms of power. They owe their unique conductivity to extremely low temperatures. Depending on their design, they have to be cooled down to -253 degrees Celsius, a feat which is much less challenging below ground than high above the trees.Thus far, however, there are no plans to install superconductors even though the technology seems to be on the verge of reaching market maturity. RWE is considered to be one of the leading global superconductor providers of the future what with its pilot project at its headquarters in Essen.

In the next episode of the ‘Grid Expansion’ series, we will lift the veil on this pilot project and fast forward to the future to see which innovations could be driving grid expansion in coming years.

Part III of the series: "Everyone having (to have) their say takes time" Read more