It is imperative that greenhouse gas emissions be massively reduced worldwide in order to curb global warming. This calls for radical restructuring across all sectors of the economy. Power-to-X technologies are considered to be an important solution in this regard. They convert electricity from renewable energy into hydrogen, methane or liquid fuels which are then used to drive climate-neutral vehicles. This green electricity could also replace the fossil fuels used in relation to heat supply. This series presents the mechanisms of and potentials for these technologies. First, an overview.

The people of Europe very much still have petrol on the brain: more and more cars are being driven on the continent – over 8 million in the Netherlands and in excess of 31 million in the UK – a figure that is trending upwards. Although the number of fuel-guzzling SUVs and vans in the automobile fleet is increasing, the proportion of electric and hybrid models is practically non-existent. Not to mention lorry traffic, which is also on the rise – not least due to an increasing number of orders being placed via the internet.

The transport industry is deeply dependent on petrol, heavy fuel oil and kerosene and this is likely to remain unchanged for many years to come. The hunt for climate-friendly alternatives is on. One solution could be to use chemical processes to convert electricity into gas or liquid fuels, which are referred to as e-fuels. These can then be used to power cars, trucks and container ships. Electricity could replace fossil fuels not only in the transport industry, but also for heating and industrial purposes. The term ‘Power-to-X’ encompasses  all processes which convert electricity, i.e. power, into other energy sources, X.

Innovations are necessary, considering the energy transition has thus far primarily been an electrical one. While the proportion of electricity from renewable sources has been growing for years (currently around 38 percent), the importance of renewable energy in other sectors is negligible. In the transport sector, the proportion of green energy consumed ground to a halt at around five percent and has not budged in years. Recently in the heating sector, the share of green energy even fell to around 13 percent. In order for Germany to hit its climate targets, these sectors will need to play catch-up. According to the German government’s climate protection plan, around 40 percent of greenhouse gas emissions from transport are to be cut by 2030 compared with 1990 levels. In actual fact, emissions are on the rise.

It is therefore not surprising that the consulting firm Frontier Economics has issued a call for urgent action in a report (German only) commissioned by the energy supplier innogy: “The long-term goals for 2050 state that the energy, transport and building sectors must become almost climate-neutral,” the study finds. “Thus, there will need to also be a heating transition and a transportation transition at the very least, in addition to an energy transition in the electricity sector, moving forward.”

Gas, petrol and heat from electricity

Surplus electricity from renewable energy is used in the heating, transport and industrial sectors, all of which are currently still dominated by fossil fuels. Climate-neutral electricity not only reduces emissions in these sectors, it also presents advantages for the electricity industry. The increasingly volatile and rurally generated energy can be stored on a larger scale and applied in a variety of ways.

How to use renewable power for the transport and heat sector

This brings us to the topic of sector coupling. No energy conference can go without referring to this buzzword and ever more studies are investigating its potential and benefits.

Sector coupling makes a distinction between direct and indirect electrification. With the former, electricity is used directly, for example to drive electric cars or heat pumps. So far, however, the spread of electricity-based applications in the heating and transport sectors has been very limited. Research is therefore increasingly being carried out to determine processes which first convert electricity into other energy sources before using it later on. These other energy sources can be liquid or gaseous fuels, heat, cold or chemicals. As part of this series, we will look at the following sector coupling technologies: Power-to-Gas, Power-to-Liquid, and Power-to-Heat.

The number of technical processes covered in this manner is endless. Some have been on the radar for some time, having been tried and tested, such as the conversion of electricity into hydrogen by electrolysis. Others are still at various stages of the testing process. Yet they all have one thing in common. Every form of sector coupling needs an energy storage solution – whether by way of tanks for fuels, gas caverns or heat storage units – and various infrastructure designs.

Conversion technologies: Schematic figure of the coupled sectors and their interconnected "Power-to-X" technologies 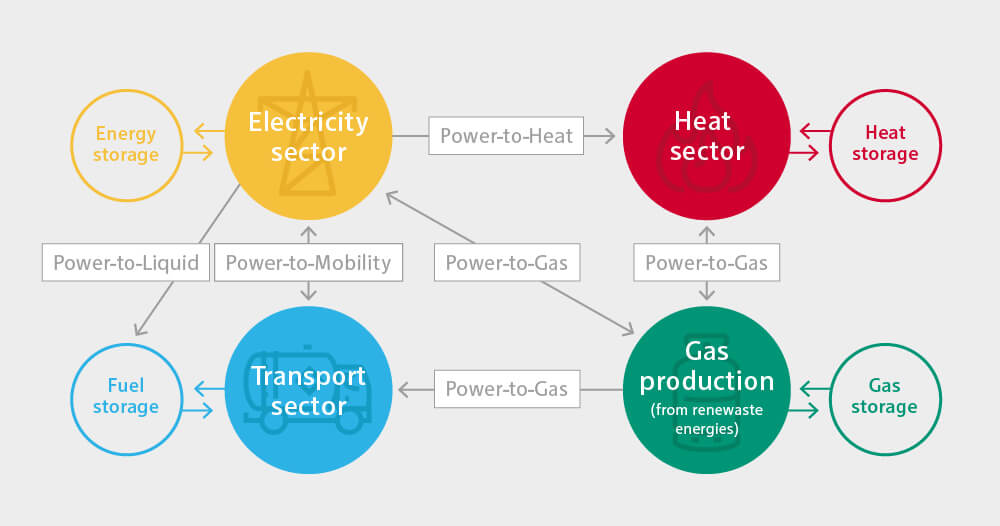 Conversion technologies: Schematic figure of the coupled sectors and their interconnected "Power-to-X" technologies

Synthetic fuels for ships and aircraft

Power-to-X makes decarbonization across all sectors possible, says engineer Michael Sterner in a report. The professor for energy storage and energy economics at Regensburg Technical University in eastern Bavaria acts as an advisor to numerous committees and is regarded as one of the co-creators of Power-to-X technology.

The concept, Sterner advertises, offers various ways in which to convert wind and solar energy into energy sources that could be stored, transported and widely used within the existing infrastructure. He cites gas, heat and mineral oil as examples. According to Sterner, this would be good for security of supply in Germany because it would make the energy supply more robust and stable overall.

The study titled ‘Developing an Integrated Energy System’, on which around one hundred experts from the Leopoldina, Acatech and Akademienunion science academies worked, paints a similar picture. The science academies attest that e-fuels, i.e. synthetic fuels and combustibles, are becoming increasingly important for energy supply: “They are easy to store and can be used, for example, in shipping and air traffic, where purely electrical solutions are difficult or impossible to implement.”

So much potential but still not marketable

In light of the stipulated expansion of renewable energy, many studies see great potential for Power-to-X technology. Apart from a few exceptions, however, there are currently only few marketable options. The issue is that the required technologies are “still in the early stages of development,” write the authors of Frontier Economics. Efficiency levels are still too low and investment costs are simply too high. However, the authors of the study expect significant learning outcomes and effects resulting from economies of scale if these technologies were to be applied widely.

But this also means that no one knows which technology is likely to prevail and how reception will progress. Will it be synthetic methane that is produced in large quantities and then fed into the gas grid? Will it be trucks and container ships that run on hydrogen or liquid gas in the future? Will we really heat more with electricity? This means that sector coupling must ultimately be designed to be technology-neutral.

Demands for emissions trading for all sectors

Another issue is that the use of electricity within Power-to-X systems is treated the same as for any end consumer. In other words, operators have to pay all taxes, charges and levies on the electricity price – even though the electricity is first converted into other energy sources and actually consumed at a later time. The experts from Frontier Economics therefore suggest that the conversion and storage of electricity be seen as part of the energy value chain and exempt from the relevant levies, taxes and charges.

“In order for sector coupling to come into its own, the electricity, heat and transport markets must offer equal conditions for all energy sources,” write the scientists of the Leopoldina, Acatech and Akademienunion academies, proposing that European emissions trade be extended to all sectors and that a minimum price be set.” So far, this is only the case for power generation and industry purposes.

The German government’s Monopolies Commission is calling for a uniform energy tax based on CO2 emissions. “This would make the use of electricity in the transport and heat generation sectors cheaper compared to fossil fuels,” she writes in her special report entitled Energy 2017. “The incentives for sector coupling would increase.”

In the ‘Power-to-X’ series, en:former presents sector coupling technologies which convert electricity into other energy sources. In the coming weeks, the series will explain how Power-to-Gas, Power-to-Liquid and Power-to-Heat really work and will shed a light on their applications and relevant market potential.

Part II of the series: "When wind warms in the winter" (Power-to-Gas) Read more
More about the topic "sector coupling" Read more