Following approval by the Irish parliament on March 23 of a landmark Climate Bill, the government published the Maritime Area Planning Bill (MAP) and launched the National Marine Planning Framework on July 1, putting the country on a path to net zero carbon emissions by 2050, a journey in which offshore wind is set to play a central role. Ireland is blessed not just with rainfall and fertile land, but a large wind resource, owing to its location on the north western edge of Europe.

It has been quick to take advantage. The country had 4.235 GW of onshore wind capacity in 2020, supplying about 30% of the country’s electricity supply, one of the highest proportions of wind generation anywhere in the world. However, that appears to be only the start of an even more exciting journey.

Ireland is heavily dependent on energy imports, but has yet to exploit the strong winds blowing off its coasts, having built only 25.2 MW of offshore wind to date. Yet, according to the Sustainable Energy Authority of Ireland’s (SEAI) Wind Energy Roadmap, Ireland could have 30 GW of offshore wind by 2050, double its target for onshore wind, which is 11-16 GW. The SEAI believes that by 2030 offshore wind alone could supply more electricity than the country needs and there is every reason to think so.

The UK, for example, saw offshore wind generation last year of 31.9 TWh from around 12 GW of capacity. Ireland’s total electricity generation in 2019 was 30.7 TWh. On that basis, SEAI’s estimates suggest Ireland could generate almost three times its current electricity needs from offshore wind, and more than four times its requirements, if onshore wind is included.

This would result in a complete transformation of the country’s energy system, a future portrayed in a study released in March by the MaREI research centre. This sees power generation increasing four-fold by 2050, renewable energy capacity rising five-fold and the country’s dependence on imported fuels falling from 70% today to just 5% as the country becomes a net energy exporter for the first time in its history.

The target set in the Climate Action Plan 2019 was a minimum of 3.5 GW of offshore wind by 2030, but the government adopted a new target of 5 GW in its Programme for Government, published on October 29, 2020.  This would be popular. In May 2020, a survey conducted by MaREI showed overwhelming public support — 93% — for offshore wind farms in Irish waters.

Momentum in the sector is picking up. The government last year designated seven offshore wind projects as ‘Relevant Projects’ – effectively a fast track process, which will allow them to apply for construction under the MAP. MAP seeks to create a single state consent regime for Ireland’s entire maritime area and provides for offshore wind developers to apply for a single offshore environmental impact assessment.

Two of the leading projects are being developed by RWE Renewables, along with Irish partner Saorgus Energy Ltd. The two wind farms, Bray Offshore Wind and Kish Offshore Wind, make up the Dublin Array Offshore Wind Farm Project, which will have capacity of between 600 MW to 900 MW. The project will amount to an investment of over $1 billion and take advantage of shallow waters of between 2 to 30 metres about 10 kilometres offshore.

The first of three auctions with ring-fenced capacity for offshore wind is expected this year. Successful bidders will receive a contract for difference, providing revenue certainty for about 15 years.

So far, Ireland has installed only a few wind turbines off its coasts. According to SEAI estimates, however, the Republic of Ireland could generate more than its own electricity needs from offshore wind power in the future.
Image credit: © Arnieby, shutterstock 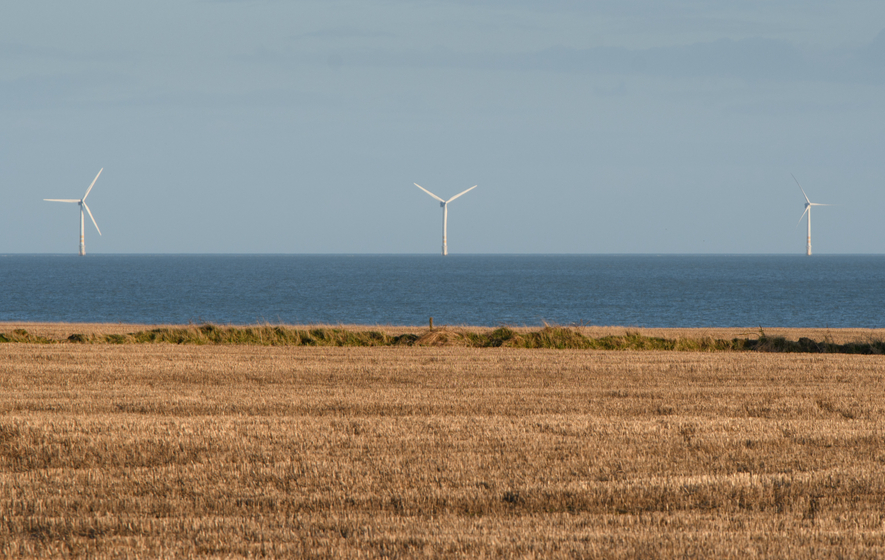 So far, Ireland has installed only a few wind turbines off its coasts. According to SEAI estimates, however, the Republic of Ireland could generate more than its own electricity needs from offshore wind power in the future.
Image credit: © Arnieby, shutterstock

However, Ireland’s offshore wind potential is so large that it raises other issues — how this huge resource can be integrated into the country’s electricity grid, and whether Ireland could bring this clean, sustainable energy to other European shores.

As a result, the Irish Department of the Environment, Climate and Communications (DECC) and Irish transmission system operator EirGrid have consulted on how the country’s electricity grid should be developed. EirGrid says 1.5 GW of offshore wind could be built on the Irish East Coast without significant transmission capacity expansion, but the 5 GW target will need additional onshore grid reinforcements.

In May, the government published a framework for the country’s offshore electricity transmission system designed to facilitate large-scale growth in renewable energy capacity. This policy takes a phased approach in which offshore wind developers will be responsible for transmission interconnections in the first sheduled round of auctions for new offshore wind capacity, with Eirgrid taking over responsibility by round three.

Reaching out to continental Europe

Other grid developments offer even more potential. The island of Ireland already has two 500 MW, high voltage, direct current interconnectors with the UK, the East-West interconnector, which takes electricity to and from Ireland and Wales, and the Moyle interconnector, which connects Northern Ireland with Scotland. The UK has even larger onward transmission capacity to other European countries on its eastern coast.

A new interconnector, called Greenlink, is under development. Natural Resources Wales approved the project’s application for a marine license in March, and two planning consents were granted by local UK authorities last year. The link is expected to be operational in 2023 and will add another 500 MW of export/import capacity between the UK and Irish electricity markets. Another project, the 700 MW Celtic interconnector, is also under development and has received EU funding as an EU Project of Common Interest. This would bring electricity from Ireland to France for the first time via a 500 kilometre subsea wire. Eirgrid is expected to apply for planning permission this summer.

With both projects under way, Ireland’s export capacity, for the whole island, would reach 2.2 GW, providing not only a significant basis for the expansion of offshore wind, but providing system flexibility to deal with the resource’s variability, and potentially a new source of revenue for the Irish economy from clean energy exports to the larger economies of northern Europe.

Stabilizing the grid: 423 battery racks in 47 overseas containers can store up to 117 megawatts of electricity
Read more
More about Security of supply Power generation Energy policy