Wind power is in a constant state of learning and development. New challenges are emerging, and the sector is cross-fertilising with other areas of technological advance, such as digitalisation and automation, to improve its own activities. The principal aims are to reduce costs and the environmental footprint of wind farm construction and operation.

A report published in the journal Nature Energy in April showed that experts working in the wind sector are confident costs will continue to fall. The report revisited a survey of opinions carried out in 2015 and shows that expectations then have already been exceeded. Moreover, a new survey conducted in 2020 predicts that wind power costs will fall by 37-49% by 2050.

And it won’t just be bigger turbines that deliver this result. In fact, larger turbines present new engineering challenges as they have outgrown the lifting capacities of older installation vessels. RWE Renewables, for example, plans to use 14 MW turbines on its 1.6 GW Sofia wind farm project off the UK’s east coast, an almost fourfold leap from the 3.6 MW turbines the company installed on the Gwynt y Môr wind farm in 2015.

New ideas are coming forward to address the heavy lift challenge. The Jan De Nul Group is building a new generation of floating installation crane vessels, the largest of which, Les Alizés, boasts a 5,000 metric ton Huismann crane fixed on a floating hull, rather than using a jack-up design. It will be able to operate in deep waters and install the largest wind turbines, which will sit on foundations weighing up to 2,500 tons.

Meanwhile, Norwegian company Nekkar has been rethinking the whole question of heavy lift, using its experience from the oil and gas industry. The company is developing a new automated system which uses ‘active heave compensation’, a method of adjusting to wave motion when lifting heavy objects offshore.

Its SkyWalker device, which is much smaller than existing cranes, will lift heavier objects higher than a mobile crane. This should allow quicker installation times and open up new terrains onshore to wind development. Later models are expected for both fixed-bottom offshore wind foundations and floating wind farm concepts. Innovation Norway has awarded the company and its partners NOK21 million ($2.5 million, €2.1 million) to help develop the system. 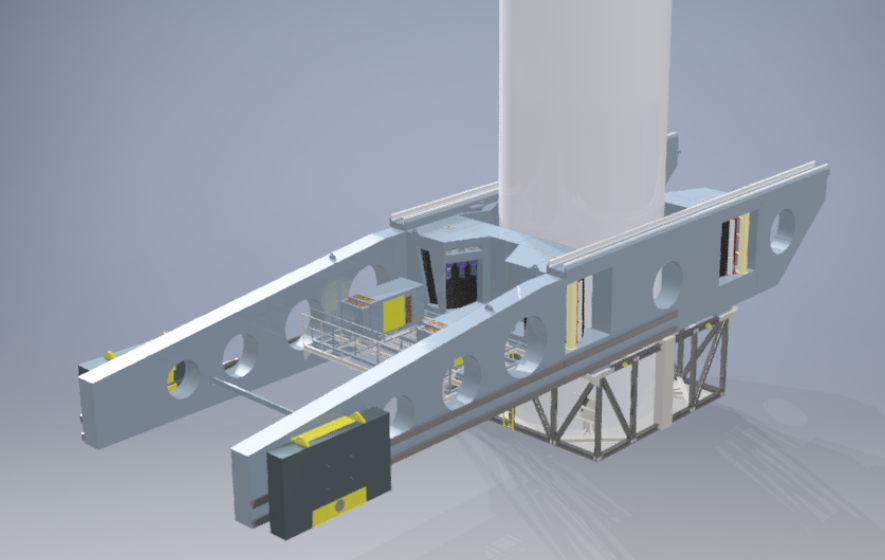 Installation is only one area of innovation. Offshore wind farms require a host of survey and inspection data. To meet this demand, UK company HydroSurv is developing a new generation of vessels. In March, the company launched two ‘autonomous surface vessels’, which are expected to reduce the cost of offshore surveys and inspections significantly. As they do not carry crew, they are small and light, which means they consume less energy in carrying out their operations, reducing the environmental footprint of survey and inspection activities. The vessels carry different types of sensors which capture data, as well as ‘task-orientated’ payloads designed to carry out specific functions.

Automation is also being applied to maintenance and inspection, which has a big bearing on cost. The less downtime a wind turbine experiences, the more clean electricity it can generate and the lower the average cost of generation. However, maintenance offshore is hazardous and expensive. To address these issues drones and robots are being developed which allow engineers to decide remotely if some form of intervention is necessary. Falco Drone Technologies expects to test a new prototype this summer, which will extend drone flying ranges and allow operation even in high wind speeds by mimicking bird flight.

Other companies, for example in the US, where drones are now regularly used for inspections onshore, hope to apply their technologies offshore. Aerodyne Measure has equipped its drones with LiDAR (light detection ranging) sensors, which help them maintain position so that accurate pictures of the blade surface can be captured, even in windy conditions.

While the wind tower and turbine may be the icon of the wind industry, wind farms also require electrical infrastructure to connect to the grid and here too innovation is in full swing. The Dogger Bank wind farm, which is to be built 130 kilometres off the UK’s east coast, will be the first to use a 1.2 GW unmanned High Voltage Direct Current (HVDC) offshore substation. HVDC is an efficient solution when it comes to transmitting electricity over long distances. The platform will be built by offshore engineering company Aibel and will be 70% lighter per MW of capacity than manned platforms. The weight reduction comes from not having to install living quarters, a helideck and accommodation systems, and the savings in terms of steel and concrete translate into both cost reductions and a lower environmental footprint.

All in all, with the help of innovation funds, companies are looking at every aspect of wind power from the foundations to the turbine, to O&M and electricity transmission to find better, cheaper ways of bringing clean power to European grids. It is this constant improvement and innovation which is likely to make the experts forecast of a 37-50% reduction in costs by 2050 a reality.