It took almost 20 years to build the first 5 gigawatts (GW) of wind power capacity in the UK. Total capacity now exceeds 20 GW and the last 5 GW were built in the last two years alone. This is just one example of the rapid pace at which the UK’s energy sector is transitioning. Several coal-fired power plants have been closed meaning the British energy sector is going through a period of enormous upheaval.

For the first time, renewables have surpassed fossil fuels in terms of installed capacity in the UK. A success which, according to experts, would have been unthinkable just a few years ago. A study by the Imperial College London on behalf of the energy generator Drax looks at the reasons behind this change. The capacity of wind, solar, biomass and hydro power has tripled in the past five years, at the same time one third of the installed capacity of coal, gas and oil-fired power plants has been taken off the grid. Mostly because the stations were no longer profitable or had reached the end of their service lives.

This means that the power generation capacity of renewables (41.9 GW) exceeded that of coal, gas and oil combined (41.2 GW), between July and September. “Britain’s power system is slowly but surely walking away from fossil fuels, and this quarter saw a major milestone on the journey.” says Iain Staffell, energy expert at The Imperial College London and one of the authors of the study. 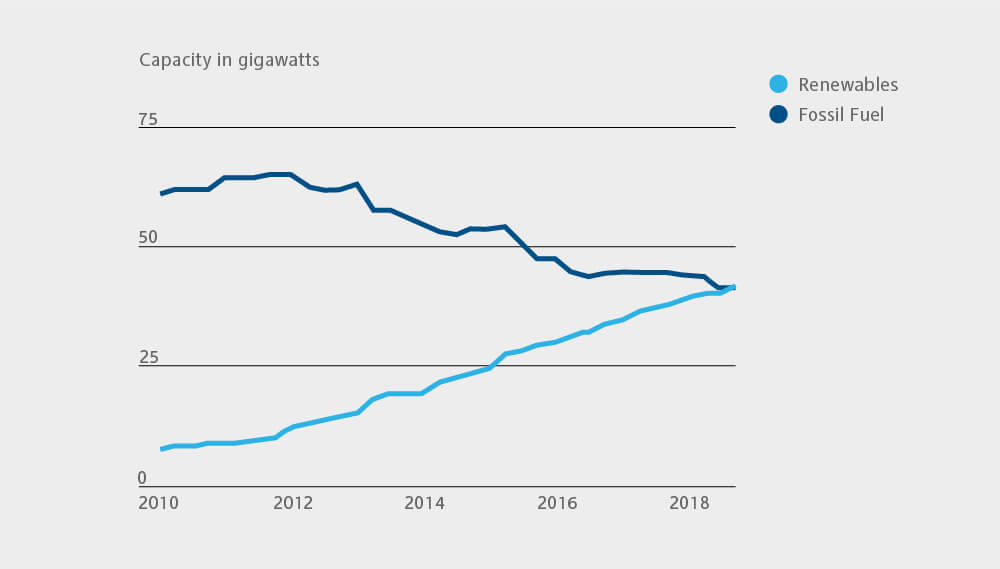 Wind power is the leader, when it comes to renewables, with over 20 GW in capacity, followed by solar with 13 GW and biomass with 3 GW. While the expansion of solar energy has slowed, recent times have seen heavy investments in wind turbines. As a result, the UK boasts the largest offshore capacity and the largest offshore wind farm in the world.

Nevertheless, power production continues to be dominated by fossil fuels, primarily gas, which accounted for 38 percent of the electricity mix in the third quarter of 2018. As a comparison, the share attributed to renewable energy rose to 28 percent. Coal, on the other hand, plays only a minor role in the UK’s electricity supply (just under 3 percent).

Wind turbine ultrasound emissions not high enough to cause damage

RWE expands its renewables business in the Netherlands