World premiere in Eemshaven: RWE builds the first wind turbines on a sea dike dam.
The Oostpolderdijk Wind Farm in the Dutch province of Groningen will consist of three turbines. This is the first time that such a project has been undertaken. Due to limited space at the site of the dike a climbing crane is being used to install the top turbine components. So far, the foundations and the lowest turbine components of the wind turbines have already been built. One wind turbine has been fully completed, and the climbing crane has begun the further construction of the second wind turbine.

In recent years, RWE and Water Board Noorderzijlvest (the owner of the sea dike dam) have conducted meticulous research into the construction process and dike safety, as well as the impact of the project on the local environment. This has resulted in a highly specialized technical design which is now being implemented. The most important aspect of the design has been to guarantee the safety of the dike and its dam function. Wind Farm Oostpolderdijk, with a total installed capacity of 7.5 MW, is expected to be operational by the end of 2021.

We are proud to be building Oostpolderdijk Wind Farm as the first of its kind worldwide with wind turbines on a sea dike dam. We are committed to bringing innovations forward like this, in order to further broaden and expand the opportunities in the field of sustainable electricity production. By combining knowledge, innovation and determination, we have added a new function to a sea dike dam in the Netherlands. The experience we gain from this project will be market leading, and will potentially open up further opportunities to build wind farms on dikes in other locations too. And of course: Safety and the integrity of the dike are our top priority. Katja Wünschel, COO Wind Onshore & PV Europa & asiatisch-pazifischer Raum von RWE Renewables

In February, RWE concluded a power purchase agreement (PPA) with ASML, the world’s largest supplier of lithography systems for the semi-conductor industry, for the purchase of green power generated by Oostpolderdijk Wind Farm and other projects.

A special climbing crane helps to construct wind turbines due to limited space. 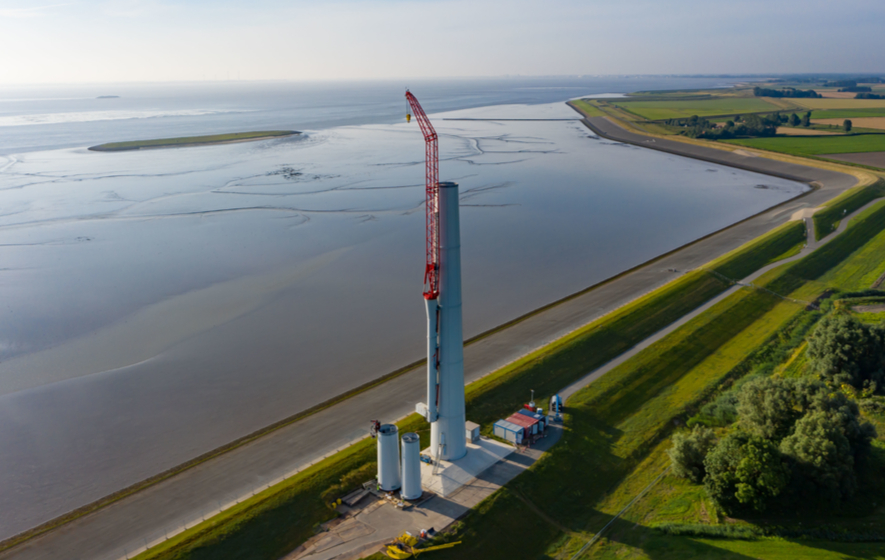 A special climbing crane helps to construct wind turbines due to limited space.

Sustainable production portfolio in the Netherlands

RWE is a globally leading player in the energy transition sector. The Netherlands is one of the strategic markets where the company wants to further expand its sustainable energy portfolio. RWE is currently operating seven onshore wind farms with a capacity of 268 MW (pro rata view) and two solar parks, in addition to its other business activities (gas, hard coal/biomass). Including Oostpolderdijk Wind Farm RWE is now constructing four new onshore wind farms in the Netherlands with a total capacity of 116 MW. Furthermore, RWE will add the first floating solar project to its sustainable portfolio, as well as a ground-mounted solar project. Both projects are part of Solar park Amer. In addition to this RWE is also working on the expansion of CO2-free flexible production capacity, as well as on the development of hydrogen projects, such as NortH2, FUREC and Eemshydrogen, to help to green the industry.

Stabilizing the grid: 423 battery racks in 47 overseas containers can store up to 117 megawatts of electricity
Read more
2023-01-16