An €8 million commitment by the government of Lower Saxony has brought RWE’s plans to set up a test electrolyser to generate green hydrogen in Lingen within reach. Olaf Lies, Minister for the Environment, Energy, Construction and Climate Protection for the State of Lower Saxony, handed over the funding documentation to Sopna Sury, Chief Operating Officer Hydrogen at RWE Generation SE. Sury advised at the same time that RWE intends to invest €30 million in the construction of the test electrolyser at the site of its Emsland gas-fired power station.

By 2030, RWE will have created two gigawatts of electrolyser capacity of its own in order to generate green hydrogen. The decision to invest in a trial facility here in Lingen points the way forward for us. With this facility we aim to gain operational experience with the industrial use of the two technologies that will account for several hundred megawatts in the context of GET H2, for example. The funding commitment by the Ministry of the Environment in Lower Saxony is a crucial contribution towards ensuring that this pilot project can be implemented and will pave the way for future large-scale facilities. Sopna Sury, COO Hydrogen RWE Generation

“Here in Lingen, we are witnessing a fascinating story about the future transformation of our energy production. RWE is not just demonstrating its commitment to Lingen as an energy location; with this pilot project the company is also taking the first steps towards the planned construction of large-scale electrolysis capacities here on site. Together, we are creating the basis for an entire electrolyser park that can and should be built here. The war in Ukraine shows us as never before that we need the energy transition – today rather than tomorrow. It now stands for more than just climate friendliness; it is becoming a symbol of peace and independence. Hydrogen will become an integral part of our energy system; we need it to achieve our climate goals. The energy transition can only succeed with molecules and electrons. RWE is making an important contribution to this project”, says Olaf Lies, Minister for the Environment, Energy, Building and Climate Protection of the State of Lower Saxony. 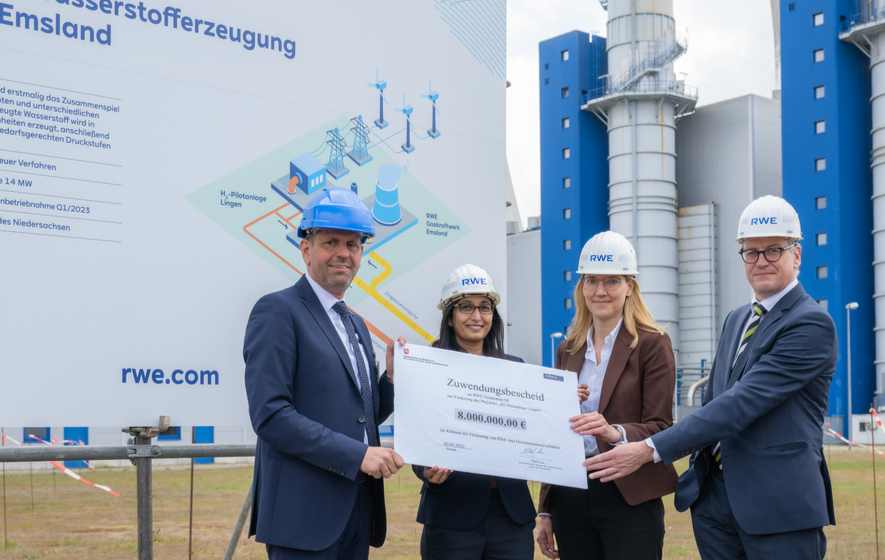 The pilot electrolyser will have an initial capacity of 14 megawatts (MW), making it one of the largest facilities of its kind in Germany from the outset. RWE aims to use the trial facility to test two electrolyser technologies under industrial conditions: Dresden manufacturer Sunfire will install a pressure-alkaline electrolyser with a capacity of 10 MW for RWE. In parallel, Linde, a leading global industrial gases and engineering company, will set up a 4 MW proton exchange membrane (PEM) electrolyser. RWE will own and operate the entire site in Lingen.

Following approval and the construction phase, the electrolyser facility will begin generating up to 290 kg of green hydrogen per hour from Spring 2023, using green electricity. The trial operating phase is initially planned for a three-year period, with an option for a further year.

The hydrogen generated will be fed into a public hydrogen network or be mixed with the fuel for gas turbines at the power plant. It could also be used to supply the hydrogen-capable gas turbine that RWE and Kawasaki plan to construct at Lingen by 2024.

The approval application for the pilot facility has been submitted. Assuming it gets the green light from the authorities, construction work will begin in June.

The Lingen location plays a key role in RWE’s hydrogen strategy: As part of the GET H2 project, the company plans to set up its first 100 MW electrolyser facility there by 2024. Its capacity will then be expanded to 300 MW by 2026. The objective of GET H2 is to work with partners to achieve the critical mass needed to get the construction of a national hydrogen infrastructure under way and develop a powerful European hydrogen market.

When it comes to hydrogen, RWE has all the possibilities under one roof: from green electricity production to expertise in producing and storing green hydrogen, and its Supply & Trading business that can make the fuel available to meet the needs of industrial customers. RWE is already working with high-powered partners on more than 30 hydrogen projects.

For an overview of the largest hydrogen projects RWE is involved in, click here Read more
Pilot project for green hydrogen at sea in the Netherlands Read more