Residing beneath the town of Etzel in Lower Saxony is one of Europe’s largest gas and oil cavern systems. A total of 75 caverns were leached into salt dome that is several million years old. The caverns have a maximum width of 70 metres and height of 500 metres – easily enough room to accommodate Manhattan’s Freedom Tower. The manmade storage facility has a capacity of up to eleven million cubic metres of crude oil and five billion cubic metres of natural gas, which can be delivered anywhere in Germany. In addition, the caverns house the Netherlands’ and Belgium’s strategic reserves.

Hydrogen instead of oil and gas

The mammoth subterranean cavities may be used to store renewable energy sources. Cavern operator STORAG ETZEL has joined forces with partners from business and science in the H2CAST-Ready research project to explore whether the underground system can be used as an industry-scale storage facility.

Illustration of the interior of a salt cavern 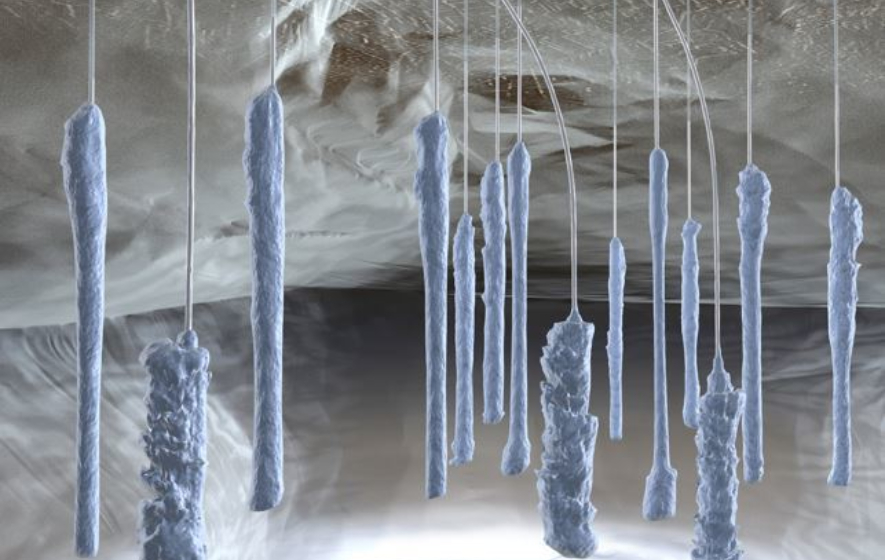 Illustration of the interior of a salt cavern

“We believe that we can repurpose the caverns by making a few process engineering adjustments,” says Marcel Sodmann, Head of Public Relations and Mine Surveying at STORAG ETZEL. “If we succeed, we can tap into enormous potential. The final expansion stage could culminate in 99 caverns, providing enough room to store 22.5 terawatt hours of hydrogen at the Etzel location.”

Just how important this would be for the German hydrogen economy (Link in German) is demonstrated by figures published by lobby group Gas Infrastructure Europe (GIE) which show that Germany has a storage potential of 40 terawatt hours (TWh). In a position paper (Link in German), the National Hydrogen Council also addresses the issue in detail. There would be enough space for more than half of the hydrogen reserves in Etzel, where about a quarter of Germany’s gas reserves are currently being stored.

Such storage capacities are indispensable if hydrogen is to make a significant contribution to the decarbonisation of energy consuming sectors. As generation of electricity from wind and solar farms for use in electrolysis fluctuates, it is impossible to strike a lasting balance between hydrogen production and consumption. Therefore, in the long run, we need caverns to buffer brief spikes and to store large amounts of hydrogen. This is the only way to stabilise the hydrogen grid, guarantee security of supply, and bridge disadvantageous weather such as cloud cover,” explains Marco Zobel, Group Leader at the Institute of Networked Energy Systems at the German Aerospace Centre (DLR), a partner in the H2CAST-Ready project. 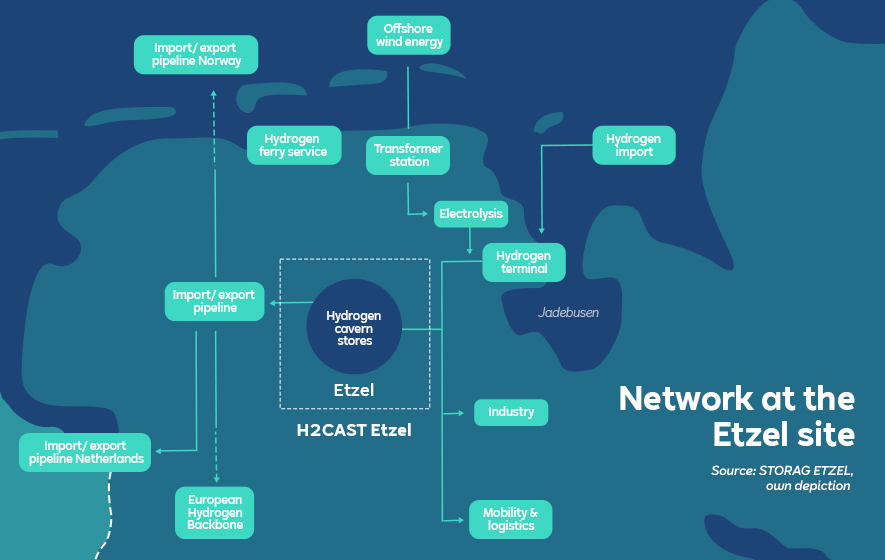 Zobel adds that Etzel is perfectly suited. Besides its unique geological attributes – salt caverns can only be built in a handful of regions – the location is extremely well connected. Says Marcel Sodmann, “We supply north-western Europe via a number of gas pipelines, which could be used to transport hydrogen in the future. Furthermore, we are close to the offshore wind farms in the North Sea as well as to the Wilhelmshaven and Varel industrial sites.”

However, this is still a vision, as the hydrogen market is only just gaining traction. “There are but a few regional grids and experimental platforms right now. We’re still miles from the branched transport and distribution network for which storage capacities of this order are required,” declares Marco Zobel. He says that this is precisely what needs to change. According to Germany’s Economics Ministry, demand for hydrogen in Germany could reach between 90 and 110 TWh as early as 2030. “This means we have to start preparing now and gain experience with the technology,” the DLR expert states emphatically.

‘Hydrogen backbone’ to connect the whole of Europe Read more

The project partners aim to continue using legacy infrastructure without any fundamental modifications to the underlying technology. As with gas, hydrogen is to find its way to Etzel via pipelines – or in the H2Cast-Ready project in tanks – after which it is forced into the caverns via a compressor. Then the gas can be fed into the pipelines for distribution on demand via a valve in the cavern head. 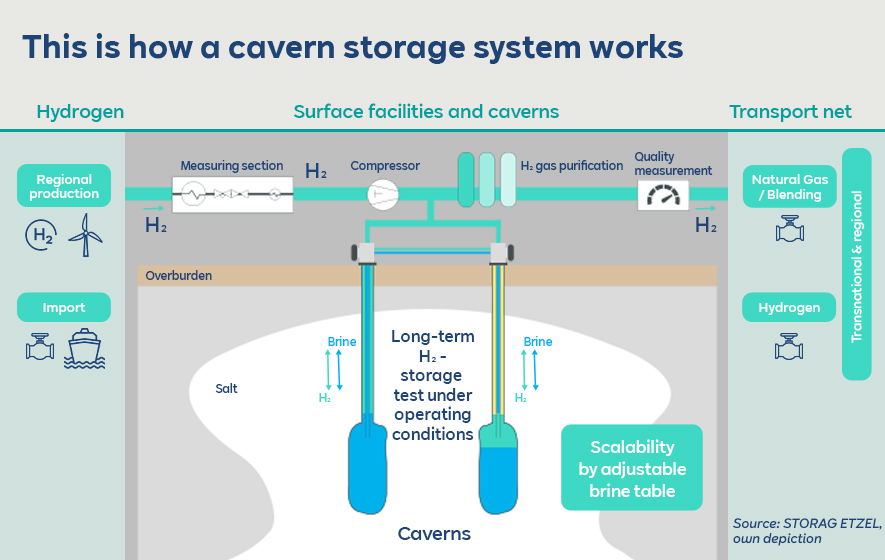 In addition to repurposing, the team at H2CAST intends to look into how to optimise the operational management of such storage facilities. After all, while gas plays a major role in heating buildings and demand varies significantly from one season to the next, hydrogen will probably be needed primarily by industry and demand will thus be spread evenly over the year.

Furthermore, the energy density of hydrogen is only a third that of gas, which means that the maximum amount of storable energy is smaller. Contrary to demand, however, production is much more volatile. “It is safe to assume that storage cycles will be much shorter and dynamic than for gas,” DLR expert Marco Zobel concludes.

Another unresolved matter is how storage will affect hydrogen quality, e.g. whether it will introduce impurities and the fuel will have to be processed for consumption. “What is unique to our undertaking is that we want to test everything and answer all these questions under real-life conditions, declares Marcel Sodmann. With this real-life laboratory, STORAG ETZEL intends to lay the cornerstone for becoming a component of the hydrogen start grid right away.

Similar projects are being pursued by other gas storage operators. For instance, RWE Gas Storage West plans to set up a hydrogen storage system in Gronau-Epe and thus make a major contribution to the GETH2 IPCEI project. As in Etzel, unstable hydrogen production is to be offset and needs-based uninterrupted supply to industry is to be ensured via the pipeline set up as part of the project.