In a guest article, Dr. Hans-Wilhelm Schiffer discusses the characteristics of forecasts and scenarios for the energy transition in various studies. In doing so, he critically classifies the approaches pursued by the institutions mentioned. Originally, the article appeared in 2021 under the title “Forecasts and scenarios for global energy supply as the basis for climate policy implications” in the magazine VGB PowerTech. This is the third part of the series of articles.

Increased electrification will play a key role in meeting the goal of limiting global tem­perature increases to 1.5 degrees Celsius. A comparison of several normative scenarios that follow this requirement shows that in­stitutions such as the International Energy Agency (IEA) or the International Renewa­ble Energy Agency (IRENA) as well as, for example, the companies BP and Bloomberg­NEF assume that global electricity genera­tion must double or even triple by 2050 compared to the level in 2020. 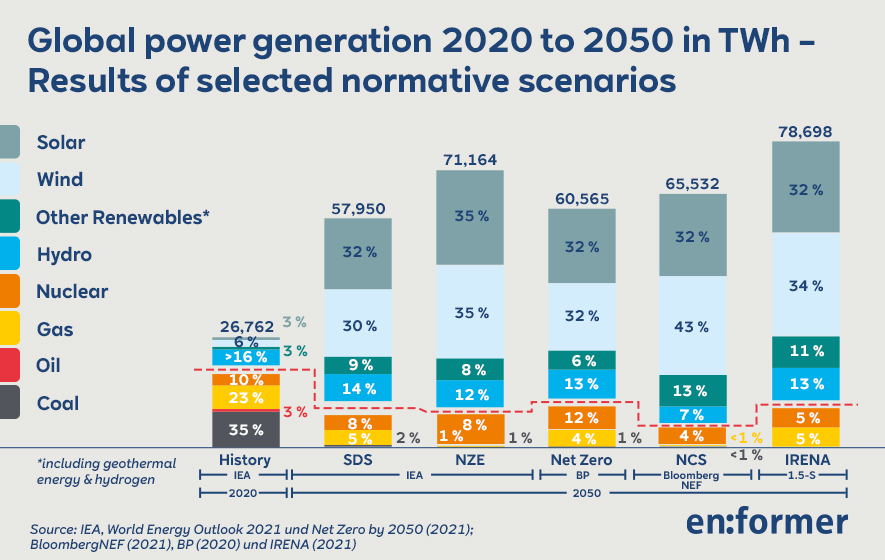 However, these renewable energies cannot keep up with the particularly dy­namic growth of wind power and solar en­ergy. Wind and solar alone account for around two thirds of electricity generation in the normative scenarios of the institu­tions mentioned in 2050.

As a reference, just 9 percent of global electricity generation was sourced from wind power and solar energy in 2020. In addition to renewable energies, nuclear energy and natural gas are also as­signed a significant role in global electricity supply. In contrast, the proportion of coal in the normative scenarios falls from the cur­rent 35 percent to 2 percent and less by 2050.

The key role of hydrogen

Alongside a strong growth in electricity demand, hydrogen plays a key role in the desired transformation of energy supply. More than 50 countries – including Germany – have enacted or planned hydrogen strategies. In a study presented in 2021, McKinsey identified hydrogen projects worldwide, a large proportion of which are in Europe.

In addition to strong growth in electricity demand, hydrogen plays a key role in the envisaged transformation of the energy sup­ply. More than 50 countries – including Ger­many – have enacted or planned hydrogen strategies. In a study presented in 2021, Mc­Kinsey identified 228 hydrogen projects worldwide, the majority of which are in Eu­rope. But other regions of the world also rely heavily on hydrogen. The project list is large across the globe, especially in Asia, North and South America, Australia, Africa and the Middle East.

If all planned and an­nounced projects are implemented, an in­vestment amount for hydrogen of around US $ 300 billion would be mobilized by 2030. Of this investment sum, more than US $ 80 billion is covered by projects that are already being implemented or are at a spe­cific planning stage. The de­velopment of a global market for hydrogen offers great opportunities for international cooperation, trade relationships and the es­tablishment of new value chains. 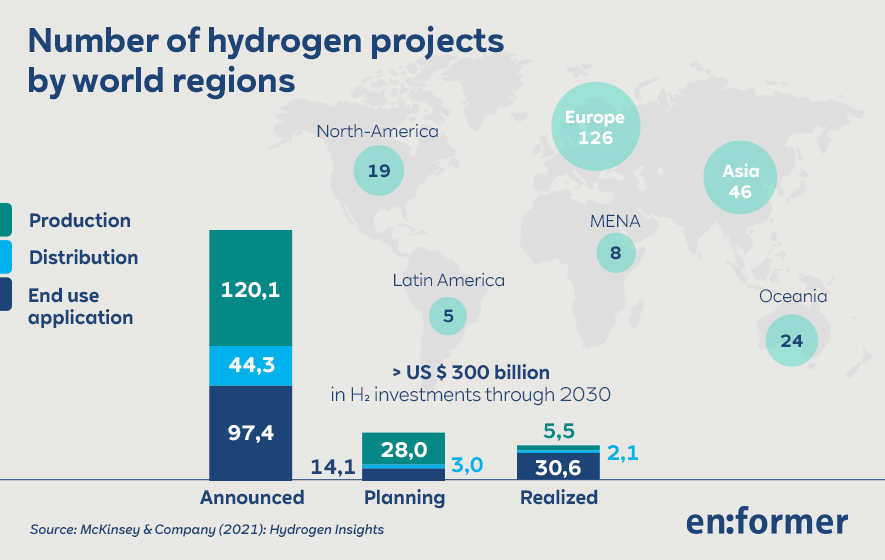 In Europe, the hydrogen that will be re­quired there in the future can only be gener­ated to a small extent, as sufficient potential that can be used cost-effectively is not avail­able. This also applies in a comparable way to countries like Japan or Korea. Increased international cooperation is therefore of paramount importance. Accordingly, bilat­eral and trilateral partnerships have al­ready been concluded or are in prospect.

One example in this context is the Hydrogen Energy Supply Chain (HESC) pilot project, in which hydrogen is to be produced in the Australian state of Vic­toria and transported to Japan by ship. The hydrogen will be obtained from lignite. It is planned to capture the resulting CO2 emis­sions and store them under the sea floor us­ing CCS technology in order to produce blue hydrogen.

Another intergovernmental pro­ject is HySupply. The aim of the German- Australian cooperation, which was founded in 2020 and will run for two years, is to identify and analyze possible business mod­els for the supply of green hydrogen be­tween the two industrialized countries.

At the regional level, the Important Project of Common European Interest (IPCEI) Hydro­gen was launched in December 2020, with which the market ramp-up for H2 technolo­gies within the EU is to be supported along the entire value and use chain.

22 EU mem­ber states as well Norway signed the Mani­festo for the development of a European “Hydrogen Technologies and Systems” val­ue chain. This confirms that the countries wish to promote joint hydrogen projects across Europe. Over 400 projects from 18 countries have now been registered within the EU. The start for the implementation phase was on May 28, 2021.

The 228 projects announced worldwide span the entire value chain – from produc­tion to infrastructure, transport and use of hydrogen. It is expected that in the longer term most of the hydrogen will be gener­ated by electrolysis using electricity from renewable energies. 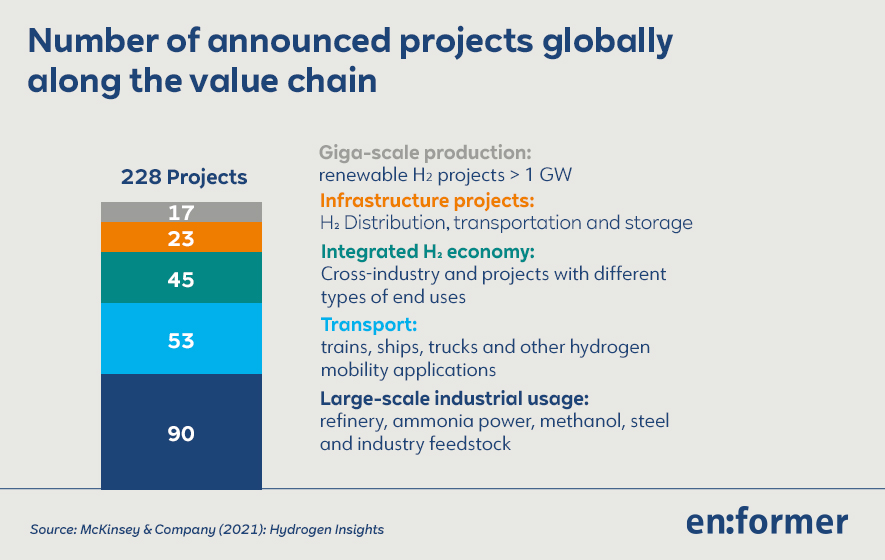 In addition, electricity from nuclear power plants opens up the possibility for CO2-free production of hy­drogen. Low-CO2 generation is also possi­ble on the basis of natural gas and coal, provided that the CO2 is captured in the production process and used or stored. Projects for the use of hydrogen are aimed in particular at the transport sector and in­dustry and there on areas that are difficult to electrify. Furthermore, hydrogen will play an important role as a storage medium in the future.

At the 26th Conference of the Parties (COP 26) of the United Nations Framework Con­vention on Climate Change (UNFCCC), which was held in Glasgow from October 31 to November 13, 2021, the Glasgow Climate Pact was unanimously adopted. The essen­tial elements of this agreement include:

In the aftermath of COP 26, the Interna­tional Energy Agency stated that in view of the more stringent climate protection obli­gations (updated pledges) presented by a number of countries at the conference, it can be assumed that the global tempera­ture rise can be limited to 1.8 degrees Cel­sius by 2050. However, this presupposes the full implementation of the commit­ments made.

At the same time, it becomes clear how am­bitious the goal set for 2030 is when you ex­amine it more closely. To date, China has only committed itself that the country’s greenhouse gas emissions will not increase after 2030 and that greenhouse gas neutral­ity should be achieved by 2060. If, however, China’s emissions, which in 2020 amounted to just under 12 billion tons of CO2 and thus corresponded to a good third of the global emissions burden, do not peak until 2030, the “rest of the world” in 2030 could at most emit up to 5 billion tons of CO2. That would correspond to a reduction of around three quarters within the next nine years.

The future of energy supply looks very dif­ferent from the past. This is shown by the projections and scenarios that have been presented by international organizations and global corporations in recent months. A change is taking place from an age marked by fossil fuels to an energy world where re­newable energies dominate.

The decisive keys for achieving the ambitious climate targets are the accelerated improvement of energy efficiency, the broad implementa­tion of the technology of capture and use or storage of CO2, the massive expansion of renewable energies to cover the rapidly growing demand for electricity and the reli­ance on hydrogen in the sectors that are dif­ficult to electrify. The pricing of CO2, if pos­sible implemented at a comparable level worldwide, technology-neutral funding mechanisms by governments and increased international cooperation are seen as cru­cial in order to achieve the sustainability goals. Above all, this includes the goal of limiting global temperature increases to well below 2 degrees Celsius.