In a guest article, Dr. Hans-Wilhelm Schiffer discusses the characteristics of forecasts and scenarios for the energy transition in various studies. In doing so, he critically classifies the approaches pursued by the institutions mentioned. Originally, the article appeared in 2021 under the title “Forecasts and scenarios for global energy supply as the basis for climate policy implications” in the magazine VGB PowerTech. This is the first part of the series of articles.

In order to be able to compare and to highlight similarities and differences, the respective underlying methodological approaches and the as­sumptions made are of particular rele­vance. This article outlines the characteris­tics of projections as well as exploratory and normative scenarios, and classifies the approaches pursued by the institutions mentioned.

The key messages conveyed in the studies are presented against the back­ground of developments over the past dec­ades. Increasing electrification and in­creased use of hydrogen are identified as decisive factors in achieving the pursued climate goals. Finally, it is assessed to what extent the reported results align with the Glasgow Climate Pact and what conse­quences result from it.

Development of the global energy supply from 1985 to 2020

A presentation of the results of the projections and scenarios, in which statements about the coming 30 years are made, shall be preceded by the essential characteristics of the global development of energy supply and demand in the period 1985 to 2020. First, the primary energy consumption. 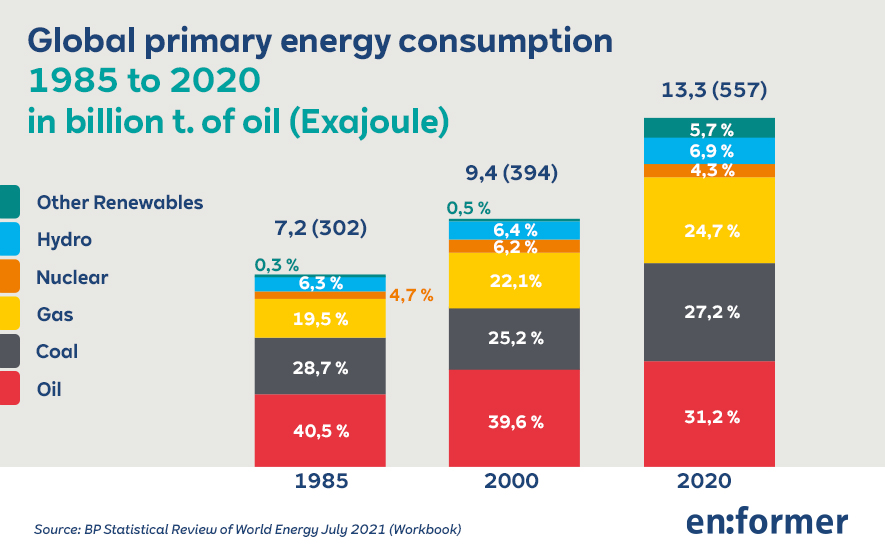 From 1985 to 2020, global energy con­sumption almost doubled. The main drivers of this development were a popula­tion increase by 60 percent and the increase in global economic output by 174 percent. The energy mix has changed within these 35 years:

Global electricity generation almost tripled between 1985 and 2020. Here, too, a comparable picture emerges with regard for the role of fossil fuels. 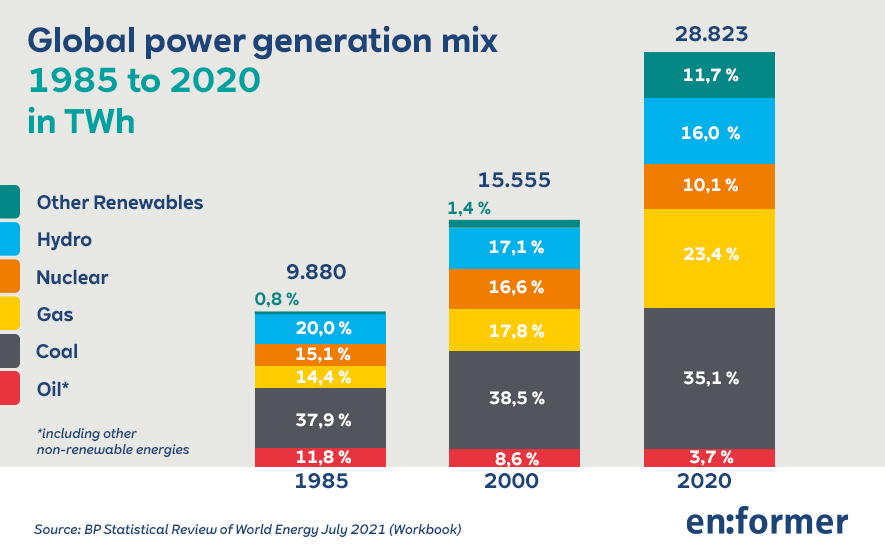 The growth in electricity generation was based largely on a significantly increased use of coal and natural gas.

The decades ahead will be fundamentally different from the development shown for the past.

Categorization of projections and scenarios

Basically, a distinction can be made between exploratory scenarios, projections and normative scenarios.

Exploratory scenarios are plausible, comprehensible, alternative views of the future that show conceivable results and help to understand how different factors can interact and thus shape the future. They address critical uncertainties, but also foreseeable trends and show the ef­fects of assumptions made about the fu­ture. They are not predictions. Probabili­ties of occurrence are not assigned to exploratory scenarios. The focus is on a narrative that is quantitatively under­pinned with model support. Exploratory scenarios provide a basis for a successful strategy and policy in a world marked by uncertainty.

Future developments are presented in projections rooted in parameters as­sumed to be likely, including the devel­opment of demographics, economic per­formance, technological innovations, world market prices for energy and ex­pected political frameworks. Projections therefore aim to depict the development that is believed to be probable in the sense of a forecast. The focus is on the model-based achievement of quantita­tive results.

Normative scenarios have a completely different character. The starting point is a clearly defined goal or set of goals for the future. From this starting point, a technically possible path is determined in order to achieve the desired goal un­der conditions that are as economically feasible as possible. For example, the goal may be to limit the rise in global temperature to a maximum of 1.5 de­grees Celsius compared to pre-industrial levels.

When comparing the results of different studies, it is therefore of crucial impor­tance which approach was followed in each case. The scenarios and projections presented by the institutions mentioned above in 2021 are assigned to the individu­al categories. 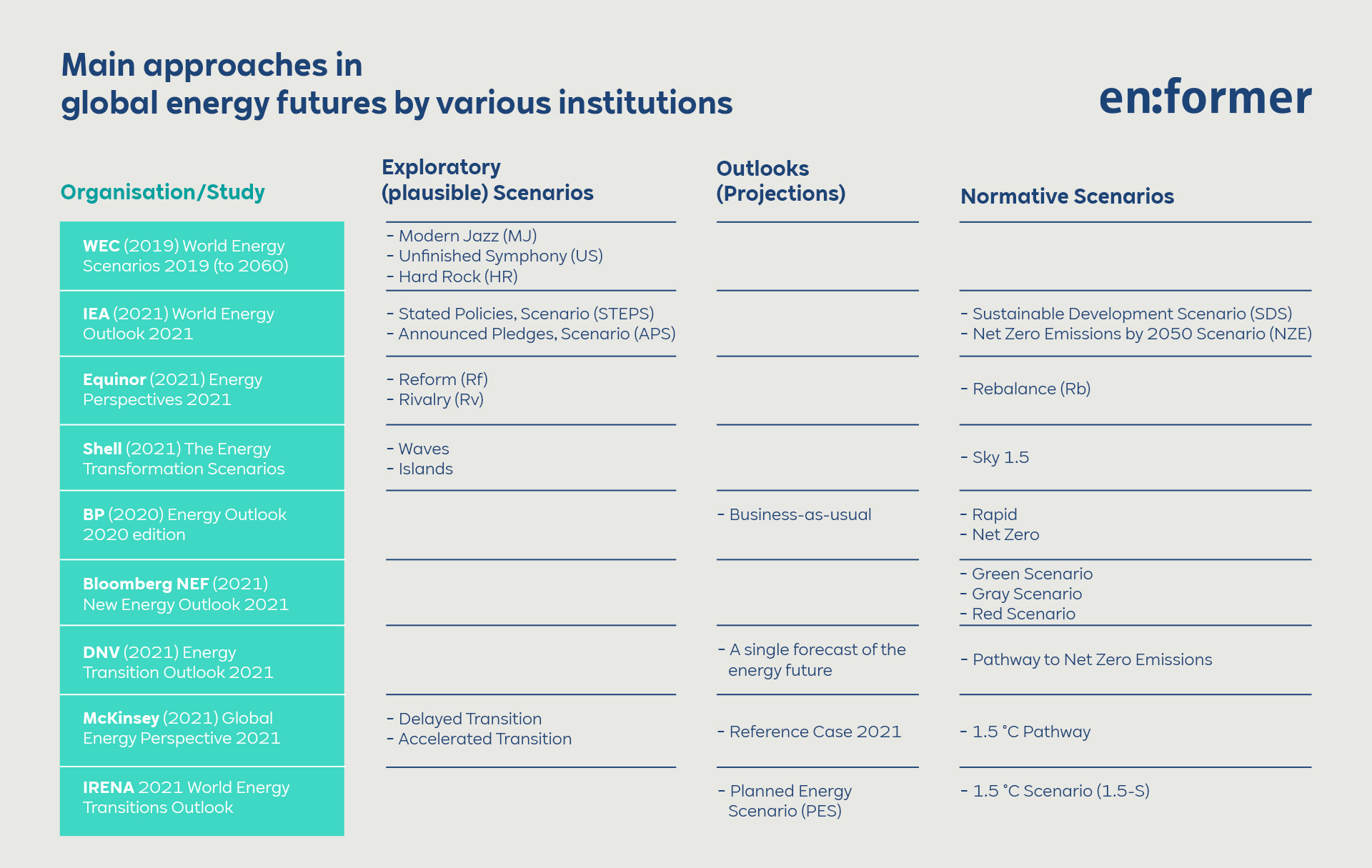 Results of different projections in comparison

Projections for global energy supply have been published in the last few months mainly by the Norwegian consulting and certification group DNV and McKinsey. The main results for the time horizon up to 2050 are as follows:

In contrast to the past, primary energy con­sumption will practically no longer in­crease in the future, but will – despite a further increase in the population and con­tinued growth in economic output – re­main at the current level. The energy consumption per capita of the popula­tion is therefore falling significantly.

A sec­ond statement – also deviating from the trends of the past – according to DNV: Fos­sil fuels are increasingly being replaced by renewable energies. The share of oil, natural gas and coal in primary energy consumption will decrease from current­ly more than 80 percent to 50 percent by 2050 .

The growth of renewable energies is main­ly generated by wind power and solar en­ergy. In contrast, hydropower, biomass and geothermal energy can only achieve limit­ed growth. Both DNV, and McKinsey, among others agree with this tendency.

Importance of fossil energies is decreasing

Still fossil energies will remain important in the future. However, their importance is clearly decreasing. This is especially true for coal. Global consumption of coal, which has risen sharply since 2000 due to the in­creasing use of this energy source, espe­cially in China, reached its peak in 2014 according to the assessment of most of the available studies. Peak oil demand is ex­pected towards the end of the 2020s.

The move away from fossil fuels to renewables is more notable in the electric­ity supply than is reflected in the figures for primary energy consumption.

In 2020, coal was the world’s most important ener­gy source for electricity generation with a share of 35 percent. This has not changed in 2021 either.

By the middle of the current decade, however, renewable energies are ousting coal from this position. Natural gas can continue to play its role as the second most important energy source for generat­ing electricity for the foreseeable future, alternating with coal, which will drop to third place in the 2030s.

Unlike in the transport sector and the heating market, oil does not play a significant role in power generation. The contribution of nuclear en­ergy to the generation of electricity re­mains constant at a global average of 10 percent. Among the renewable energies, wind and solar energy achieve by far the largest in­creases.

Hydrogen will have a key role

In addition to increased electrification, hy­drogen will play a key role in the upcoming transformation of the energy supply. For example, DNV predicts that global demand for hydrogen will increase six-fold by 2050 compared to today’s level. In industry in particular, hydrogen is increasingly be­ing used in order to implement the neces­sary decarbonization in the sector particu­larly in the chemistry and steel industries. In addition, increasing importance is at­tributed to hydrogen, especially in the are­as of the transport sector that are diffi­cult or impossible to electrify. These are aviation, shipping and heavy haulage.

Using natural gas or coal to produce hydrogen is only ad­vantageous from the point of view of cli­mate protection if the CO2 is captured in the process and used or stored (CCUS).

Depending on the energy source used, the hy­drogen is classified with different colors. The color gray stands for hydrogen, pro­duced from fossil fuels without the separa­tion and storage of CO2. Hydrogen based on natural gas with CCUS has the color blue. Hydrogen is considered green if the product was produced using electricity from renewable energies. While the gener­ation of hydrogen based on fossil fuels, in particular natural gas, dominates now, the expected increases are to be made available primarily through electricity from wind and solar systems.