Roughly 13,300 kilometres is the distance as the crow flies between Munich and Perth on the west coast of Australia. If Germany’s hydrogen grid were this long, it would be able to connect the country’s sprawling generation capacities, storage facilities, industrial sites and metropolitan areas come 2050. But even 5,100 km of pipelines would be enough to transport the fuel right across Germany by 2030. And according to the transmission system operators (FNB Gas), large swathes of the grid wouldn’t even have to be built from scratch.

Our most recent market surveys of transmission system operators uncovered a huge need for the rapid expansion of the hydrogen grid in Germany. Inga Posch, Managing Director FNB Gas

They have mapped out where existing gas lines could be converted and where new lines would need to be built to meet rising demand for hydrogen. “It should be comparatively cost effective to expand the hydrogen infrastructure using existing gas grids. Lines that today carry natural gas could tomorrow be used to carry hydrogen and other green gasses”, summarises Inga Posch, Managing Director at FNB Gas.

However, the necessary groundwork still needs to be laid: “First, we will need a solid, comprehensive legal framework as well as an integrated grid development plan. Then, transmission system operators can hit the ground running.”

An affordable backbone for the transport network

Ever since Germany’s national hydrogen strategy was passed in the summer of 2020, experts have agreed that demand for the fuel is likely to explode. The strategy presupposes a demand of 90 to 110 terawatt hours (TWh) by 2030, a large portion of which could be transmitted directly from generation sites to customers.

The advantage here versus transporting the fuel by road, rail or ship, is that natural gas pipelines can be converted relatively cost effectively, according to FNB Gas estimates. Plus, pipelines can be used to supply a continuous stream of hydrogen. It will still be necessary to iron out certain details, such as identifying the fittings and seals that need to be upgraded, for example. After all, hydrogen is transported at higher pressure than natural gas. However, experts agree that this conversion work would be notably more cost effective than building entirely new pipelines. And, following the most recent amendment to the German Energy Act, approvals and rights of way for pipelines can now be applied to hydrogen transport.

FNB Gas has based its calculations on reports such as that of the German Energy Agency, dena, and its own market surveys. In 2030, they anticipate demand will hit 71 TWh. According to the experts, industrial sites above all in the steel, chemical and refinery sectors will then need a pipeline connection. These companies tend to be based in North Rhine-Westphalia, Lower Saxony and Schleswig-Holstein as well as in Bavaria, Thuringia, Saxony and Saxony-Anhalt.

These regions also often boast cavern storage facilities, which could be used as intermediate storage sites for the fuel. This would make production less dependent on consumption, allowing it to respond more freely to renewable energy generation and prices on the wholesale market. 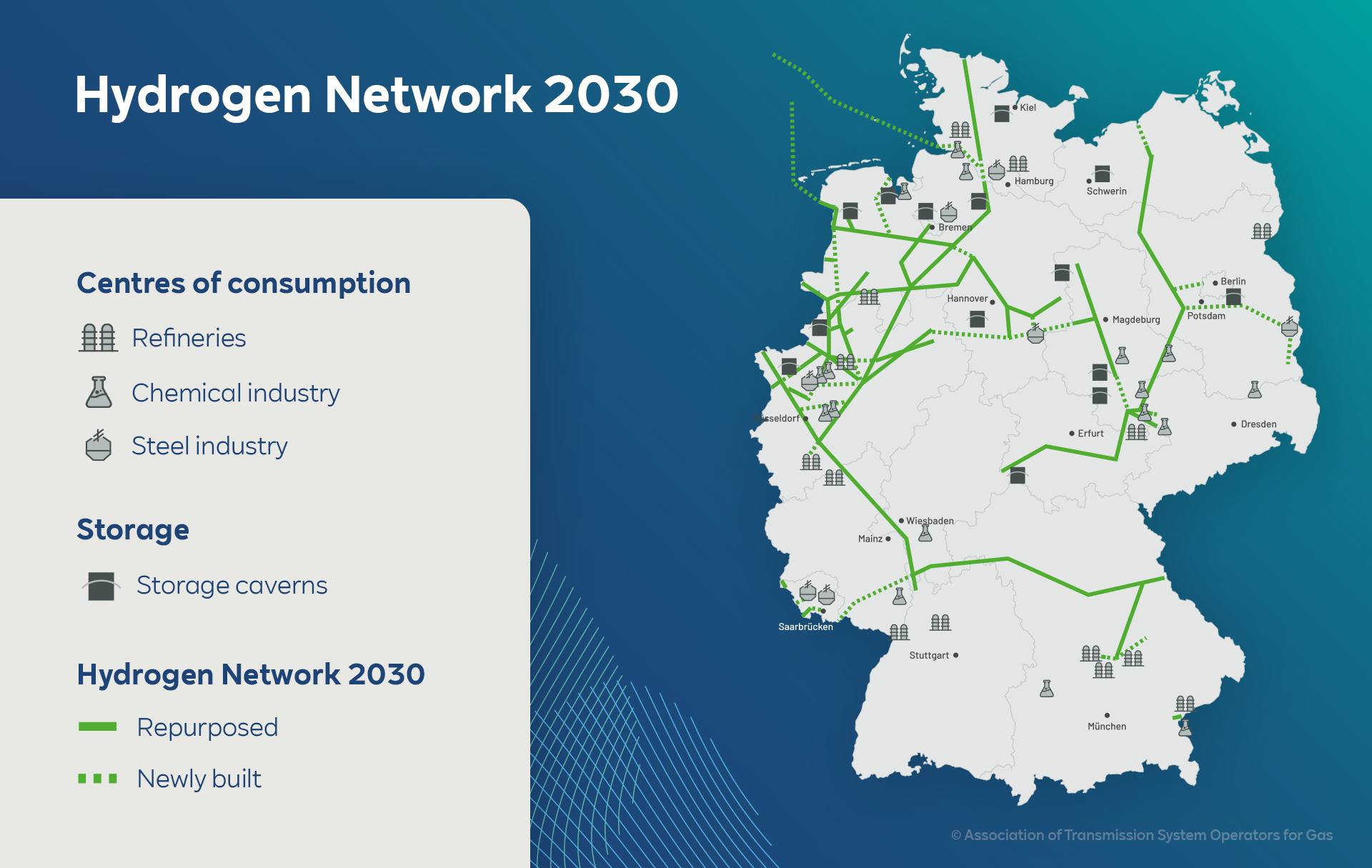 The necessary hydrogen volumes could be fed into the grid by electrolysers, connected to wind farms off the coast of Lower Saxony and Schleswig-Holstein. Furthermore, imports from Denmark, the Netherlands, Spain, Portugal and Norway could also be distributed via the German grid.

A total of 5,100 kilometres of pipelines would be needed to interconnect generation assets, storage facilities and end users. Roughly 3,700 kilometres could be covered using converted natural gas pipelines. This would translate into an initial investment of about six billion euros to cover the costs for converting existing lines and building new ones.

According to forecasts, come 2050, demand will not be limited to industry (340 of the 504 TWh forecast) as considerable demand will also be attributable to the transport (95 TWh, 89 of which via pipelines) and heating sectors (58 TWh). The transport network will then need to be denser – with pipelines needed along motorways for HGVs, for example. However, the experts have identified a possible solution: use 11,000 km of converted natural gas pipelines to cover a large chunk of the 13,300 km needed, which would require an investment of around 18 billion euros.

Inga Posch emphasises that the market surveys have uncovered a “huge” need for grid expansion. And she sees this as an opportunity: “Tackling the hydrogen economy head on and being committed and thorough in our grid conversion strategies today will give Germany a significant competitive advantage tomorrow.”

Lithium hydroxide could be produced for about 500,000 electric vehicles in Guben, Brandenburg
Read more
2022-05-10

Energy-related CO2 emissions rebound to a new high in 2021