In a guest article, Dr. Hans-Wilhelm Schiffer discusses the characteristics of forecasts and scenarios for the energy transition in various studies. In doing so, he critically classifies the approaches pursued by the institutions mentioned. Originally, the article appeared in 2021 under the title “Forecasts and scenarios for global energy supply as the basis for climate policy implications” in the magazine VGB PowerTech. This is the second part of the series of articles.

In October 2021, the International Energy Agency (IEA) presented the World Energy Outlook 2021 (WEO-2021). The publica­tion was to be understood as a clear signal to the UNFCCC Conference of the Parties (COP26), which was held in Glasgow in November 2021. In presenting this compre­hensive study, the following points were highlighted by the IEA:

When these points are addressed in poli­cies, the transformation to a globally sus­tainable energy supply should be acceler­ated. The existing challenge of achieving the Paris climate goals is illustrated using two exploratory and two normative sce­narios.

These four scenarios can be charac­terized as follows:

The Stated Policies Scenario (STEPS) takes into account the measures that have actually been put into effect or are at least being implemented in order to achieve announced energy and climate policy goals. One example is the Fit-for-55 Package, which was proposed by the European Commission in July 2021. It represents an exploratory approach to the future development of the energy supply, which will lead to a global tem­perature increase of 2.6 degrees Celsius by the year 2100 compared to the pre-industrial level.

The Announced Pledges Scenario (APS) takes into account all climate commit­ments made by governments worldwide, including the Nationally Determined Contributions (NDCs) and the longer-term Net Zero targets, and assumes that these will be met in full and on time. Ac­cording to this scenario, the global tem­perature increase remains limited to 2.1 degrees Celsius until 2100.

The Sustainable Development Scenario (SDS) follows an approach that puts the energy system on the right path to meet the most important sustainability goals. This includes everyone’s access to afford­able energy by 2030 and a drastic reduc­tion in pollution in the soil, water and air. With regards to climate-relevant gases, advanced economies will achieve net zero emissions by 2050, China by 2060 and all other countries by 2070 at the latest. For this normative scenario, a maximum global temperature increase of 1.7 degrees Celsius is determined in 2050.

The Net Zero Emissions by 2050 Scenario (NZE) is a normative scenario that shows a narrow but viable path for the global energy system to achieve net zero emis­sions by 2050, with advanced economies implementing this before others. This scenario also meets the requirements of the other energy-related UN goals men­tioned. In the NZE, the peak in the global temperature rise in 2050 will be 1.5 de­grees Celsius.

The results obtained for the various sce­narios differ greatly. The developments up to the year 2050 are outlined below.

In the Stated Policies Scenario (STEPS) there is a change in the energy supply sys­tem. Due to global population growth from 7.75 billion today to 9.7 billion in 2050 and an expected increase in economic output, especially in developing and emerging countries, global energy consumption may increase by 26 percent by 2050 compared to lev­els in 2020. The share of renewable ener­gies in global primary energy consumption will increase from 16 percent in 2020 to 28 percent in 2050. Nevertheless, fossil energies, i.e. coal, oil and natural gas, will still cover two thirds of global primary energy consump­tion in 2050 – compared to 79 percent in 2020. As in 2020, nuclear energy will then ac­count for 5 percent.

The capture and use or stor­age of CO2 (Carbon Capture and Usage / Storage – CCUS) makes only a very limited contribution to reducing CO2 emissions in this scenario. According to this scenario, the total CO2 emissions of 33.9 billion tonnes (billion t) in 2050 are just below 2020 with 34.2 billion t. As a consequence, global temperatures will rise by 2.6 de­grees Celsius by 2100 compared to pre-in­dustrial levels.

According to the Announced Pledges Sce­nario (APS), global CO2 emissions will drop by around 40 percent to 20.8 billion t in 2050. But this path is still associated with a temperature increase of 2.1 degrees Celsi­us by 2100. In contrast to STEPS, the global increase in primary energy consumption will remain limited to 14 percent by 2050. Re­newable energies have a share of almost 40 percent . The contribution of nuclear energy increases to 7 percent .

Fossil energies account for 53 percent , with significantly greater role being assumed for CCUS compared to the STEPS. The currently announced commitments, however, only cover less than 20 percent of the gap in emissions reduction that must be closed by 2030 in order to keep the 1.5 de­gree target within reach. Even if the com­mitments announced by mid-2021 are met, there remains a clear ambition gap to the Paris climate targets. 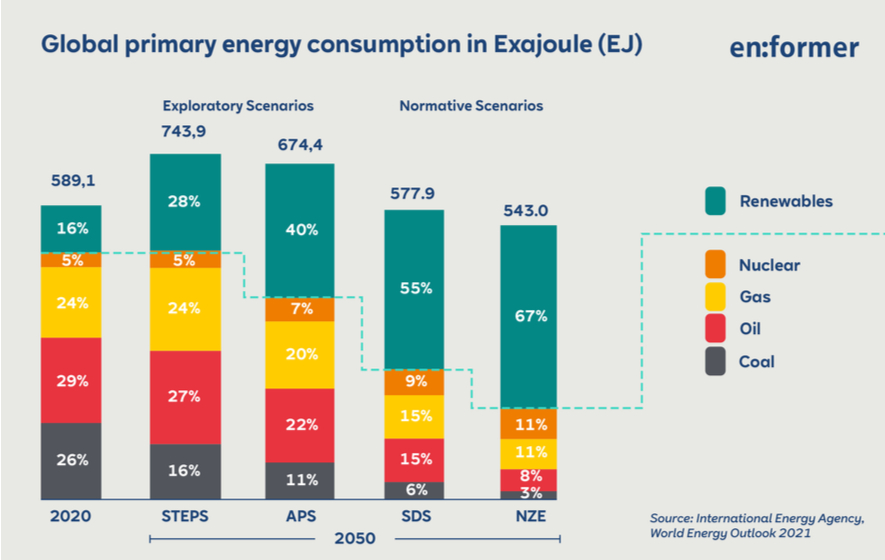 The normative scenarios: SDS and NZE

In the two normative scenarios – these are the Sustainable Development Scenario (SDS) and the Net Zero Emissions by 2050 Scenario (NZE) – the IEA shows how this gap could be closed according to the model calculations carried out. In the report, the IEA identifies four crucial measures:

1. Massive expansion in the use of clean electricity

Accelerating the decarbonization of the electricity mix is seen as the single greatest lever politicians have at their disposal. Half of the additional emissions reduction could be achieved at no cost to consumers.

This is to be achieved by improving material efficiency and changing consumer behavior. According to the IEA, 80 percent of the energy efficiency increase in the NZE over the next decade will lead to cost reductions for consumers.

This is seen as a very cost-efficient measure, especially in the value chain of the oil and natural gas industry.

All technologies required to reduce emissions by 2030 in accordance with the NZE are available. However, half of the emissions reduction that the NZE claims to be achieved by 2050 will have to be achieved by technologies that are still in the demonstration or prototype phase. This applies in particular to technologies in the iron and steel industry, cement and other energy-intensive sectors, as well as long-distance transport. The development of hydrogen based technologies and the implementation of CCUS are seen as critical.

In order to get the world on the path to the 1.5 °C target, investments in clean energy projects and the necessary infrastructure amounting to nearly 4 trillion US $ per year are required. Most of the capital for the in­vestment needs to be financed by the pri­vate sector – based on market signals and the framework set by politics.

In addition, public financial institutions are also seen as necessary, such as international develop­ment banks, to trigger investments where private players do not see a sufficient bal­ance between risk and chance.

The development of the individual energy sources is very different. The global con­sumption of coal decreases in all scenarios. But the difference between a 10 percent decrease in ASP by 2030 and a 55 percent decrease in NZE is determined by the speed at which coal is displaced in the electricity sector. The op­tions are shutting down existing capacities, retrofitting with CCUS and adding CO2- free or fuels with low-CO2 emissions such as biomass or ammonia.

The oil consumption will decrease in the future – and this for the first time in current model calculations of the IEA, even if there are strong deviations between the scenari­os with regard to the characteristics of the course. In STEPS, peak oil demand is ex­pected in the mid-2030s, in APS shortly after 2025. In order to achieve NZE, oil consumption must drop to 25 mb/d by the middle of the century. This corresponds to a decrease of around 75 percent.

Demand for natural gas will increase in all scenarios over the next five years. After that, however, the paths shown in the various scenarios differ greatly. In NZE, the devel­opment of new oil and gas fields is no longer considered necessary – beyond the projects that are already under development. In this scenario, global natural gas consumption will decrease by more than half by 2050 compared to the 2020 level. 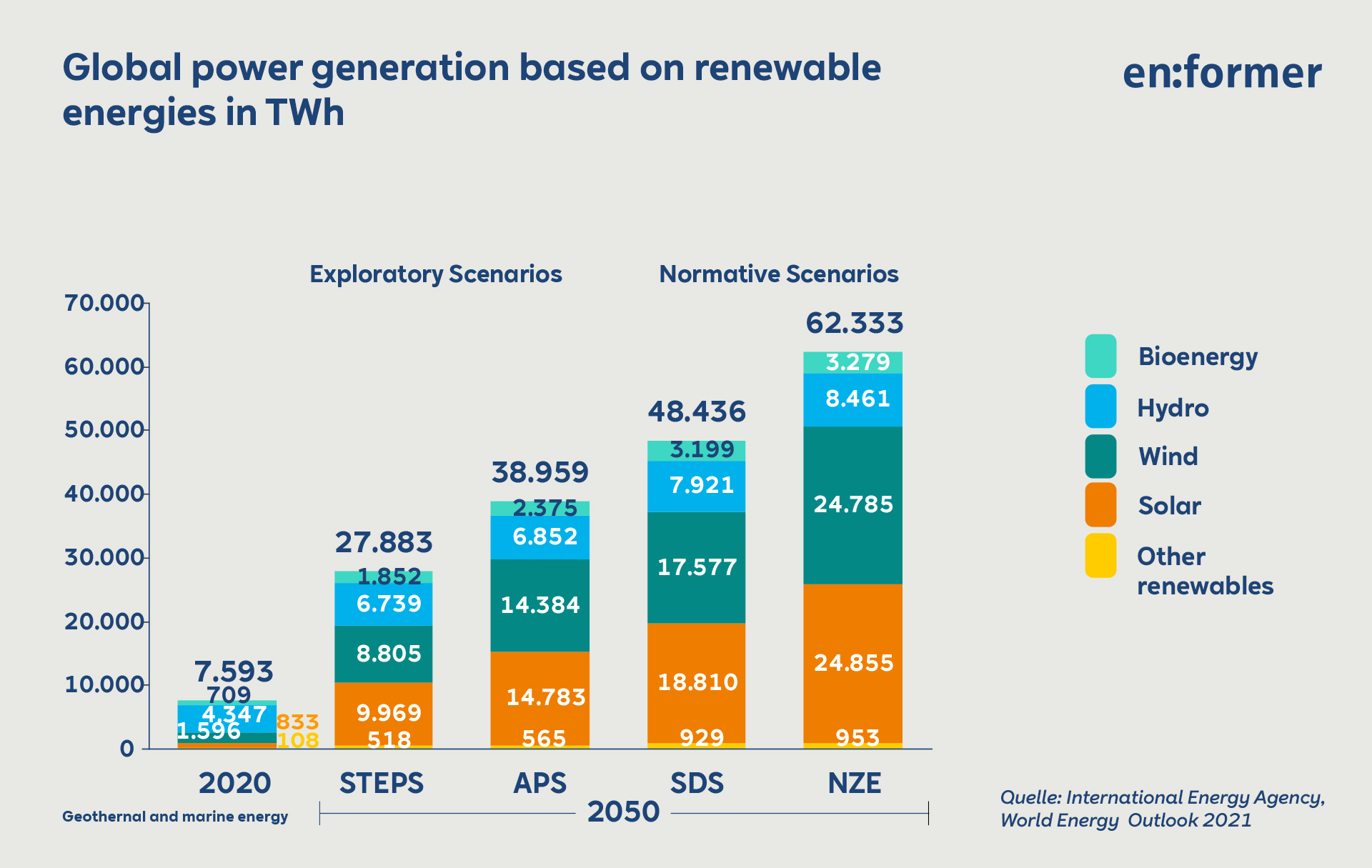 Renewable energies increase significantly in all scenarios – most strongly in the NZE. In this scenario, renewable energies ac­count for 67 percent of the primary energy con­sumption in 2050. Solar energy has in­creased twenty-three times compared to the level of 2020, and wind power has in­creased fifteen times. For hydropower and biomass – as well as for nuclear energy – a doubling of the absolute contribution is ex­pected. Nuclear energy then has a share of 11 percent in covering primary energy consump­tion. Fossil energies only retain a share of 22 percent.

Expansion of renewables in the NZE scenario

According to NZE, there will be 240 million PV roof top systems and 1.6 billion elec­tric vehicles worldwide in 2050. This re­quires battery storage, the expansion of power grids and controllable systems based on sources with low CO2 emissions, such as hydropower, geothermal energy, bio-ener­gy, hydrogen and ammonia as well as small modular nuclear energy reactors. Increas­ing digitization can support demand man­agement and the flow of data in general.

The NZE sees great market opportunities for manufacturers of wind turbines, solar panels, lithium-ion batteries, electrolysers and fuel cells. With a volume of over US $ 1 trillion by 2050, an order of magnitude comparable to the current global oil mar­ket is expected.

Click here to read part 3: The role of electrification and hydrogen for climate neutrality Read more
Part 1 of the series: Forecasts and scenarios for global energy supply Read more
2021 was a record year for corporate PPAs Read more