Buried treasure lies hidden beneath the city of Vienna, where a promising geothermal reservoir has been discovered at a depth of around 3,000 metres. This geothermal energy could be brought to the surface and fed into the district heating system via a heat exchanger. In other words, the subterranean hot water could one day be used to help heat houses and apartments.

In light of Vienna’s plans to transition to more sustainable heating methods, this environmentally friendly geothermal energy could be something of a gold mine. Because by 2040, the Austrian capital is planning to cover more than half its heating demand using carbon-neutral district heating and heat pumps. Subterranean heat is to contribute the lion’s share in its district heating plans and will increase the proportion of renewable energy considerably.

The GeoTiefWien research project is therefore investigating what the geothermal reservoir under Vienna actually looks like. Communal energy provider Wien Energie is overseeing the project which involves partners from the sciences and industry. The goal of the project is to use seismic measurements to create a 3D model of the geological subterrain of the Greater Vienna area, which will allow the team to identify potential deep geothermal energy sources.

The project is particularly focussed on Vienna’s eastern districts as experts believe they harbour the greatest potential. The results shall then serve as a basis for planning and executing future projects. In fact, a study, conducted by business consulting firm Compass Lexecon and commissioned by Wien Energie, found that the issue of heat supply is likely to be a deciding frontier in the city’s journey to carbon neutrality. After all, gas boilers, which are widely used to heat homes at present, are to be phased out by 2040. Experts say that this should prompt a major redesign of the system with green district heating playing a major role.

The GeoTiefWien project is looking to lay the necessary groundwork. Since 2016 the research team has been compiling a detailed replica of Vienna’s subterranean environment. The first step involved analysing existing data before moving on to carrying out seismic measurements above ground. This step will allow researchers to explore the geological structures and layers of rock deep underground and discover potential aquifers.

To make this happen, the project team distributed a total of 16,000 small sensors during two measuring phases between 2017 and 2019 in Vienna’s eastern districts. These sensors are able to measure underground seismic reflection – a process that generated around 50 terabytes of data, which was then analysed and merged with existing datasets. With the help of this pool of information, experts have been able to gauge the composition of the geological structures deep beneath Vienna.

Sensors and cables for the seismic measurements. During the project, 16,000 such small sensors were placed along the roadside or at important measuring points. 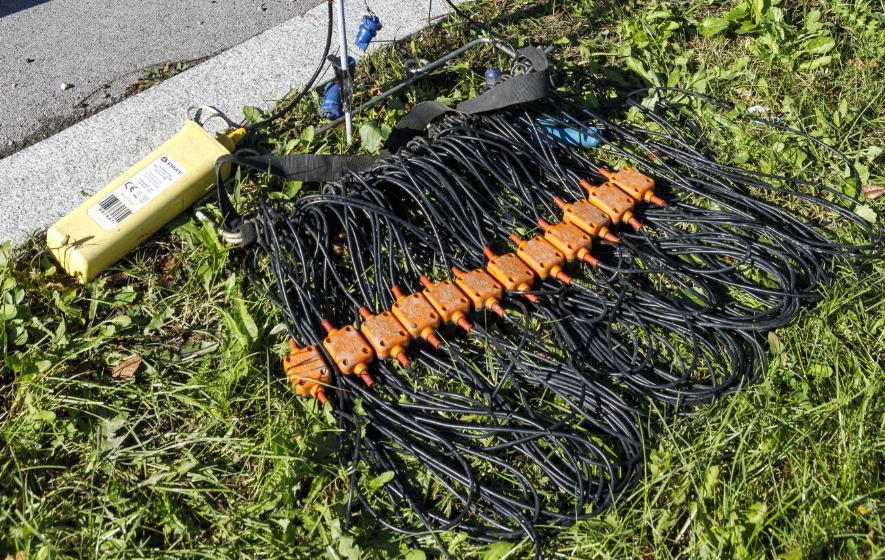 Sensors and cables for the seismic measurements. During the project, 16,000 such small sensors were placed along the roadside or at important measuring points.

Working in a similar way to an echo sounder or the ultrasound capability of a bat, seismic measurements involve vibrations which are sent deep into the ground. The signal is then reflected at depth by the existing rock layers and sent back to the surface, where sensors pick up the return signals.

In Vienna, the vibrations were generated and sent into the ground by seismic vibration trucks. The undersides of these trucks are fitted with a device that injects vibrations into the earth. The sensors, placed along paths and roads, record the seismic reflections deep in the ground and transmit the data to a recorder vehicle.

Once the data had been analysed in detail and the measurements had been evaluated, the research team presented a detailed geological 3D model of Vienna’s underground world in October 2021 with encouraging results. At a depth of about 3,000 metres, they had discovered a promising geothermal reservoir in what is referred to as the Aderklaa Conglomerate. This rock layer in the Vienna Basin was most likely formed around 20 million years ago. Experts believe the reservoir is well suited to be used as geothermal energy as the water is particularly deep, meaning temperatures could be as high as 100 degrees Celsius.

The model shows the different rock layers under the city. With the Aderklaaer conglomerate, around 3,000 meters below ground, the research team was able to identify a promising hot water deposit. 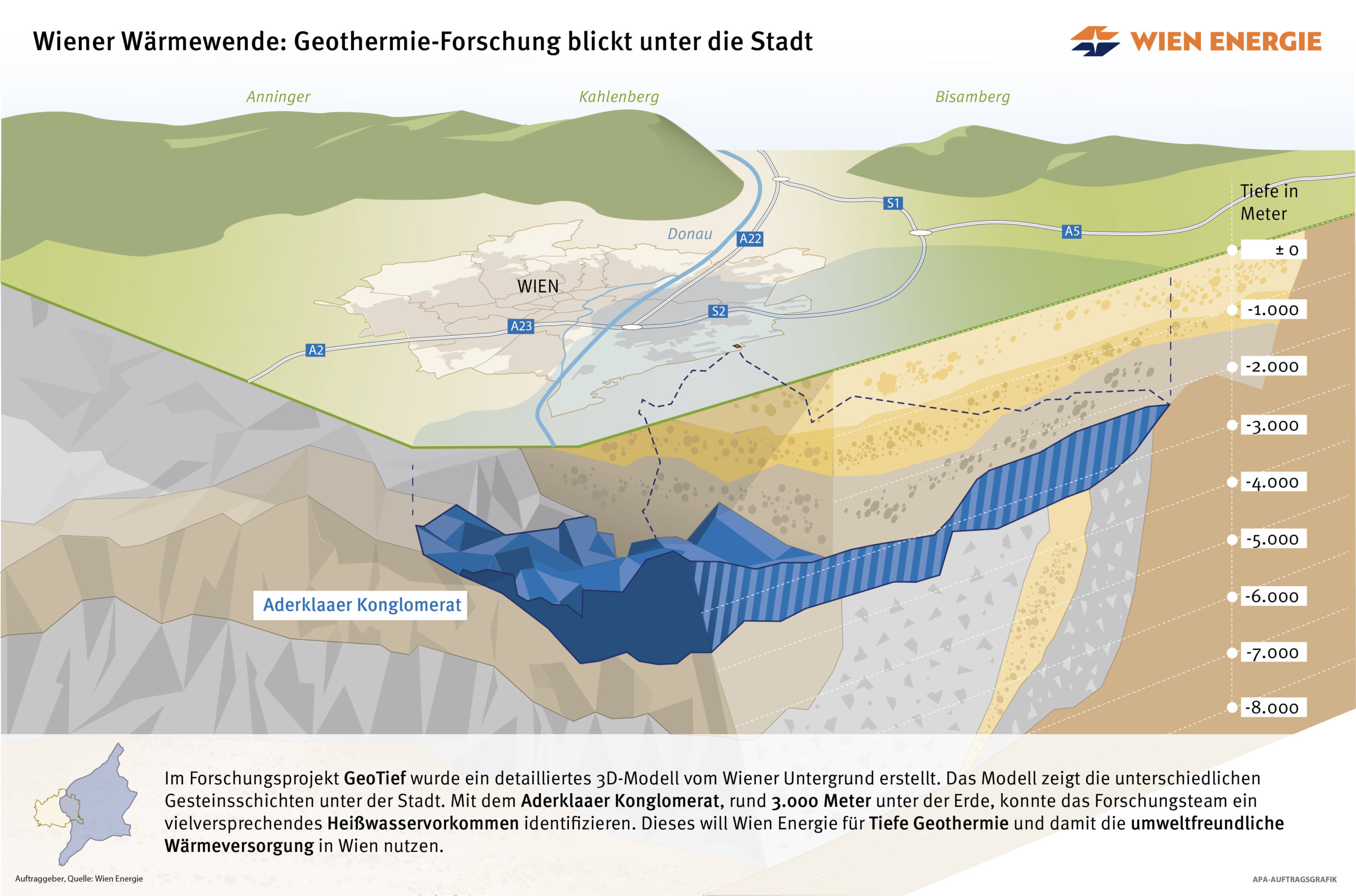 The model shows the different rock layers under the city. With the Aderklaaer conglomerate, around 3,000 meters below ground, the research team was able to identify a promising hot water deposit.

Above ground, the area in question lies roughly between the districts of Donaustadt and Simmering in the east of Vienna. This is where the energy provider sees the geothermal energy having the largest impact on district heating. Experts put the possible capacity at up to 120 megawatts of thermal output.

Practical tests in the district of Essling

That being said, more tests will be needed before a geothermal plant can be built. So to help move things along, a former exploratory drilling site in the district of Essling, east of Donaustadt, is to be made operational again for testing by spring 2022. Tests will involve water being pumped via a mobile crane and fed into purpose-built basins. During this process, the experts will examine various properties such as the permeability of the rock.

The practical tests in Essling represent the last project phase of GeoTiefWien for now. If the results are promising, Wien Energie plans to supply up to 125,000 households with carbon-neutral district heating by 2030. Thanks to geothermal technology, it will now be possible to recover the treasure buried deep beneath the city.