An ever-growing number of coal-fired power stations are to be taken off the grid in Europe. And according to the COP26 International Climate Conference in Glasgow, this is a trend that is only set to gather steam. Not only will this development have an impact on power generation, but it is also set to change the way in which many cities generate their heat. Because it is coal-fired power plants that have been used to supply surrounding cities, business parks and industrial customers with district heating. Now, many innovative projects are looking to renewable energy to fill this void. In a previous edition, the en:former took a closer look at heat supply in the Swedish town of Malmö. Next, we’re headed a little further west to the Danish town of Esbjerg.

Esbjerg has traditionally been known as something of an ‘energy metropolis’ due to city’s strong roots in oil and gas. What’s more, the port of the 80,000-strong town is also home to a hard coal-fired plant, generating power and heat. This warmth is then transported into buildings via subterranean pipelines, enabling the power station to meet around half the city and its surroundings’ district heating needs. The other half is supplemented by a waste incineration plant.

Now that the port city has its sights set on becoming carbon neutral by 2030, the town will need to reconfigure its energy supply from the ground up. To this end, 2023 will see the coal power plant being taken offline, at which time coal-fired electricity will be replaced by green wind power, which will be used to provide the necessary district heating.

How is this possible? The coal-fired power station is to be replaced with a vast heat pump system. The pump, which was commissioned by drinking water and district heating firm DIN Forsyning and is currently being built by MAN Energy Solutions, boasts impressive performance stats. At a total capacity of 50 megawatts (MW), it is one of the largest systems of its kind in the world. But it’s not just the facility’s size that sets it apart. The system uses carbon dioxide as a refrigerant, enabling higher temperatures versus conventional cooling agents. In contrast to other refrigerants, CO2 is also non-toxic and flame-resistant, which in turn improves the safety of the facility.

One day, the new combined cycle power plant is to generate around 235 gigawatt hours (GWh) of heat for around 100,000 locals. In other words, enough to supply the city and environs. As the necessary electricity is generated using wind farms near the port, the system is considered to be carbon neutral.

The basic principle of a heat pump never changes: a refrigerant runs through a cycle comprising a total of four steps – evaporation, compression, condensation and expansion. First, heat energy is applied, causing the refrigerant to evaporate. This energy is generated locally – the plant in Esbjerg, for example, uses seawater. The resulting gas is then compressed under high pressure, which automatically drives the temperature up. The compressor used here runs on electricity. If it is renewable, as is the case in Esbjerg, then the heat pump is deemed carbon neutral. After that, the gas is fed through a condenser and returned to its liquid state. The condenser transfers the heat from the refrigerant into the heating system which then disperses it into the district heating grid. Finally, the system decreases the pressure on the liquid, which causes the liquid to cool rapidly before the process starts anew.

This is what MAN ES' new ETES plant for the city of Esbjerg will look like. 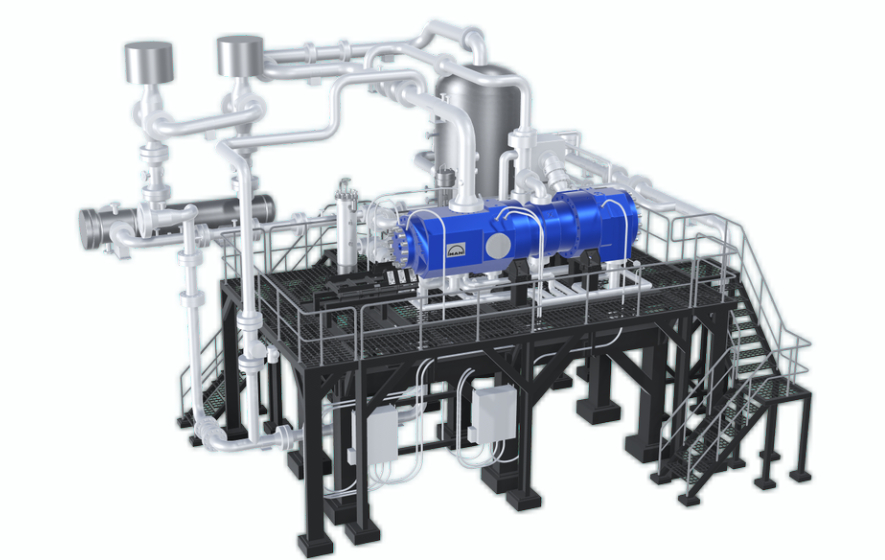 This is what MAN ES' new ETES plant for the city of Esbjerg will look like.

At almost 220 bar, the compressors in Esbjerg will be working with much higher pressures than many other heat pumps. This is the key to using carbon dioxide, which has the advantage of enabling the refrigerant to reach temperatures of up to 150 degrees Celsius. Industrial heat pumps with different refrigerants, on the other hand, only work at notably lower temperatures, making them unsuitable for generating district heat.

The electrothermal energy storage technology (ETES) used by MAN ES theoretically offers one additional benefit. The system is able to store the generated heat energy, making it possible for more power to be converted than is needed for heat supply. This means excess renewable electricity could be stored and fed into the grid when demand is high.

To achieve this, the process must be reversed. The pressurised liquid CO2 is heated and evaporated using stored thermal energy. During this process it expands considerably, driving a turbine which produces electricity via a generator. This means the heat pump can be used to bridge short-term peaks in demand on the power grid. The planned system in Esbjerg, however, won’t be able to harness this potential as it is only designed to produce heat energy.

These vast heat pumps could one day soon be making their way to Germany. MAN ES is looking to conduct a study under the umbrella of the progres.nrw funding programme together with RWTH Aachen University and the Aachen Municipal Utility to examine the necessary conditions for construction in the Aachen region.

Clean energy spending growth is expected to slow in 2023, but should rebound as inflation concerns recede
Read more
2023-01-27