Storage solutions are being urgently sought, as energy stores are increasingly important, due to the expansion of renewable energy. This is because, unlike plannable fossil-fuelled electricity generation, output from wind and solar farms fluctuates depending on the time of day and weather. Storage options are being sought to prevent grid overloads when power supply exceeds demand and ensure security of supply when little electricity is generated. There are various approaches to solving this problem, including lithium-ion batteries, thermal energy stores and organic flow batteries. In view of the substantial demand, however, the sector is on a constant search for novel, innovative ways to store energy efficiently. A new series has been launched by en:former to showcase some exciting energy storage projects.

Carbon dioxide is considered to be the primary cause of climate change. Switching to renewables is the approach taken to reducing emissions of this greenhouse gas. Paradoxically, this very gas is set to help spur the energy transition. Italian startup Energy Dome is developing a climate-friendly CO2 energy store involving the use of the greenhouse gas as storage medium.

The basic concept is simple: whenever surplus electricity must be stored, existing energy is used to compress and liquefy carbon dioxide, after which it is stored under pressure. This charges the stores. On demand, the carbon dioxide is returned to its original state. The compressed air resulting from expansion drives a turbine, which generates electricity.

Energy Dome primarily combines elements of known storage techniques for its CO2 energy store, harnessing the principle of cryogenic energy storage systems (also referred to as liquid air energy storage – LAES), which involves liquefying air at extreme temperatures and then storing it. The Italian startup applies this to CO2 and also integrates aspects of compressed air energy storage (CAES) and thermal stores: air is compressed and stored, along with the heat generated in the process.

Dome store based on biogas plants

The company’s name derives from the dome-shaped CO2 store, which holds the gas when the energy store is not charged. The pressure for storage must be maintained at a steady level. Rigid containers, made of steel for example, would not be up to the task as gas feeds and withdrawals would result in constant pressure changes. The interior of the dome, however, can adapt to the fill level, thereby adjusting the pressure. This method has long been used for instance to operate biogas facilities.

“This is our big advantage, since we want to be in the market as fast as possible. Everything we use is based on existing technologies and components. All our team members have years-long experience in the energy business and are injecting all of their experience into the project,” said Claudio Spadacini, CEO and Founder of Energy Dome.

This is a vision of a CO2 energy storage plant combined with a solar farm in a rural area. The domed CO2 store is the biggest part of the plant.

A larger system comprised of several CO2 energy storage modules could also be housed by a factory-like building. 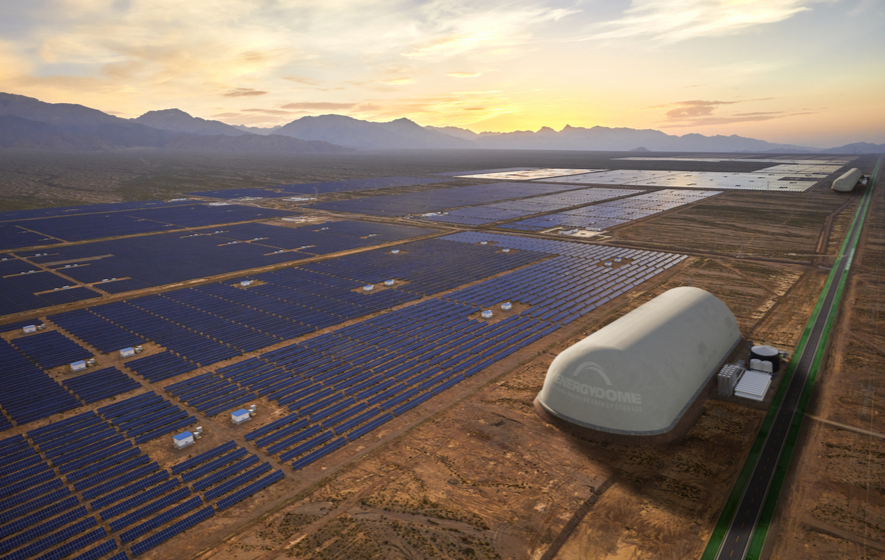 This is a vision of a CO2 energy storage plant combined with a solar farm in a rural area. The domed CO2 store is the biggest part of the plant. 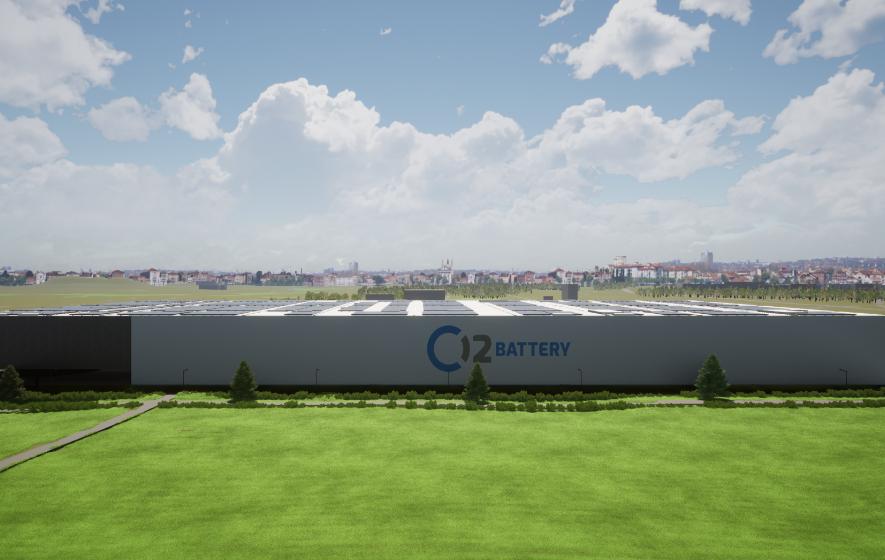 A larger system comprised of several CO2 energy storage modules could also be housed by a factory-like building.

Combining these known features is the innovative spirit of the project, as demonstrated by its mechanism: To charge the store, the carbon dioxide is extracted from the dome using huge pumps and compressed at high pressure in a compressor. This naturally produces a lot of thermal energy. The heat radiation is stored in thermal energy storage systems at a temperature of approximately 350 degrees Celsius using steel shot. The high pressure converts the carbon dioxide into ‘supercritical’ carbon dioxide, putting it into a state in which it can liquefy. This is why, in the end, it is passed through a condenser, after which it can be stored in liquid form in purpose-built containers.

Whenever the energy is needed, the process is simply reversed. This involves the liquefied carbon dioxide flowing through an evaporator, which puts it in gaseous state and heats it using the waste heat. This causes the greenhouse gas to expand considerably – enough for it to drive a turbo generator. Then the carbon dioxide is channelled back into the dome where it is stored for its next use.

The result is a closed cycle, with zero carbon dioxide emissions. The dome needs to be filled with the gas just once. “At the moment we are looking into buying the CO2 from carbon capture companies. It would be nice to fill our system with fully ‘green’ or ‘blue’ CO2,” the company founder states.

Energy Dome plans to build plants featuring a modular and freely scalable system. Operators can choose between 10-MW or 25-MW compressors. The modules for the store would range from 50 MWh to 200 MWh. A plant with 25 MW and 200 MWh could store electricity for about eight hours, making it suitable for deployment near wind and solar farms remote from densely populated areas as the system takes up a lot of space due to the dome structure.

Market maturity planned for as early as 2022

Energy Dome is on an ambitious schedule with its CO2 store. Although the firm only began operating in January 2020, it plans to launch its technology on the market and start building plants for customers by 2022. In the run-up, Energy Dome envisages building a first pilot plant with an output of 2.5 megawatts (MW) and a storage capacity of 4 megawatt hours (MWh) to serve as a demonstrator on the Italian Island of Sardinia and commissioning it in the first quarter of 2022. “2.5MW is the smallest size to demonstrate the technology at scale. After a successful demonstration, the demo plant will stay in operation and generate revenues,” Spadacini explains.

Stabilizing the grid: 423 battery racks in 47 overseas containers can store up to 117 megawatts of electricity
Read more
2023-01-13