For centuries now, mankind has sought ways to harness the force of the wind. Way before industrialisation, the first wind mills were used to grind grain or pump water. It is such techniques that spawned the wind farms used to generate electricity that have become a fixture in modern-day landscapes. The current generation of mammoth wind turbines with rotor diameters of over 100 metres and capacities of several megawatts is the result of intensive research and development work.

Manufacturers leave no stone unturned to maximise efficiency – an endeavour that often takes years. However, advancing the development of various turbine variants is not the only item on the agenda of Germany’s test centres working under real-world conditions. A new project taken on by the German Aerospace Centre DLR aims to explore the interplay between turbines and intelligent control systems. Associated findings may enable entire wind farms to be optimised.

Prototypes must pass a series of tests prior to certification

Windtest grevenbroich, which recently celebrated its 25-year anniversary, is subjecting prototypes to a rigorous battery of tests in North Rhine-Westphalia. RWE has also been involved from the start, in order to gain early knowledge for wind energy technology. Manufacturers can set up new wind turbines and put their operating modes through the motions on the Frimmersdorf Heights mine tip, which is located in the Rhenish coal mining region.

But the buck doesn’t stop there: “To obtain permission for mass production, every turbine type has to be certified, and it has to satisfy a long list of criteria in order to meet the standard. Our comprehensive test infrastructure enables us to make accurate performance, grid compatibility, wear and tear and noise measurements,” declares Frank Albers, the department head at windtest responsible for the Grevenbroich test field. “Of course, we can perform further measurements, for instance to provide measurable proof of the extent to which material strength can be reduced and vibrations can be lowered.” Based on the findings from the real-world tests, the developers and manufacturers can enhance prototype efficiency while ensuring safe operability. To accomplish this, they have been given an initial seven years, which is how long a test slot can be used.

Making wind energy more efficient is also one of the goals DLR researchers aim for at the Krummendeich site in Lower Saxony. This is where a hitherto unique platform is being built in cooperation with German Wind Energy Research Association FVWE. Besides two conventional wind turbines, which are fitted with measuring devices from their foundations 20 metres underground all the way to the tips of their rotor blades at a height of 150 metres, the wind energy research park will feature a small, modular plant that is currently under construction. “The wind turbines will be positioned one behind the other, aligned to the main direction from which the wind is blowing. This winding-down configuration would be detrimental to commercial use, but enables us to look into a number of interesting propositions. For instance, we want to gain valuable insights that help us to further the development of control systems,” explains Jakob Klassen, the DLR project manager in charge of setting up the research wind farm. A total of five towers with a maximum height of 150 metres brim-full of measuring technology will enable the researchers to collect massive amounts of data between the wind turbines as well. They also intend to evaluate information such as weather forecasts.

Illustration of the planned DLR wind test field in Krummendeich. The wind turbines are positioned one behind the other. Inbetween, 150 m high masts with measurement technology will be installed for research purposes. 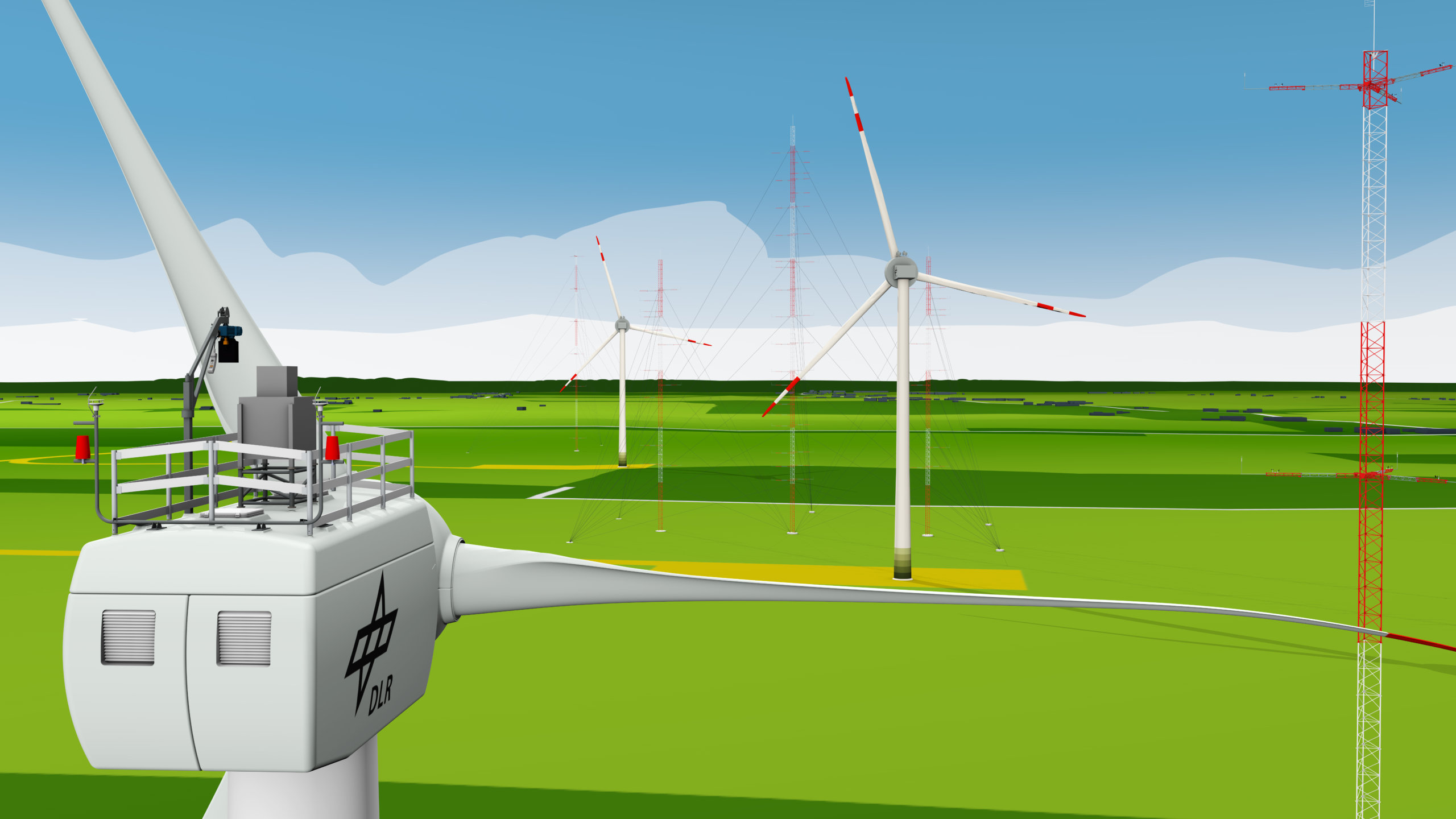 Illustration of the planned DLR wind test field in Krummendeich. The wind turbines are positioned one behind the other. Inbetween, 150 m high masts with measurement technology will be installed for research purposes.

Researching noise emissions will be another major object of the project, as they play a key role in public acceptance of this technology. Running wind farms in optimised mode is a potential solution. This would involve strategically throttling output from individual wind turbines. Moreover, adjusting performance in this manner would result in optimised turbine load right after shutdown, thus positively affecting maintenance and extending total system service life.

DLR’s venture has something in common with the work done by Frank Albers and his team: “Since we got started back in 1996, we have tested over 20 turbines and participated in numerous innovative projects,” he sums up, adding that experts can use the measurements to improve on a number of issues, including reducing acoustic emissions. After all, besides entire wind turbines, they also test individual components: “Time and again, we’re approached by vendors inquiring whether they can test new components such as pitch and yaw motors, lightning protection systems, fire safety systems, oils and lubricants on installed turbines. This can usually be done with the manufacturer’s consent once the certification measurement campaigns have ended.” For instance, special trailing edge modules designed for rotor blades were put through a field trial and came out tops: The engineers found that jagged edges reduced noise disturbance substantially.

Among the experiments that will also be possible at Krummendeich Research Wind Farm are tests on a host of modular wind turbine components that can be modified and swapped in and out. “These are in-house developments from DLR. The turbine is much smaller than the two multi-megawatt variants. This gives it a decisive advantage especially in terms of conversion costs incurred for experimental modifications. In addition, given that the modular turbine has a rotor diameter of 40 metres, it is big enough to validate concepts from the wind tunnel under real-world conditions. We can manufacture rotor blades of this size ourselves and modify their every detail. For example, one could fit the rotor blades with two-part tips, enabling us to test bolt-on elements very easily,” explains Klassen.

Back to the Rhenish lignite mining region: The rapid evolution of wind technology is leading to a shortage of slots on the test field in the Rhenish lignite region. Whereas eight turbines could easily be accommodated in the beginning, today’s dimensions allow for a maximum of six. “When things kicked off, both turbines and rotor diameters were much smaller than they are today. Now we will soon set up a prototype with a capacity of 5.5 MW. This compares to the 600 kilowatt ratings of the first generations,” says Albers.

Ever-larger turbines and increasing dependence on renewable energy are an additional challenge. After all, the sudden failure of a MW-class turbine can have an impact on the power grid. This is why researchers at DLR plan to refine the monitoring systems as well, with a view to optimising maintenance and repair work. Experts from DLR’s Institute of Aviation System Engineering will jump onboard as soon as the large research facility enters into normal research mode, which is envisaged to happen in early 2023. The experience in monitoring and control technology in the aviation sector will contribute to making future wind farms more intelligent.

Evaluation tools and simulations enable increasingly accurate forecasts. Some of the measurements belonging to the standard repertoire in Grevenbroich today can be pared down in the long run. But Frank Albers is convinced that this is no reason to be concerned: “Recently, a rotor blade of a test turbine undergoing a trial run broke, although all necessary preparatory inspections and calculations confirmed it was stable. This shows that although simulations are coming to the fore thanks to ever-increasing computing power, they are still no replacement for field trials.”

Germany occupied one of the top spots in the world’s wind energy build-out rankings early on. The country has subsidised the technology since 1991. In 2003, about half of Europe’s total capacity was installed in the Federal Republic. According to business data platform Statista, the country came in third in the global order of merit, boasting just under 63 gigawatts (GW) of installed capacity, and trailing only China and the USA. Research is also accorded great importance. For instance, the Growian test turbine was built in Silesia-Holstein as early as the 1980s. Back then, its rotor diameter of 100.4 metres and nominal rating of three megawatts (MW) made it the largest in the world.