Over the last 25 years, solar energy has grown from being something of a niche product to the fastest growing power generation technology in the world. According to estimates published by the International Energy Agency, last year alone, solar systems boasting a total capacity of 156 gigawatts were built around the globe. However, the solar energy boom has introduced a new elephant in the room: the matter of recycling. What will happen to the solar cells once their average life span of approx. 25 years is up and they are taken out of rotation?

The good news: solar cells are already partially recyclable. However, it isn’t possible to reuse all their raw materials by conventional methods. Particularly the more valuable components, such as silver, are lost. So, researchers have renewed their efforts to identify new recycling techniques in order to make solar systems even more sustainable. A German start-up company has now patented precisely such a method, which it intends to use on an industrial scale.

Solar panels: It’s what’s on the inside that counts

To understand why recycling solar cells is so complex, it’s worth taking a look at the inner workings of a solar panel. Much of the module is comprised of glass (as much as 75 percent when it comes to conventional panels). Other components incorporate metals such as aluminium (frame) and copper (wires) as well as plastics, which are used e.g. as insulation. The individual layers of a solar panel look something like this:

© own representation based on shutterstock.com, Alejo Miranda 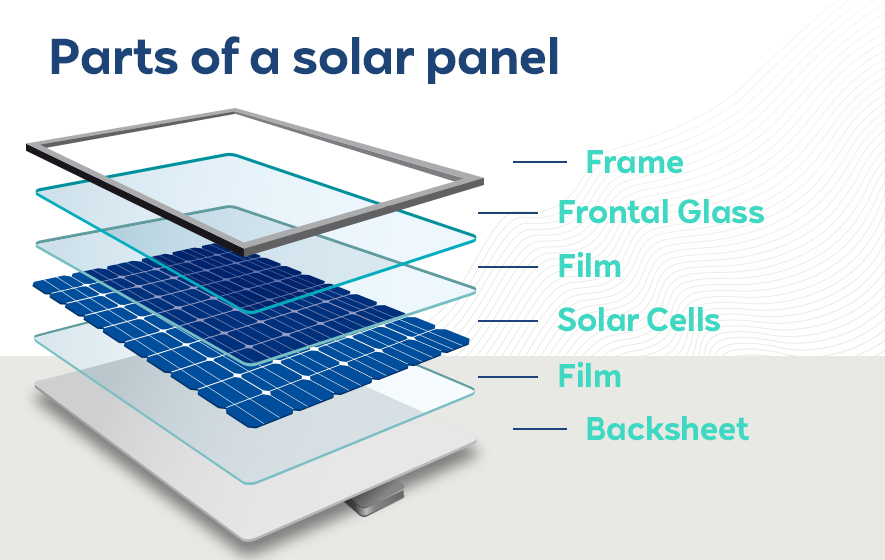 © own representation based on shutterstock.com, Alejo Miranda

Glass and aluminium are both easy to recycle. The panel simply needs to be disassembled to separate aluminium and glass parts, which are then recycled and reused for new parts. Other elements, on the other hand, are encapsulated using plastic films, which makes them much more technically complex to separate.

According to reports, German start-up Solar Materials, based in Braunschweig, has now found a way to reclaim the silicon and silver buried in old PV modules. The company has announced that it will be the first process in the world which can be used to recycle all raw materials economically and energy-efficiently.

“Until recently, the process was developed as a pilot project, but this year we launched our first pilot plant”, reports Jan Bargel, Technical Director of Solar Materials. The patent for the innovative recycling technology is already pending. “Our technology allows us to precisely target the plastic film. Once this layer has been removed, we can then simply lift away the glass to reach the silver on the solar cells as well as the cell itself”, explains Bargel. The company has not yet released any further information on its findings.

The director sees this new method being associated with a multitude of benefits: “Our recycling process uses much less energy than needed to extract new raw materials. It is also notably more energy efficient than other recycling method currently being used in the solar world.” According to company statements, using recycled materials saves about 80 per cent of the energy usually necessary to produce new components made of primary raw materials. What’s more, the new technique is not only able to reclaim almost all the panel’s silver and silicon components, but the extracted raw materials also have a high degree of purity.

In developing this process, the start-up is looking to close the solar panel life cycle by enabling the reuse of silicon and silver for new products – as is already possible with the glass involved. This should make a valuable contribution to improving solar panel resource efficiency.

Solar Materials is now taking its next step and is building its first industrial recycling line in Magdeburg. The line is to be finished by late-2023 and will be large enough to recycle around 4,500 metric tons of solar panels using the new technique.

There should be more than enough material to recycle by then, as the number of discarded solar panels is set to increase drastically. In Germany alone, estimates project that by the end of the decade, there could be more than 100,000 metric tons of solar panels waiting to be recycled annually.