“Large hailstones can go straight through conventional photovoltaic panels,” says Jörg Althaus without batting an eyelid, “even the smaller ones do damage. They leave behind small, microscopic tears in the solar cell that, although invisible to the naked eye, can result in decreased performance over time.” Althaus has been in the business for over 20 years. At TÜV Rheinland’s Cologne testing site, his team simulate extreme weather conditions – and analyse how well solar panels can withstand them.

One technique used by his colleagues is to shoot large hailstones at solar cells. A high-pressure cannon fires them at a panel, from a distance of one metre and at 80 to 110 kilometres per hour. Perfect ice spheres with a diameter of 20 to 50 millimetres serve as the ammunition. “In the wild, no two hailstones are the same and they’re much less compacted due to irregular air pockets. This means the force of natural hail is actually much smaller, even if the stones are the same size as the ones we use here,” explains Althaus. “At the end of the day, we don’t normalise our tests to precisely re-enact what happens, we choose our parameters so the tests can be easily repeated anywhere in the world.” Nevertheless, the experiments still allow the team to draw meaningful conclusions as to the impact a hailstorm could have on the functionality of a solar farm.

The solar energy boom has meant that PV systems are now being installed in the most varied environments. And each has its own unique challenges: At sea, the panels have to withstand the sea breeze. In the mountains it’s frost and snow. In the desert they have to contend with sandstorms and extreme heat.

Thus simulated hailstorms are just one of the many scenarios PV panels are subjected to in testing centres. Analysts also place them in what are referred to as environmental test chambers to expose them to alternating dry and moist atmospheres – and all manner of extreme temperature changes. The panels can also be sprayed with sand or subjected to heavy weights to determine how they would perform under a thick blanket of snow. Special UV spotlights are used to test the solar resistance of plastic components.

This is how the solar panels are tested at TÜV Rheinland. They are shot with standardised hailstones from a short distance. 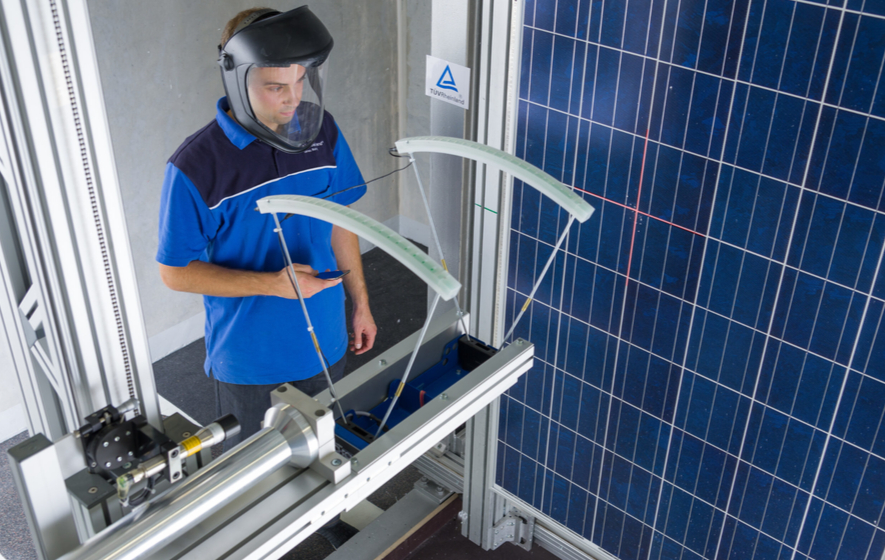 This is how the solar panels are tested at TÜV Rheinland. They are shot with standardised hailstones from a short distance.

The engineers also test for chemical corrosion from ammonium, for example, which poses a particular danger to rooftop systems exposed to animals. Salt spray, on the other hand, is used to test panels destined for the coast.

“Not every model or every batch needs to pass every single test,” clarifies Althaus. “If a panel is to be used in a solar farm in the Sahara, for example, you’re going to focus on how much performance is likely to suffer when the cell is exposed to sand and dust. In Germany, we’re more interested in its ability to withstand hailstorms.”

Bad weather as a danger to PV systems

“In Germany, hailstones and heavy snow are the most frequent natural causes of damage to photovoltaic systems,” says Anja Käfer-Rohrbach, the Deputy Chief Executive of the German Insurance Association: “They are also most likely to trigger a sudden event-based rise in regional PV panel claims.”

This regional rise in claims is known as Kumulschäden in Germany (accumulated damages in English), a concept that describes damages triggered by a single event such as bad weather. However, these claims are not problematic for power supply as such. Even if Germany’s largest solar farm, which is located in Weesow-Willmersdorf has a peak performance (MWp) of 187 megawatts, were completely destroyed by a storm, it would still have almost no impact on grid stability. What does make a difference, however, is property damage and downtime that cause considerable financial losses. For small operators, the resulting costs can go as far as to threaten their very livelihood.

This is why creditors ask for proof of the security of the systems. “Generally speaking, a photovoltaic panel has to be certified in accordance with IEC 61215 and IEC 61730,” confirmed the German Credit Bank (DKB) when queried by en:former. According to its own statements, the DKB is the “largest financier of the German energy transition”. The two International Electrochemical Commissions (IEC) standards, which also cover hail and fire damage, are used to certify various types of PV systems.

“These certifications are carried out in one of our three laboratories in China, India or Germany. Today, most of our work is most definitely performed in China, where the majority of panels are produced,” says Althaus. “That being said, our customer base is not limited to manufacturers. It also includes wholesalers and operators wanting to check whether their specific batch meets the promised standards.”

In this case, it’s more a question of certification than quality assurance. The testing process also allows customers to identify potential damage that could have been caused during transport. Micro tears are invisible to the naked eye and are not always detrimental to performance. In the long term, however, they can accelerate wear and tear and reduce yield.

“Once the damage manifests years later, it’s almost impossible to prove when it first occurred”, explains Althaus. “It is then usually too late to file claims for recourse against manufacturers or transport companies. The larger a delivery, the more quality assurance makes sense.”

Insurance companies use the results of these tests for risk assessments. The VHV Group confirmed to en:former that risk-relevant factors such as the place of installation were considered when offering insurance deals, particularly when it came to electronic insurance and income protection insurance. Depending on the investment’s loan-to-value ratio and the size of the system, the DKB also considers the same information before approving a loan. Ultimately, it comes down to something known as a bankability analysis, which evaluates long-term return prospects.

In order to be able to assess how the individual factors affect functionality clearly and at manageable costs, it is necessary to carry out separate tests. “We use one solar panel for testing snow load performance and another for hail,” explains Althaus. “This allows us to make clear distinctions when giving the customer feedback as to the strengths and weaknesses of the individual products.”

Speaking of hail – the minimum threshold for a solar panel to pass tests in Germany is being able to withstand being bombarded with unnaturally compacted, normalised hailstones having a diameter of 25 millimetres. This means it is usually protected against natural hailstones the size of a golf ball. “Most panels can manage that,” says Althaus, “but any bigger and it’s a whole other story.”