The US’ biggest ever auction for offshore wind capacity has produced resounding results, raising more funds even than for previous offshore oil and gas leases. A huge total of $4.37 billion was bid for 488,000 acres in the New York Bight. RWE Renewables was to the fore, winning the largest of six areas offered, as part of the Bight Wind Holdings consortium.

The New York Bight lies off the coasts of New York state and New Jersey. With relatively shallow waters ranging from 31 to 63 metres in depth, it offers great potential for traditional fixed-bottom offshore wind installations close to some of the US’s largest urban coastal centres. The closest distances to shore vary from 20 to 69 nautical miles (nm) for New York state and from 27 to 53 nm for New Jersey. RWE’s acreage is one of the closest and shallowest. 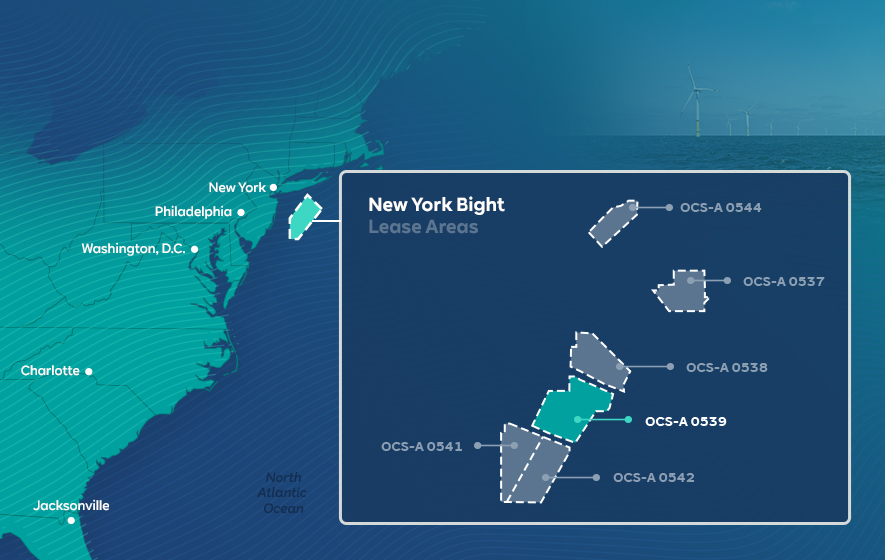 In total, Washington expects the lease sale to result in an estimated 5.6-7.0 GW of clean electricity generation capacity. However, the power ratio assumed by the government was conservative at 3 MW/km2, suggesting the upper end of the estimate, if not more, could be realised.

Lease success is tip of the iceberg

The enthusiasm shown by developers for the offshore lease sale – the first in three years and the first under the Biden Administration – indicates the momentum building in the emergent US offshore wind sector.

Development of the New York Bight should not only provide large volumes of renewable energy, but create massive confidence for investment in the US offshore wind supply chain, creating thousands of new jobs. Washington estimates the offshore wind sector will provide 80,000 well-paid posts by 2030.

However, there is plenty more activity behind the scenes as the US attempts to build a new, sustainable industrial sector.

The Bipartisan Infrastructure Law enables the construction of thousands of miles of transmission lines needed to connect renewable energy projects to the US grid. The Department of Energy is building on this with the launch of the Building a Better Grid initiative.

The Department of Transportation has announced port investments to support the development of offshore wind areas. The first of these include a $29.5 million grant for the Port of Albany in New York state to develop vacant areas along the Hudson River for the US’s first offshore wind tower fabrication and assembly facility, and a $20 million grant for the Portsmouth Marine Terminal to construct staging and storage areas for wind turbine components.

These developments follow on from the approval of the US’ first two large-scale offshore wind farms, Vineyard Wind and South Fork Wind, as well as the development of a roadmap for seven offshore wind lease sales and the expected completion of project reviews for 16 multi-billion dollar offshore wind projects, representing 22 GW of capacity by 2025.

Over the course of this year, the Bureau of Ocean Management also plans to conduct reviews of wind energy areas offshore California and explore potential in the Gulf of Mexico and off the country’s central Atlantic coast and Oregon. Lease sales in the Carolina Bay and offshore California will also be advanced, laying the groundwork for the expansion of offshore wind beyond the US’ eastern seaboard.

Moreover, the long-term project pipeline has grown and grown to exceed 30 GW. The question now is whether construction can be completed in time to meet the government’s 2030 target.

According to S&P Global Market Intelligence, the scoreboard looks like this: 932 MW under construction; 5,104 MW in advanced development; 10,386 MW announced and 14,318 MW in early stage development.

S&P’s analysis suggests that if all planned projects are completed on time, including some early stage projects which have yet to announce targeted completion dates, the US could have 4.7 GW of offshore wind in operation by 2025 and just over 30 GW by the end of 2030, with almost 10 GW being completed in 2030 itself.

At this rate, even if some projects are delayed, the US is on the cusp of transforming itself into one of the most dynamic offshore wind markets worldwide.