Fukushima is a name that has long been synonymous with the major earthquake and reactor catastrophe of 2011. It has been 11 years since the severe Tohoku earthquake, which registered 9.1 on the Richter scale, and the following tsunami severely ravaged the north of Japan. This led to the meltdown of three reactor blocks of the Fukushima Daiichi nuclear power station. Over 150,000 residents had to abandon their homes in Fukushima Prefecture, which encompasses 59 communities that are home to a population of some 1.8 million. To this very day, thousands of the evacuated residents still have not returned. And vast expanses of farmland lie fallow due to pollution from radiation.

At the Fukushima Hydrogen Energy Research Field green hydrogen is produce. Solar power generated by the adjacent solar plants is used for production.

However, these deserted areas are being given a new lease on life. Electricity generation has resumed in the surroundings of the damaged power plant – and it’s clean to boot. Thousands upon thousands of solar modules have been built there in the last few years. In addition, Fukushima Prefecture recently announced new plans, envisaging the construction of another eleven solar farms and ten wind farms.

Agrivoltaics – solar panels on top, potatoes down below Read more

Fukushima among the leading pack of renewables development

A great deal has happened in the region since 2011. The reactor incident triggered a widespread rethinking process in Japan – above all in the affected areas. Whereas nuclear power stations generated roughly a quarter of the country’s electricity, almost all of them were taken offline after the catastrophe. Only a small portion has since been recommissioned. In 2019, nuclear energy had a share of six to seven percent. The importance of renewable energy, with solar leading the way, rose commensurate to the drop in the significance of nuclear power.

Fukushima Prefecture is a trailblazer in this process. Back in 2014, the district administration announced its plan to become carbon neutral and fully satisfy demand for electricity with renewable energy sources by 2040. Renewables’ target share by 2030 is 70 percent. The region in the northeast of the main island of Honshū is making good progress. Renewables drove up their share from 24 percent in 2011 to 43 percent in 2020. The prefecture grabbed top spot in domestic solar power production and came in eighth in wind energy in the same year.

The positive trend is underpinned not only by numbers, but also by the landscape, which has changed significantly as shown by NASA satellite images. Many fields in the surroundings became unsuitable for crop cultivation due to radiation damage. However, it is these very areas that are driving the region’s green evolution, as they have become home to solar panels. 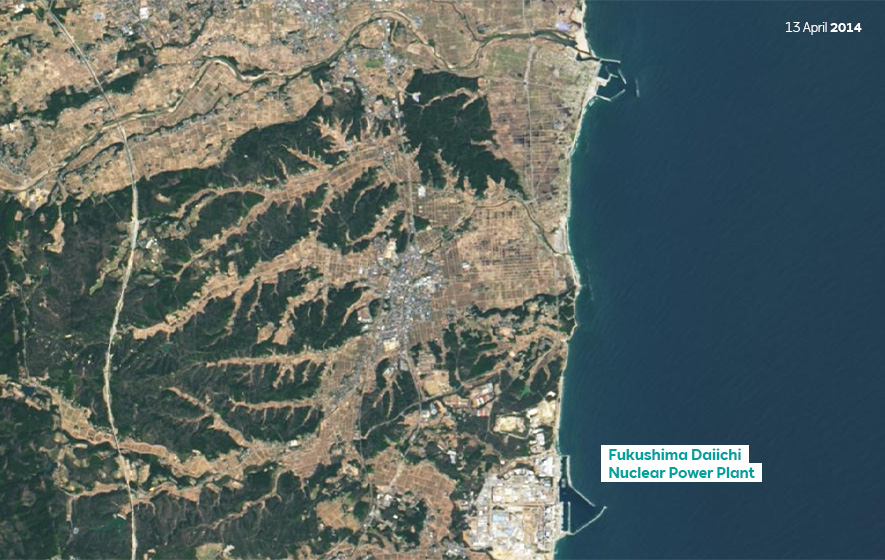 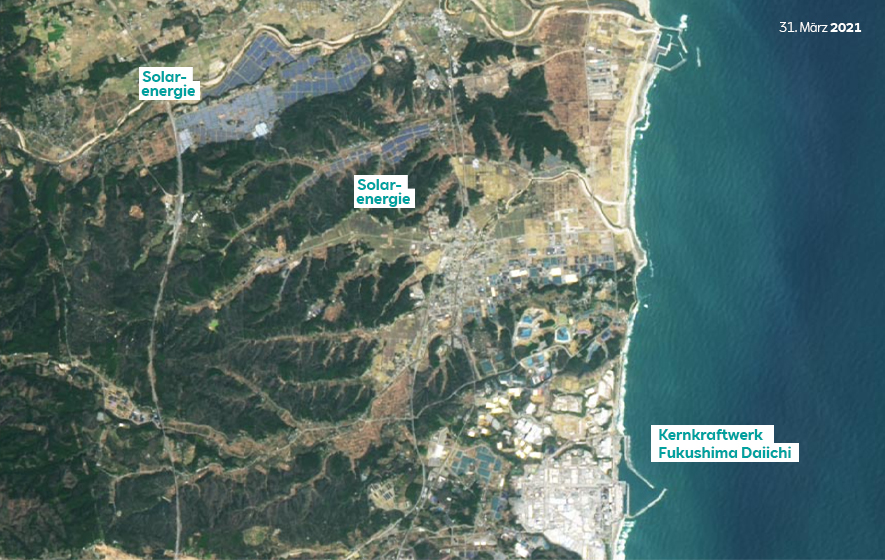 One example is the city of Namie, situated on the coast several kilometres north of the Fukushima Daiichi plant. This was the originally envisaged location of the region’s third nuclear power station, a project that was cancelled in the wake of the reactor catastrophe. The site now features thousands of solar panels. Electricity generated from these farms is used to produce green hydrogen. The Fukushima Research Field (FH2R) has been in operation since 2020 and explores the use and production of green hydrogen. So far, small amounts of this FH2R energy source have been used for the Tokyo Olympics and locally for fuel cell cars. Japan seeks to continue placing its bets on hydrogen.

Land in the city of Tomioka in the vicinity of the Fukushima Daini nuclear power station is also being repurposed for the energy transition. The premises of a former golf course, which was forced to close after the 2011 catastrophe, as well as about 350,000 square metres of farmland now accommodate some 110,000 solar modules with a rated output of 30 megawatts (MW). They have been up and running since 2018 and produced ten percent more energy than originally envisaged in the first year. 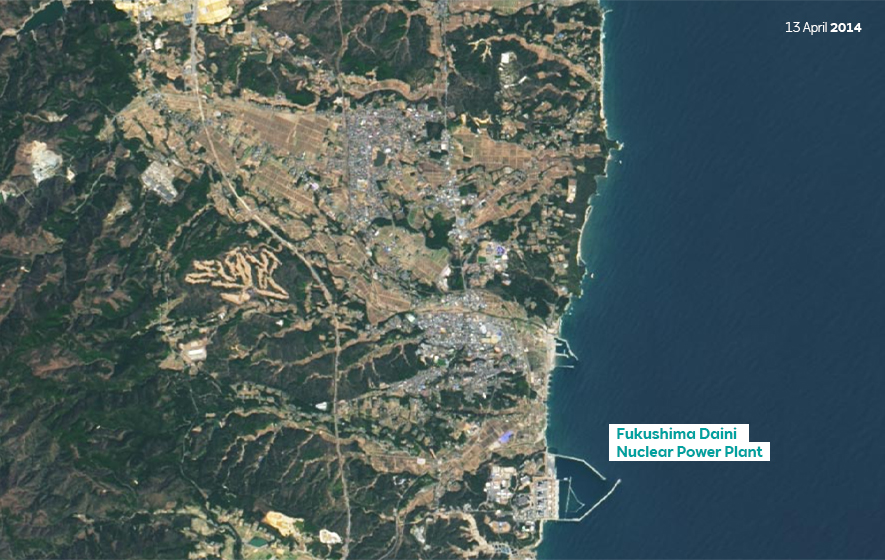 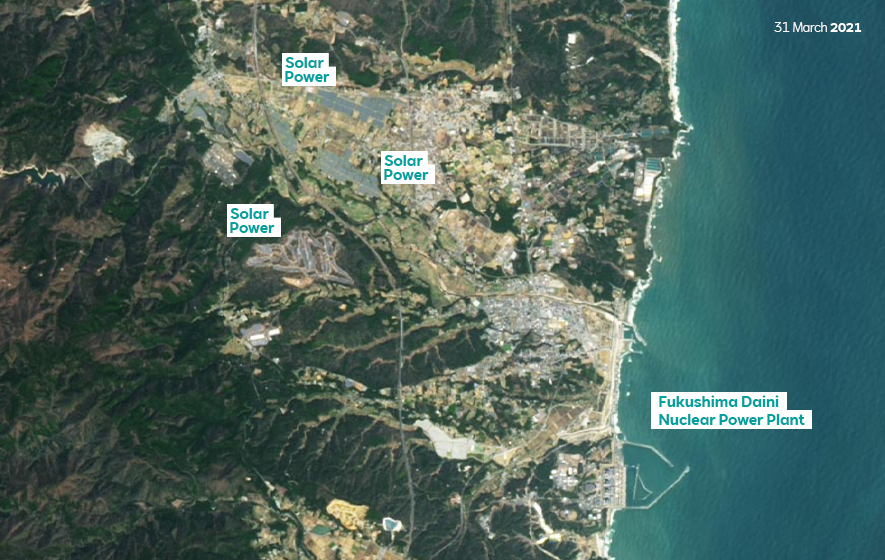 Another project involving the region’s residents can be subsumed under the heading ‘micro-networks’. These assets are built where electricity is generated for self and third-party consumption. A case in point is the village of Katsurao. A large portion of the population abandoned the village between 2011 and 2016, leaving a mere 450 residents behind – less than a third of the original number.

The community is attempting to become largely electricity-autonomous by way of its own solar farm. The village has already succeeded in meeting approximately 40 percent of average energy demand with a 1.2 MW solar farm and a 3 megawatt-hour (MWh) energy storage system. The joint venture is subsidised by the Japanese Ministry of Economics and Industry.

2.75 billion US dollars for renewables through 2024

Plans have much larger installations going forward. A total of eleven new solar farms and ten new wind farms are set to be commissioned on abandoned or contaminated sites by 2024. Aggregate targeted build-out is 600 MW, representing about two-thirds of the capacity of a nuclear reactor.

Electricity generated by these assets is primarily earmarked for Greater Tokyo. An 80-kilometre transmission system connecting Fukushima Prefecture to the metropolis is being planned for this purpose. The project’s estimated costs total approximately 2.75 billion US dollars. The expansion will be financed by state and private backers, including government-owned Development Bank of Japan

Renewables development continues to gain traction in Fukushima. The prefecture is already a pioneer in the expansion of renewable energy in Japan.