The countries of Central America find themselves faced with two challenges. For one, energy demand in Nicaragua, Honduras, Guatemala and co. is rising. This is partly attributable to population growth and economic advances. Then there is the climate-change-induced increase in the number and intensity of hurricanes, heavy rainfall, flooding and droughts.

Paving the way for an infrastructure that ensures security of supply and is not reliant on fossil fuels is all the more important in light of these challenges. This is why the International Renewable Energy Agency (IRENA) has now published a ‘Renewable Energy Roadmap for Central America’, outlining a pathway for the development of a sustainable energy system for the entire region. 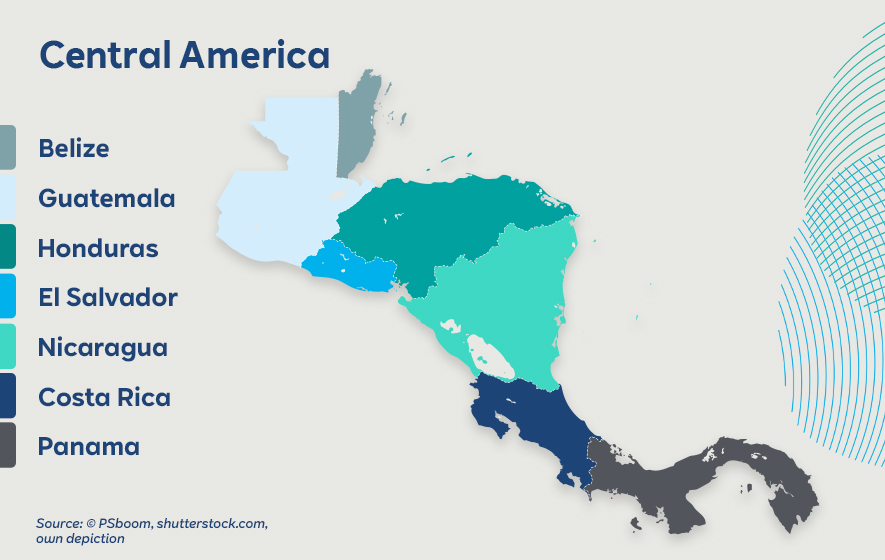 There is ample potential for renewable energy in Central America. And the region is by no means starting the energy transition from scratch – as is also highlighted in the roadmap.  Various national platforms and initiatives have already been launched aimed at delivering a joint sustainable energy system. These include e.g. the Sustainable Energy Strategy 2030 (EES2030) as well as regional projects to support economic fuel use and harness geothermal energy (links in Spanish).

The strategy behind the roadmap – what needs to be addressed?

What’s first on the to-do list for countries looking to build a sustainable energy system? The roadmap references the following main areas of action:

The analysts stress that a timely implementation of the strategy is imperative, as forecasts suggest a significant hike in power consumption by 2050. This projected rise sees Belize, alone, hitting a per capita electricity consumption of 7,000 kilowatt hours (kWh) – a figure that in 2020 was at a mere 2,000.

In order to create an efficient and sustainable energy system as quickly as possible, the roadmap follows a strategy which prioritises decarbonisation – in other words the ‘Decarbonising Energy Scenario’ (DES). This scenario drives electrification in the region to reduce greenhouse gas emissions. The necessary power is generated using renewables.

In this scenario, electricity plays an increasingly integral part in total final energy consumption (TFEC): the share of fossil fuels in TFEC decreases from 50 percent (2018) to 34 percent (2050), while electricity’s share rises from 13 percent to 49 percent by 2050. On the other hand, renewable energy’s share in power generation rises to as much as 97 percent by 2050 – in 2018 it was at 70 percent.

According to the experts, electrification, energy efficiency improvements and reduced reliance on fossil fuels will have a positive impact on total energy consumption in Central America. Although power consumption in 2018 amounted to 1,235 petajoule, they expect this figure to drop to 1,200 petajoule by 2050, i.e. exhibit a downwards trend.

And last but least – what about decarbonisation? If the countries of the region succeed in coming together to implement the roadmap, greenhouse gas emissions could drop significantly by 2050: from over 50 million metric tons of CO2 in 2020 to just 30 million metric tons. This would make for an overall reduction of around 40 percent.