Their target customers are primarily shipping companies looking to harness ammonia to fuel their ships, thereby reducing their greenhouse gas emissions. For, until now, nearly all ships – from ferries to container-carrying giants – have been powered with fossil fuels such as heavy fuel oil and marine diesel oil. And these fuels don’t just produce greenhouse gasses when burned, they also release harmful sulphur and nitrogen oxides in addition to soot particles and dust.

Not only does ammonia turn into steam and nitrogen (N2) when burned carbon-neutrally, it can also be produced sustainably using nitrogen and green hydrogen (H2). To make this happen, the investors are heading to the industrial town of Sauda in southern Norway, where they plan to build an electrolyser capable of producing an average of around 90 metric tons| of H2 per day at 95 percent capacity utilisation and 240 megawatts of input power. According to Hy2Gen, this hydrogen could then – together with ambient nitrogen – be turned into approx. 600 metric tons of sustainable ammonia on a daily basis. The necessary energy is to come from Norway’s sizeable fleet of hydropower plants (Link in German).

At the University of Duisburg-Essen’s Centre for Fuel Technology (ZBT), Jens Wartmann is busy researching ammonia and its role as a fuel source. He is also Head of Strategy and Technology at Campfire, an ammonia consortium where 70 partners from the worlds of business, politics and research have come together to build an ammonia economy, spanning production, distribution and application. One area of focus is the potential to use ammonia as a marine fuel.

The most sophisticated and cost-effective way to power a ship with ammonia, says Wartmann, is to use a conventional four-stroke engine, which only calls for ten percent of the ammonia (NH3) to be ‘cracked’, i.e. decomposed to produce H2 and N2. This process produces water vapour and nitrogen – with air already comprising 80 percent nitrogen. Although burning the remaining ammonia releases climate-relevant laughing gas and other harmful nitrogen oxides (NOX), Wartmann explains: “They can largely be rendered harmless by catalytic converters.”

To reach even lower emission levels, the ammonia would need to be fully decomposed ahead of combustion. The nitrogen would then be emitted into the atmosphere before the hydrogen was used. Pure H2 could also be used to power low-temperature (PEM) fuel cells such as those found in cars and trucks. “These cells have a significant energy density, are versatile in their application and have very long service lives when powered with pure hydrogen,” says Wartmann. Then there would be no nitrogen oxide emissions at all.

A third option are high-temperature fuel cells (SOFC). They, too, are highly efficient, and can run on pure ammonia without the risk of producing laughing gas or NOX, says Wartmann.

Viking Energy, one of Norwegian shipping company Eidesvik’s supply vessels, is to be fitted with a high-temperature fuel cell for ammonia operation by 2023. 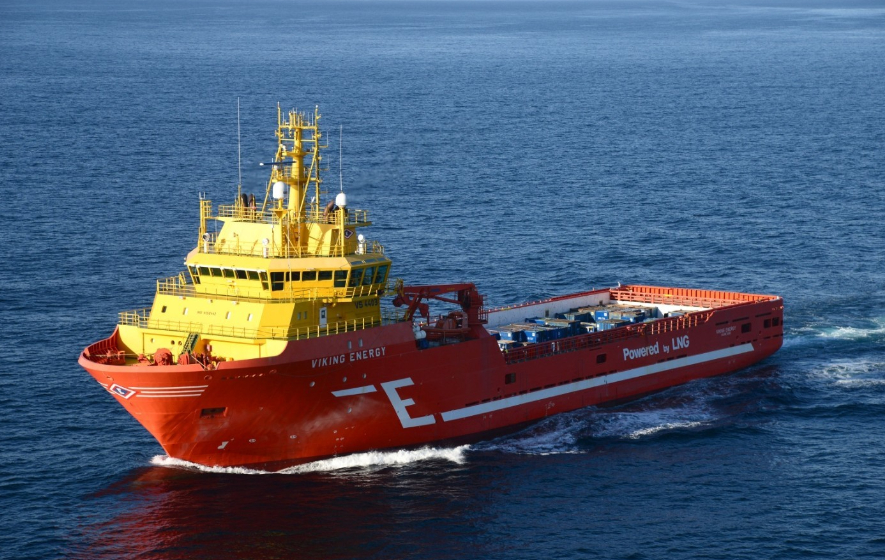 Viking Energy, one of Norwegian shipping company Eidesvik’s supply vessels, is to be fitted with a high-temperature fuel cell for ammonia operation by 2023.

Wartmann sees them mainly being used to generate base-load electricity. In the maritime sector, they would be suitable for cruise ships that still consume a lot of power even when in port, or for bulk carriers with short layovers before setting sail for longer periods. Research consortium ShipFC has selected a supply ship from Norway’s Eidesvik, Viking Energy, as the first ship in the world to be fitted with this ammonia propulsion system. According to the company’s own statements, Japanese shipping firm NYK is also working towards using ammonia as a ship fuel.

Why not use hydrogen right away?

NYK also want to operate commercial ammonia tankers. Many consider ammonia to be more than just an alternative marine fuel, namely a cheaper alternative when storing and transporting hydrogen over longer periods and distances. One proponent of this approach is Wartmann’s colleague and Chair of Energy Technology at Duisburg, Florian Nigbur: “We don’t consider ammonia to be a hydrogen competitor, but an energy-efficient hydrogen storage tool.” Ammonia is easier and more cost-effective to transport by ship than hydrogen itself.

The ammonia plant is to be built in Sauda, an industrial town in southern Norway 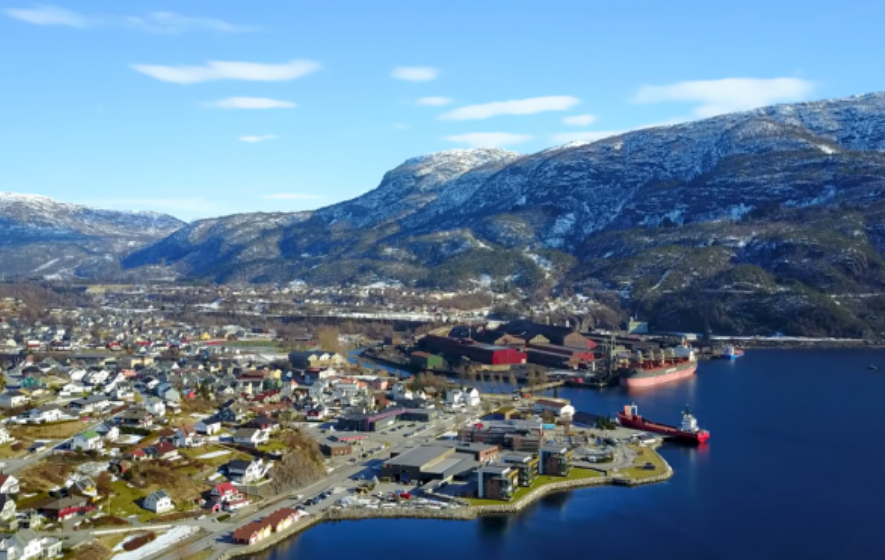 The ammonia plant is to be built in Sauda, an industrial town in southern Norway

Around 92 percent of the energy required to generate green ammonia is needed to electrolyse the hydrogen alone. Only eight percent of the energy is then needed to subsequently produce the ammonia itself. However, according to Nigbur, ammonia easily makes up for this energy disadvantage when it comes to storage, which is far more energy intensive for hydrogen. In addition, liquid hydrogen tanks lose up to three percent of the stored energy every day through evaporation.

“The longer the transport route and storage time, the higher the pay-off when storing hydrogen as ammonia,” explains Nigbur. No wonder, then, that several desert nations are looking into ammonia technologies to export hydrogen produced from solar energy.

Ammonia turns liquid at a temperature of -33 degrees Celsius at standard pressure or at room temperature at eight bar pressure. This means it can safely be transported in metal tanks or pipelines with minimal losses and modest energy input needed.

Hydrogen, on the other hand, only liquefies at -253 degrees Celsius. This, alone, requires an energy input equivalent to 25 to 40 percent of the energy stored in the liquefied hydrogen itself. Not to forget boil-off losses that amount to up to three percent a day.

Alternatively, it can be compressed. A tank pressure of 700 bar in standard for cars. However, this exacerbates another disadvantage of pure hydrogen: liquid hydrogen contains 2.4 kilowatt hours (kWh) of energy per litre (l). At a pressure of 700 bar its energy density is 1.3 kW/l. This only delivers around one tenth of the energy contained in fossil fuels. Liquid ammonia, on the other hand, at least offers 3.3 kWh/l.

In terms of transport, this means that if a specific amount of H2 calls for, say, four tankers, then the same amount of hydrogen bound in ammonia would only need three ships of the same size.

Although the storage technology is much simpler, ammonia is significantly heavier than pure hydrogen due to the additional nitrogen. “However, this literally does not carry as much weight, because the complex technology needed for hydrogen ships, firstly, weighs a lot too and, secondly, makes the ships more than four times as expensive in comparison to ammonia tankers,” says Jens Wartmann.

Neither gas is without its respective risks: hydrogen is explosive, ammonia toxic. These factors could have an impact on public acceptance of pipelines, for example. However, these dangers are well-documented and are, thus, considered to be easily manageable. And ammonia is by no means a novelty: with 200 million metric tons of the pungent gas produced globally every year, it is already the most commonly-produced chemical in the world – second only to sulphuric acid. Until now, it has mainly been produced as a nitrogen source for fertilisers.