This process can be reversed in a mere ten minutes. This involves the turbines pumping water from the lower basin ‘Emosson’ back up to the upper dammed lake ‘Vieux Emosson’. It’s capacity is good for 20 hours of operation under full load. During this period, Nant de Drance produces 900 MW of electricity, equalling the output of a nuclear reactor or a modern coal power plant unit. 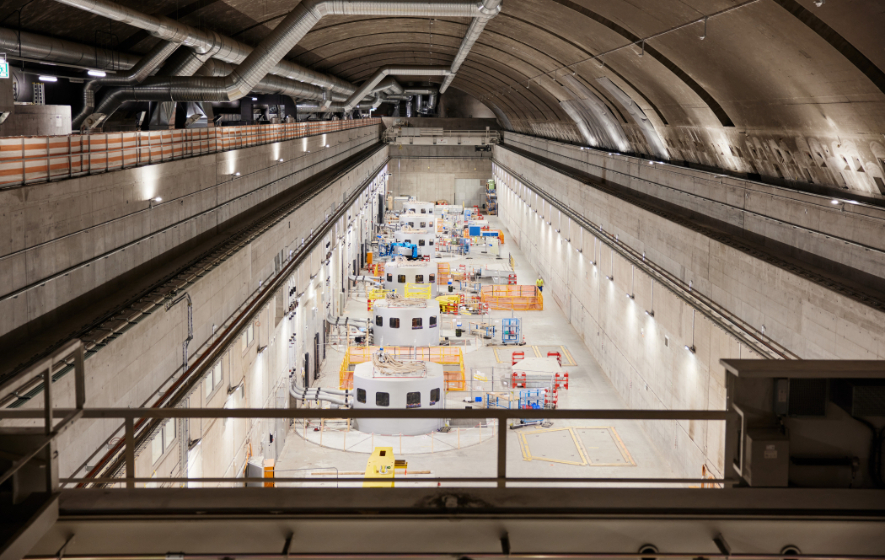 Nant de Drance’s six turbines are in the final test phase according to the namesake operating company, with the pumped storage power station scheduled for commissioning in mid-2022. Its flexible storage and generation capacity should be a further building block for ensuring security of supply from renewables – not just in Switzerland, but in German and other neighbouring EU member states as well.

For decades, hydroelectric power has played a major role in the Alpine republic, and, based on data from the Swiss Office of Energy, in 2020 it accounted for 58 percent of the country’s electricity production. Including imports, a large portion of which is also hydroelectric and mainly comes from France, Norway, Finland and Slovenia, hydropower actually met two-thirds of demand in Switzerland.

However, the potential is far from being exhausted – both in relation to hydropower in Switzerland and foreign trade with electricity. They are tightly intertwined and will both become even more important in the foreseeable future.

After all, about a third of all electricity comes from nuclear power, the demise of which is already certain in Switzerland as well. The country’s three stations may run for as long as they are deemed safe. However, the Swiss Upper House and Parliament have ruled that they may not be replaced.

Switzerland’s policymakers are also aware of the importance of the expansion of renewable energy. At the beginning of February, the country’s government proposed a law designed to make the build-out of photovoltaic technology more attractive by means of tax benefits while accelerating approval procedures for major hydro and wind energy projects.

The Swiss Water Industry Association feels that this is a matter of urgency: “The imminent supply shortage in the winter can only be eliminated if the identified potential for additional hydro storage systems is tapped by the 2040 deadline,“ the Association told en:former.

Swiss ETH Zurich hydraulic engineering professor Robert Boes agrees: “Many projects only try to increase the storage potential of existing dammed lakes by raising the retaining wall.“ He adds that, compared to building a new mountain dam, this amounts to a manageable intervention into nature, and requires a fairly small investment. “But it can easily take 15 years to obtain a permit even for this type of undertaking,“ states Boes: “This makes it impossible to react to growing demand in an appropriate manner.“ 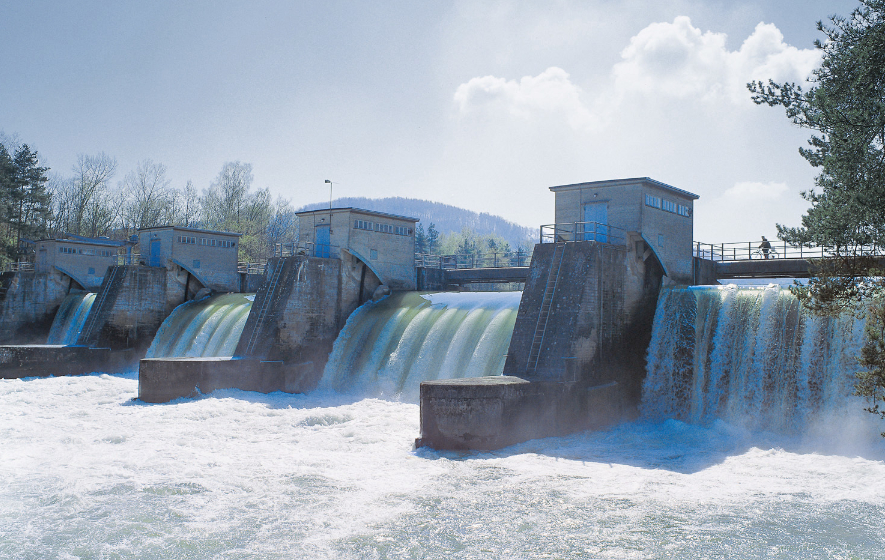 Robert Boes is coordinating a study on hydropower generation and storage potential in Switzerland. The Hydropower Roundtable is pushing for the expansion of hydroelectric power stations’ seasonal storage capacity by 2 TWh by 2040. Representatives of environmental associations, affected sectors and the cantons have agreed on 15 specific projects in a joint declaration. This would increase seasonal storage capacity in Switzerland by over 20 percent to some 11 TWh. By way of comparison, power usage in Switzerland totalled approximately 55 TWh in 2020.

Switzerland’s main objective when enlarging storage volume is to reduce dependency on electricity imports after phasing out nuclear power. Except for very dry years, the country has mostly been a net exporter of electricity on a full year basis. But according to the Water Industry Association, production can be up to 20 percent above or below the average.

During the winter, however, Switzerland often imports electricity from its neighbours to meet demand, because hydropower is also subject to substantial seasonal fluctuations.

The spring sees the power stations running at full pelt. Melting snow and copious precipitation provide enough water to fill both reservoirs at the same time. The stores are full when melt water decreases towards the mid-year point. Melt water stops trickling down from the glaciers in the autumn, which is when precipitation from snow increases, causing the levels of flowing bodies of water – and in turn output from run-of-river power stations – to drop considerably. Larger stores could distribute the energy more evenly over the year. Located above natural lakes, man-made water reservoirs already have a substantial impact on the water volumes of rivers and, in turn, production from run-of-river power plants. Says Boes, “You could say that dammed up lakes play the role of natural reservoir, which diminishes as glaciers melt.”

Switzerland as storage and transit country

Moreover, pumped storage power stations fulfil yet another task, which goes beyond the Swiss power grid. They already run on foreign electricity whenever neighbouring countries have a surplus, with Germany leading the way. On demand, Swiss pumped storage power plants transmit this electricity back across the border, albeit not necessarily to its country of origin.

This is but one reason why Switzerland is a veritable transit country for electricity. Germany, for one, exports large quantities of electricity directly to Italy. According to a study by the Swiss Office of Energy, up to 30 percent of electricity traded between Germany and France flows through Switzerland.

Playing this role enables the Alpine republic to generate approximately 60 terawatt hours (TWh) of foreign trade, which roughly equals the country’s entire electricity consumption. This compares to just over 93 TWh of electricity imports and exports in Germany in 2020, less than 20 percent of domestic usage (488 TWh).

The expansion of wind and solar power, both intermittent sources of energy, could make Switzerland’s hydro storage units even more important for the entire European power grid. Operators of major pumped storage power stations are banking on demand for such systems. According to Nant de Drance management, thanks to the plant’s flexibility and performance, it is predestined for facilitating and supporting the energy transition in EU countries as well.

Outputting 33 GWh and 1,000 MW, the upper and lower reservoirs of the Linth-Limmern pumped storage power station in the Canton of Glarus make it the largest of its kind in Switzerland. 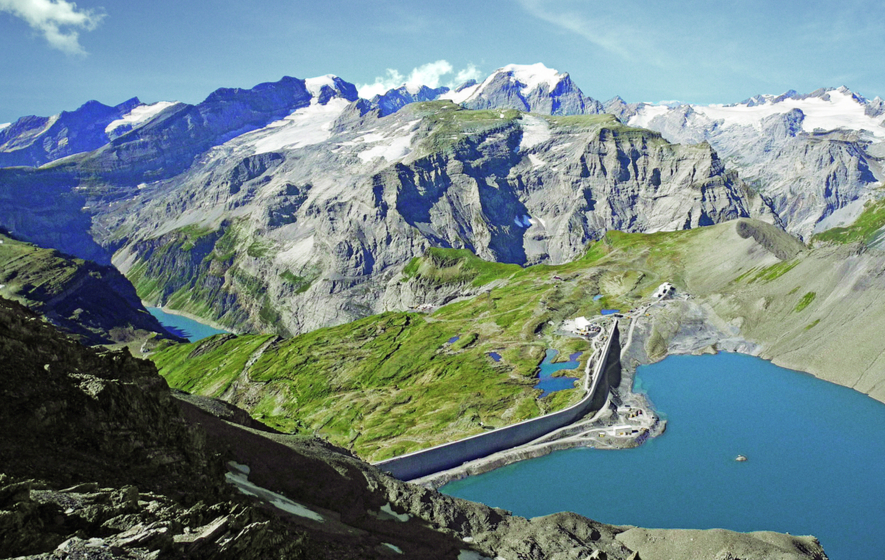 Outputting 33 GWh and 1,000 MW, the upper and lower reservoirs of the Linth-Limmern pumped storage power station in the Canton of Glarus make it the largest of its kind in Switzerland.

The problem is that Swiss power stations only have limited access to the EU’s attractive electricity market. This forces them to forgo the high prices paid there whenever load spikes occur during wind lulls and cloud cover.

Electricity agreement would help many stakeholders

Negotiations around a power accord between Switzerland and the EU are on hold. An agreement would offer operators and other market participants better marketing opportunities. Swiss electricity storage systems could draw on their flexible offerings to help reduce spot and balancing power prices in EU member states while increasing security of supply.

2021 was a record year for corporate PPAs Read more

Another stakeholder group standing to benefit from such an accord are Swiss consumers as – similar to the renewable energy surcharge in Germany – the country subsidises levies on retail prices. Owners of operating companies – usually energy utilities – can apply for the subsidy if they have to sell hydroelectric power below cost on the market. According to the Swiss Office of Energy this applied to nearly one in two kilowatt hours of electricity generated from hydropower in the country.