The German government has its sights firmly set on the country diversifying its gas sourcing in order to reduce imports from Russia. However, alternatives are scant. Therefore, the federal administration announced that it would support construction of sites at which liquefied natural gas (LNG) can be unloaded. Such systems can receive LNG from ships, return it to its gaseous state, and feed it into the German gas grid.

Following the announcement, several consortia returned to pursuing the plans to build LNG terminals they had shelved and started looking for an interim solution. One thing is for certain thus far: If everything develops as envisaged, LNG tankers will start supplying Germany with natural gas purchased overseas in the winter of 2022 and 2023.

Floating terminals ready for use in the winter

The German administration commissioned energy companies RWE and Uniper to charter special ships capable of feeding gas directly into the grid. Referred to as Floating Storage and Regasification Units (FSRUs), these LNG tankers are equipped with an on-board regasification unit.

This is how a floating LNG terminal (FSRU) works. 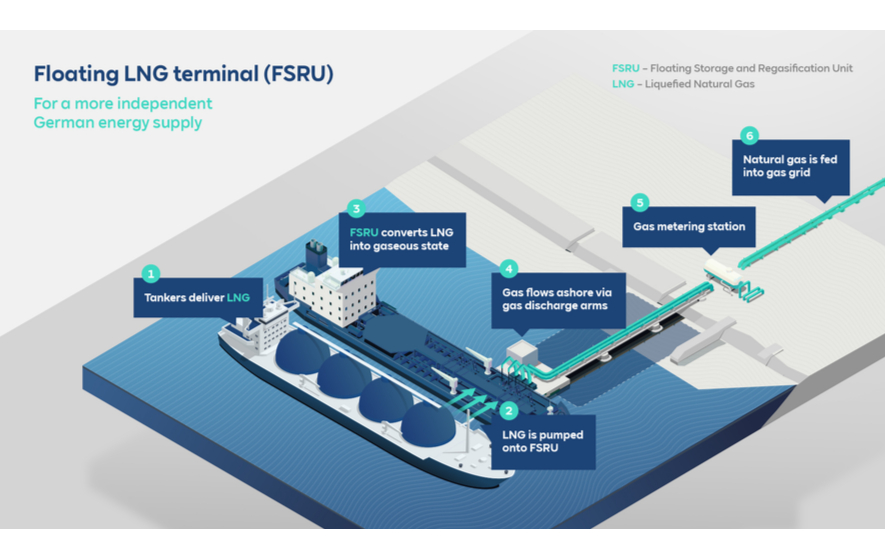 This is how a floating LNG terminal (FSRU) works.

According to Christian Breuel, who is in charge of the tanker business of Hamburg-based shipping company Bernhard Schulte, this type of ship can be connected to the gas grid via a short pipeline without great effort. He goes on to say, “All you need is a protected harbour with enough room to accommodate a large ship permanently while allowing for a second tanker to be moored alongside it for a limited period of time.” Breuel further explains that this enables conventional LNG tankers to fill the FSRUs with liquefied gas over and over again as the FSRUs convert it to natural gas uninterrupted. In addition, he has identified conditions conducive to this at precisely the locations where LNG terminals have been planned: Wilhelmshaven, Stade and Brunsbüttel, with Rostock also being a conceivable site.

In early May, RWE and Uniper announced that they succeeded in chartering two FSRUs each. Boasting a length of roughly 300 metres, the ships are able to regasify between 5 and 7.5 billion cubic metres of gas and feed it into the gas grid every year. By comparison, a stationary onshore LNG terminal is capable of processing between 8 and 10 billion cubic metres. Altogether, the four ships could well cover nearly 30 percent of Germany’s demand for gas, replacing over half of current imports from Russia.

Esperanza is the first available ship of the four. It was chartered for the government by RWE, but will be operated by Uniper in Wilhelmshaven. This is because the location is currently considered to have the best prerequisites for ensuring a fast grid connection. As a result, German consumers might start receiving LNG-derived gas from as early as the beginning of 2023.

In addition to the technical prerequisites, however, rules must also be put in place. The Federal Cabinet adopted the German LNG Acceleration Act. Its objective is to considerably simplify and speed up the construction of terminals designed for liquefied natural gas. Thomas Hüwener, Managing Director of gas transmission system operator OGE, clearly outlined just how challenging the undertaking is for all stakeholders. To connect the FSRUs to the gas grid by the winter, customary planning processes will have to be implemented ten times more swiftly than before.

Stationary LNG terminals are to handle putting LNG on the system in the medium run. In mid-March, the German government, Dutch state-owned Gasunie, and RWE signed a letter of intent to build an LNG terminal in Brunsbüttel, which is located at the Elb estuary. The parties agreed that the government would cover half of the costs, which total about one billion euros. RWE already secured a large part of the future regasification capacities in 2018. This was followed in March 2022 by a memorandum of understanding with Shell, pursuant to which the British-Dutch oil and gas group “will reserve a substantial portion of the capacity in Brunsbüttel to import LNG over the long term.”

Additional investors are now seeking to build LNG terminals in Stade, upriver on the Elb. Uniper has announced that it will implement a permanent solution for unloading LNG in Wilhelmshaven. All told, plans envisage annual feed-in capacity of approximately 45 billion cubic metres (Brunsbüttel: 8, Wilhelmshaven: 25, Stade: 12). The investors say that they are ready to go as soon as the required approvals have been obtained. This means that LNG shipments could start being unloaded via the stationary terminal in Wilhelmshaven from 2025 onwards.

Although gas is considered a bridge technology in the energy transition, Frank Graf, Head of the Gas Engineering Department at the Research Centre of the German Gas and Water Association at the Karlsruhe Institute of Technology (KIT), believes that these facilities can indeed be turned into long-term investments. One reason is that the terminals could perhaps process green LNG as well. This commodity can consist of liquefied methane from biogas plants or natural gas synthetically produced from renewable energy.

Some operators also have their sights set on hydrogen: “You can design the terminals to enable repurposing for ammonia at a later stage, requiring just a few components to be swapped out.” Ammonia is a stable compound consisting of nitrogen and hydrogen, in which hydrogen can be transported over long distances at lower cost than in its pure state.

RWE actually plans to set up an ammonia unloading plant at the Brunsbüttel site while building the LNG terminal. The unit should be capable of receiving an annual 300,000 metric tons of green ammonia starting in 2026. The company envisages expanding the plant by adding a cracker capable of separating the hydrogen from the ammonia and feeding the hydrogen into a projected pipeline. Capacity is to be increased to two million metric tons of ammonia thereafter, enough to retain approximately 360,000 metric tons of green hydrogen.

Major LNG deliveries are also expected to come from the Gulf region, given that German Economics Minister Robert Habeck has initiated an energy partnership with Qatar. Norway has also pledged to increase LNG supplies to Germany.

Is ammonia the future of shipping? Read more
Gas still important for the transformation to climate neutrality Read more

Stabilizing the grid: 423 battery racks in 47 overseas containers can store up to 117 megawatts of electricity
Read more
More about Energy policy Energy trade Security of supply