A team of researchers from the Technical University of Dresden (TU Dresden) has constructed a flywheel energy storage system (FESS) with a capacity of 500 kilowatt hours (kWh) and an output of 500 kilowatts (kW). According to the builder, this makes the TU Dresden FESS five times larger than a customary rotation kinetic system (RKS). Says Thomas Breitenbach, the project’s director, “Our goal was to develop an energy storage unit that can be set up beside a wind turbine. This required the system to meet entirely new standards and us to push the performance envelope.”

Known technology in a new dimension

The technology is based on a tried-and-tested principle: during the charging process, electric motors put flywheels into rotation, and during discharge, the motors operate as generators to produce electricity. This is done by using the stored rotational energy acting as a brake on the flywheels.

Drivers of electric vehicles with braking energy recovery systems are familiar with the principle, or at least the impact it has in practice: Here, too, the electric motor is repurposed to a generator under braking in order to produce electricity and give the battery a partial charge. The energy needed to do so comes from the momentum of the travelling car.

The advantages of stationary flywheel energy storage systems are longevity and high efficiency, as some 95 percent of the stored energy can quickly be recovered. Losses incurred are mainly due to friction. To minimise mechanical resistance, the flywheels are usually operated in vacuum, which, however, cannot keep unused energy from discharging fairly quickly.

This is why FESSes cannot be used for long-term energy storage. They are all the more suitable for providing short-term ride-through power to offset fluctuating grid frequency lightning-fast.

No replacement for eliminated large-scale turbines

Such frequency fluctuations are absolutely normal. They can stem from major power user patterns, for instance when an industrial plant ramps a production facility up or down or a stadium operator switches the floodlights on or off. However, they also arise in wind and solar farms whenever the wind picks up or dies down or the sun is covered by clouds.

FESSes are the perfect solution when it comes to rapidly compensating for such fluctuations to give larger and more inert storage systems the reaction time they need, as a FESS can be charged and discharged within fractions of a second. To date, a large portion of the rotational mass required to keep a power grid stable consists of the revolving parts of the turbine systems of conventional power stations.

But Breitenbach’s team has a different focus. The FESS of TU Dresden is to be used in tandem with wind turbines. The flywheels accelerate as soon as the connected turbine generates electricity. “The storage is full once rotation reaches nominal speed,” explains Breitenbach. Current data show that the flywheels would continue to turn for almost a full day without power. “However, the nominal speed can be maintained on a very small amount of power,” Breitenbach adds.

As soon as the wind turbine reduces output due to slower winds, the FESS takes over and discharges the stored energy into the grid as electricity, with a view to keeping feed-in as constant as possible. Once the wind picks up again and acccelerates the rotors of the wind turbine, the flwheels are brought back up to nominal speed.

Current technology would allow an existing FESS to buffer such production-side flucutations from wind turbines, but this is not economically feasible, as according to Breitenbach, it would require a large number of small units to be installed. And this is precisely what his team intends to change with its mammoth FESS.

This is what the RKS looks like from the inside. 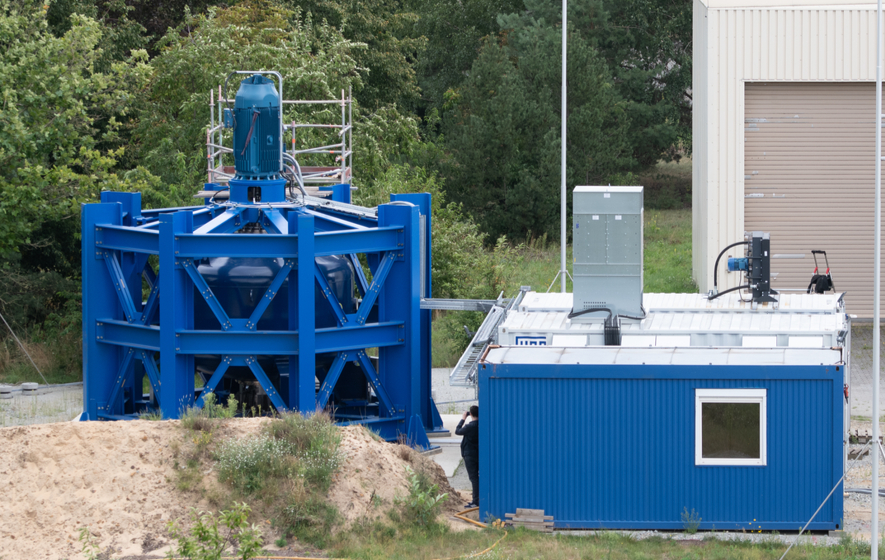 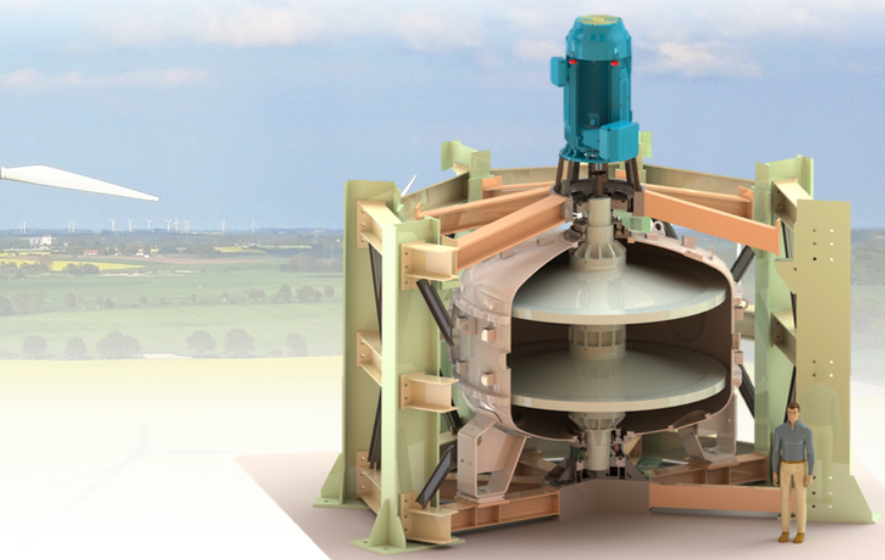 This is what the RKS looks like from the inside.

Rotation mass energy storage as part of the circular economy

Breitenbach cites flywheel design as one of the challenges. He told en:former that increases in size translate into increases in the centrifugal forces created by rotation. Each of the two flywheels of the Dresden demonstration facility weighs 20 metric tons. Many FESSes – in particular small ones – use rotors made of fairly light fibre composites. This means they have to turn faster to achieve the desired storage capacity.

Breitenbach explains that his team deliberately opted against that, because composites are fairly difficult to recycle: “We chose a material that can be easily and fully recycled in line with the circular economy: a special steel alloy capable of withstanding significant shear forces.”

He cautions that, however, it is too early to predict whether it will actually pay off for power producers to equip their wind turbines with such an FESS. Breitenbach declares, “This is what we will be exploring over the next three years in the follow-up project that we launched in October 2021.”

Stabilizing the grid: 423 battery racks in 47 overseas containers can store up to 128 megawatt hours
Read more
More about Energy storage Research and Development Security of supply