Renewable energy is undergoing strong expansion around the globe. According to the International Renewable Energy Agency IRENA, the capacity of plants to generate electricity from wind, hydro and solar energy rose by 260 gigawatts (GW) in 2020 – hitting an all-time high. And experts predict expansion picking up even more in the next few years. The market thus offers very good prospects to investors. London-based data and information services company IHS Markit recently identified the regions holding the most appeal for investors.

This involved analysts comparing the attractiveness to investors of 35 markets which are likely to account for 90 percent of solar, onshore and offshore wind build-out through to 2030. Seven categories were considered in the assessment, including the current political environment, infrastructure, earnings risks, and expected returns. The Global Renewable Market Attractiveness Rankings provide a general overview as well as classifications for each technology. 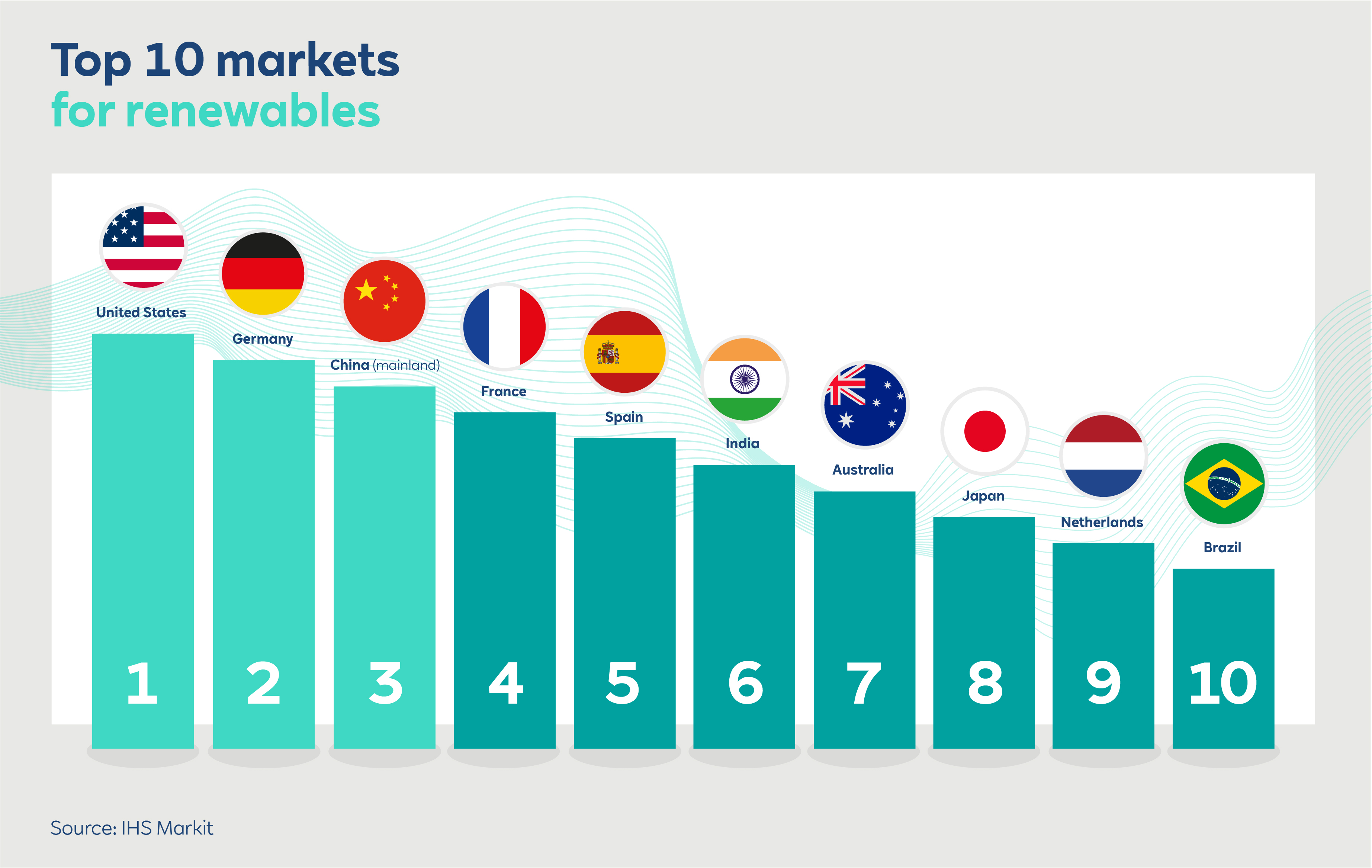 Overall, the USA ranks first, followed by Germany and Mainland China. Last year, more than half of worldwide build-out took place in China, but difficult access to that market meant the country barely made the podium. France and Spain trail in fourth and fifth place. The experts highlight these countries’ strong market foundations, stable procurement mechanisms, and long-term goals regarding the energy transition. They find that India has very ambitious plans and offers attractive subsidies. This puts the South Asian nation in sixth spot, followed by Australia, Japan, and the Netherlands.

In two categories, the United States is top notch of the technology rankings as well. The nation offers the most attractive conditions for investors in onshore wind farms and PV systems. Those seeking to spend capital on wind turbines on the mainland can also benefit from promising markets in Spain, France and Australia. Ground-mounted solar panel arrays are a promising investment in Mainland China, India, Spain, and Australia. 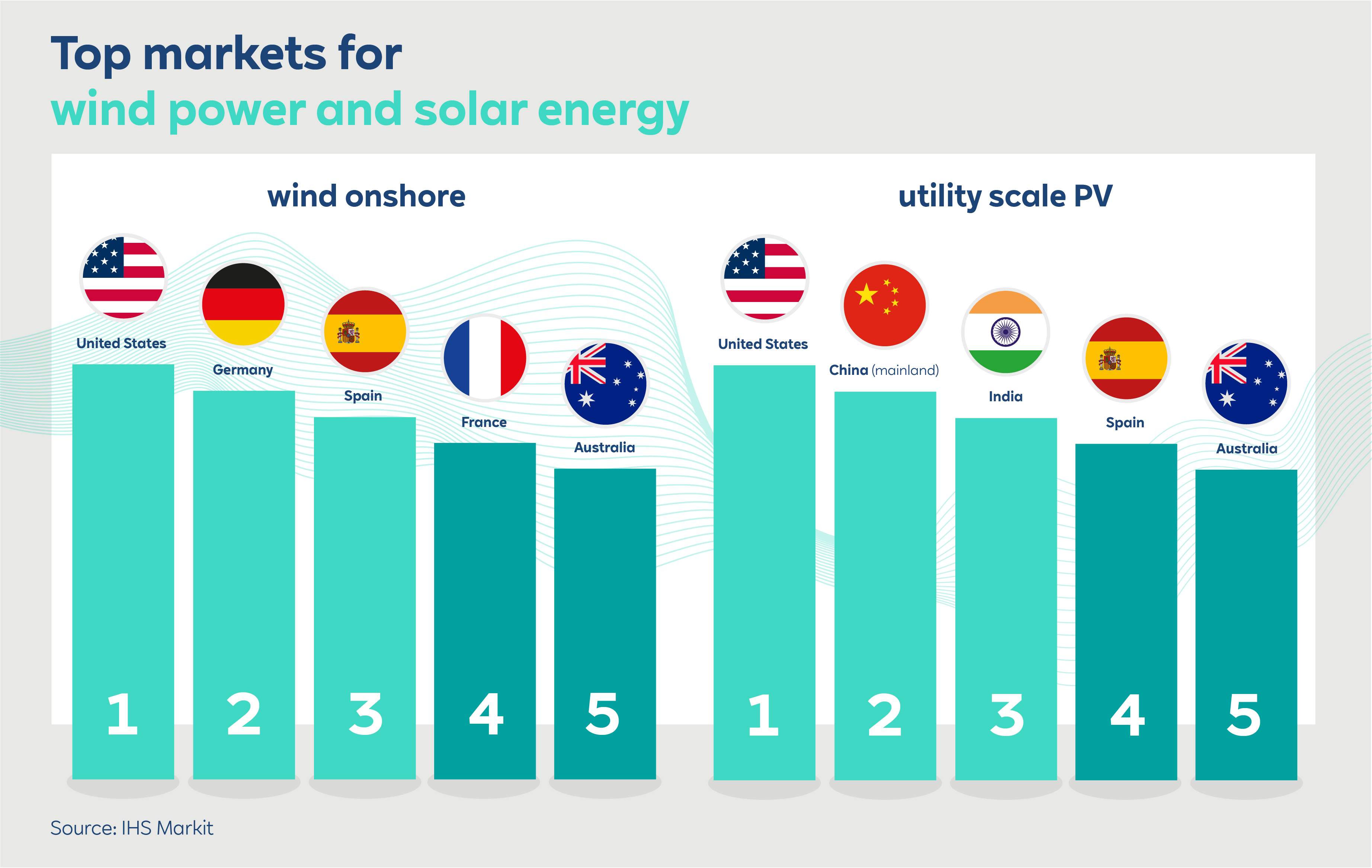 Owing to fairly scant subsidisation of onshore wind and solar farm development, the United Kingdom just missed out on the top ten of the general order of merit. In turn, the UK’s ambitious offshore wind expansion plans put the nation atop the rankings in this category. Second to fifth spot are occupied by Germany, the Netherlands, the USA and France. All these countries have lofty expansion undertakings and envisage setting up gigawatt-class wind farms in their coastal waters.

Solar boom in the US Read more

The authors comment their assessment by pointing out that come countries still have a longer road to carbon-neutral electricity production than others. Absence of grid and land access for India’s onshore wind power build-out is cited by way of example, as is Australia’s challenge of reconciling the variety of ambitions at the federal and state levels.

Nevertheless, the analysts see enormous potential on the renewables market: “Onshore wind, offshore wind and solar PV are set to account for over 80% of all new power generation capacity additions globally to 2030. While the lion’s share of 2020 capacity additions came from just two markets—China and the United States—close to 50 markets recorded double digit growth in the past year,” summarises Eduard Sala de Vedruna, Executive Director, Global Clean Energy Technology and Renewables at IHS Markit.