A solar obligation for new build and existing public buildings together with measures to streamline the construction of solar farms in Alpine areas plus a standardised feed-in tariff. These are the key cornerstones of an amendment to Switzerland’s Energy Act, which came into force in October 2022. The revision forms part of a ‘solar offensive’, which the country hopes will drive solar thermal power and, above all, photovoltaics usage.

New expansion targets have also been introduced: the Council of States, i.e. the parliamentary body representing the cantons, has set its sights on renewables contributing no less than 45 terawatt hours from 2050 onwards – not including hydropower. The National Council, the lower house of parliament, is yet to approve these ambitions. As it stands, hydropower is by far the biggest contributor to the Swiss power mix. Run-of-river and hydro storage power plants produce around 40 terawatt hours of electricity annually, thereby accounting for 68 percent of all energy used in 2021. It is now time for the remaining renewable energy sources, currently accountable for approximately 10 percent of consumption, to play catch-up. And solar power is first in line.

To hit this target, Switzerland has become one of the first countries in the world to make the installation of PV systems or solar thermal systems on rooftops and façades mandatory. Until now, this was only the case in a small number of German states, although the EU and the UK are currently debating introducing similar regulations.

Who is affected by Switzerland’s solar obligation?

In Switzerland, the solar obligation currently applies to the construction of new buildings with an effective area of over 300 square metres – which in this context corresponds to the footprint of the building. Smaller or existing buildings are not covered by the law, unless the federal government deems them to be a ‘suitable infrastructure surface’ – a caveat that will allow noise barriers, façades and roofs owned by the government to also be equipped with solar solutions by 2030.

Although the individual cantons are entitled to approve exemptions from the solar obligation – e.g. in cases where it is deemed to be economically disproportionate – they can also enforce stricter rules. In the canton of Zurich, for example, owners of certain established buildings could soon be obliged to install solar systems on roofs or façades. In the canton of Bern, on the other hand, parliament is supporting an initiative to make photovoltaic systems on the roofs of large car parks compulsory. According to estimates, the amount of energy this measure alone could potentially generate would amount to 0.5 terawatt hours per year (TWh/a) – i.e. around 7.5 per cent of the canton’s entire current electricity demand.

Predictable tariffs as a PV sweetener

To incentivise the Swiss to voluntarily equip their buildings with photovoltaics, there will be a more standardised feed-in remuneration system that will apply nationwide. Recently, the utility Centralschweizerische Kraftwerke (CWK) turned heads on the solar power market by offering 32 centimes per kilowatt hour (kWh) instead of the usual seven. The national industry association welcomed the move, but also called for more predictable tariffs: “We appreciate the CHC’s offer, but it is based on the market price and can drop again at a moment’s notice,” said David Stickelberger, Managing Director of Swissolar, the Swiss trade association for solar energy.

A price corridor is being discussed with a lower limit based on the average amortisation rate of a plant and an upper limit that is twice as high. Swissolar is calling for long-term remuneration ranging between ten and 20 centimes.

Security of supply with solar power in winter?

The concept of bridging the winter months with solar power, of all things, may come as a surprise. After all, solar radiation is weaker in winter than in summer, even in the mountains. But in the loftier heights of the Alps, i.e. 1,500 metres above sea level and higher, this law of nature can be manipulated to some degree by mounting the solar cells at an extremely steep angle. This allows them to also pick up the sun’s rays reflected by the snow. “The maximum output is achieved when they are positioned at 70 to 90 degrees, facing south,” Jan Remund tells en:former, having researched this for a report commissioned by Swissolar. “In summer, this incidence angle then becomes less favourable and in autumn there is no snow.”

Although the annual output of such a system could be around 20 percent lower than an installation positioned at 35 degrees, Remund explains that this calculation doesn’t take snow into account, which reduces output of the flatter modules by covering them. As it slides off the steeper positioned ones, feed-in remains much more constant over the year, with peak output occurring between January and May. 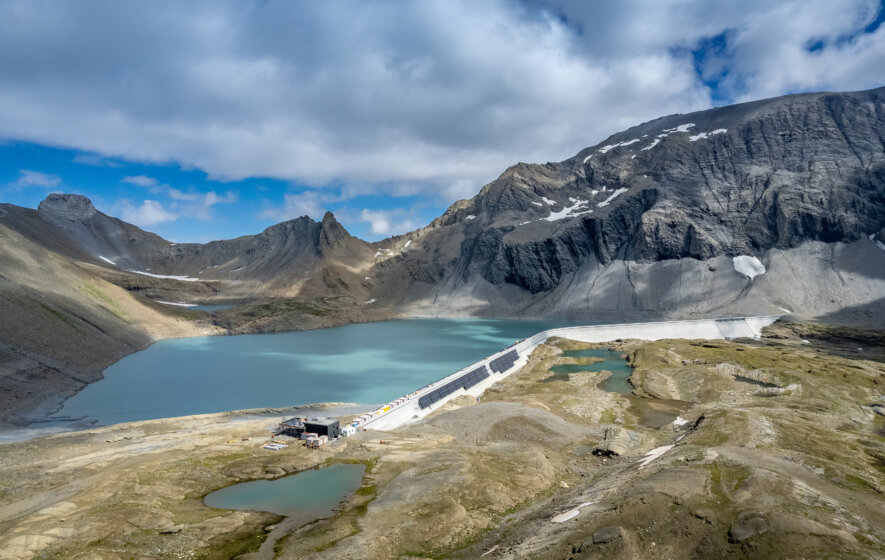 Electricity producers see the appeal. Axpo AG, the largest producer of renewable energy in Switzerland, for example, has installed photovoltaic systems with a peak output of 2.2 megawatts (MW) at 2,500 metres on the Muttsee dam (see article picture). According to the company, similar projects have already been identified, including a 10-MW ground-mounted system at 2,000 metres on the Nalps reservoir.

In future, investors should have an easier time pursuing projects such as these. The latest amendment removes some of the bureaucratic hoops companies have to jump through when constructing large-scale photovoltaic power stations with annual outputs of at least ten gigawatt hours (10GWh/a) and winter outputs of at least 0.5 kWh per kilowatt (kW) of installed capacity. The latter is only likely to be possible for Alpine plants.

Switzerland as an electricity importer in winter

Increasing power production in the winter months is a priority for Switzerland. Generating electricity from solar sources in winter should not only act as a counterbalance to the solar plants on the Swiss Plateau, which offer peak volumes over the summer months. It also complements hydropower. Because although run-of-river power plants may be reliable, their output drops from autumn onwards when the rivers carry less water. In the first months of the year, reservoir lake reserves are also in short supply. It is not until the snow melts in spring that the availability of hydropower recovers.

Electricity supply in winter is also one of Switzerland’s Achilles’ heels, as it coincides with peak demand, although only about eight percent of buildings are currently heated with electricity – a figure that is only set to rise moving forward. Then, there is also the country’s ambition to move away from nuclear power and electricity imports, which have – until now – met Switzerland’s winter electricity needs.

However, Alpine solar plants alone will not be a panacea for Switzerland’s electricity woes. For one, there is a lack of suitable terrain, particularly since the country is now acutely aware of nature conservation – not least due to tourism. Bird reserves, moorlands and other biotopes are red flags when it comes to large-scale PV systems. Plans to expand hydro storage power stations are, for the same reason, not without controversy. The preferred option here would be to raise existing dams – another area the new legislation is set to address.

Run-of-river power plants like the one in Wildegg-Brugg meet 35 per cent of Switzerland's electricity needs but generate three-quarters of their electricity between May and October. 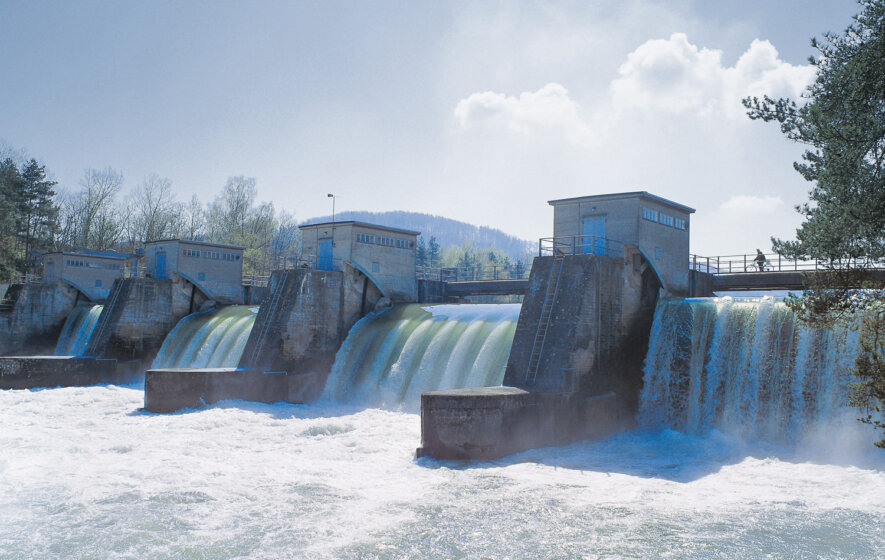 Run-of-river power plants like the one in Wildegg-Brugg meet 35 per cent of Switzerland's electricity needs but generate three-quarters of their electricity between May and October.