Biodiesel from rapeseed, ethanol from corn or sugar – both have become fairly customary alternatives to fossil fuels. So far, they have mostly been used to supplement conventional ones. Carbon-neutral fuel can also be synthesized from water and carbon dioxide. To do so, the required energy must be obtained through sustainable methods. So far, this has nearly exclusively translated into green electricity. Now, however, a third path shortened to ‘Sun-to-Liquid’ is set to make a breakthrough.

Sun-to-Liquid technology entails using solar power to run the energy-intensive step before fuel synthesis directly. This eliminates the intermediate step of electricity generation. For years, the process has been spurred by well networked research and development teams, with ETH Zurich, the German Aerospace Centre at the Julich Research Centre, and the biggest test facility to date in Móstoles near Madrid leading the way.

Sun-to-Liquid: How fuel can be obtained from the warmth of the sun Read more

These institutions summarised the conclusions of their work in a paper in the middle of the year: “We have outlined the entire path of production on a pre-industrial scale, from carbon dioxide, water and sunlight to liquid fuels, including kerosene,” author Stefan Zoller from ETH Zurich told the en:former.

Now Swiss-based Synhelion, a spin-off from one of ETH Zurich’s former projects, seeks to usher in industrial production: “On 6 September, we turned the sod at Julich for the world’s first industry-scale Sun-to Liquid plant,” company spokesperson Carmen Murer told the en:former. “We will build a non-commercial demonstration facility with which we intend to show that synthetic fuels can be mass-produced directly from solar energy.” 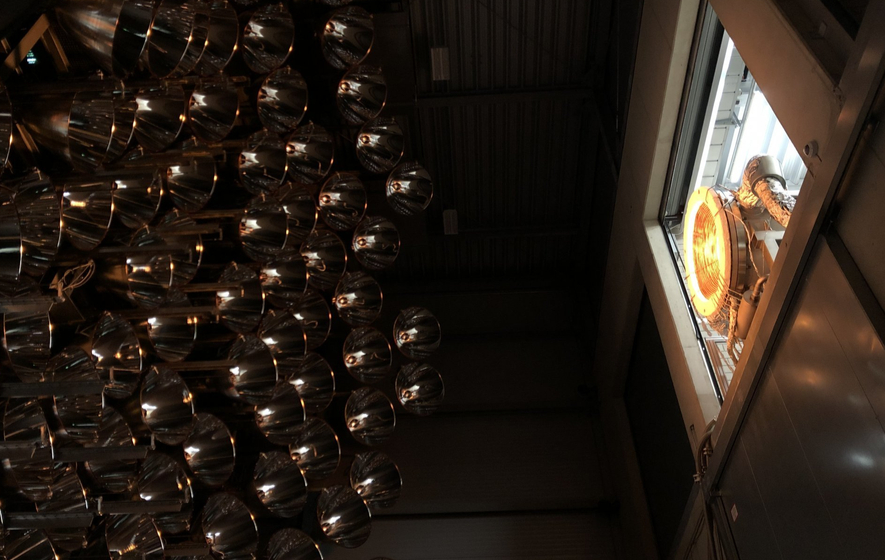 Normally, commercial facilities are built in more sunny areas, with a view to maximising capacity utilisation. Murer claims that, despite this, the Rhineland city of Julich is the perfect location for the demonstration plant: “Our German branch is situated there because a lot of our development and testing with our partners took place in the Julich Research Centre.”

At first glance, the plant looks like a CSP (concentrated solar power) station, with a field of reflectors directing bundled sunlight to a point atop a tower. This is where, in solar tower power stations, a carrier medium is heated to drive a steam turbine that generates electricity. In solar tower fuel plants, instead, a reactor is powered to produce aviation fuel in two steps. 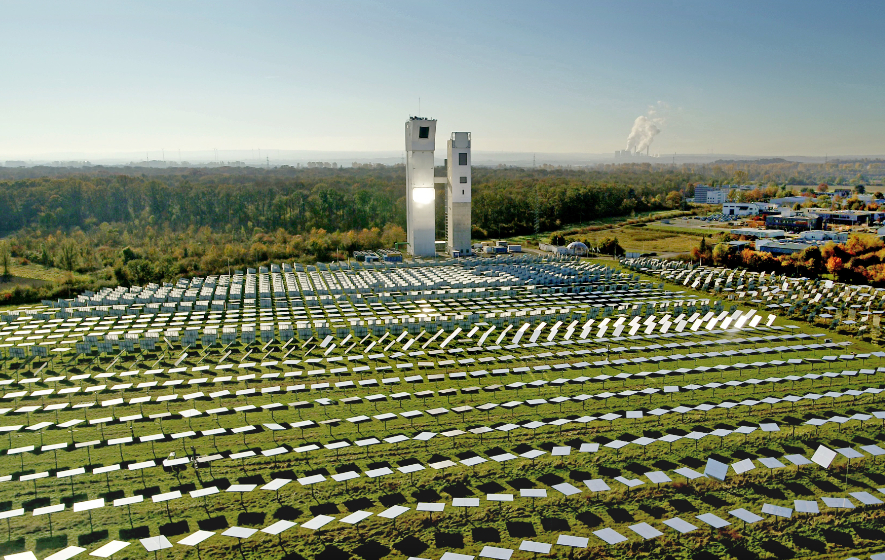 The first step involves obtaining a synthesis gas made of hydrogen and carbon monoxide from water and carbon dioxide. In a second step, the syngas is subjected to the proven Fischer Tropsch method to obtain green kerosene. Besides sunlight, only a small amount of energy is needed to pump the substances through the plants.

The new Synhelion facility includes some technical optimisations. To quote company spokesperson Murer, the main innovation is that “the reactor is heated via a heat transfer medium instead of by direct sunlight. We use a blend of carbon dioxide and water vapour to heat the syngas reactor to a maximum of 1,500 degrees.”

She adds that this pushes the door to mass production of synthetic fuels from sunlight wide open: “Fischer Tropsch and methanol synthesis are scalable techniques that were perfected

decades ago. Now we can also produce the precursor product, i.e. syngas, at an industrial scale using solar energy.”

Specifically, Synhelion claims that a 250-kilowatt receiver now enables production of 100 cubic metres of syngas per hour, enough for 150,000 litres of solar fuel every year. “Our intermediate product is a synthetic crude oil, which can be refined to a variety of fuels.”

SAF is a short-term alternative to fossil kerosene

The kerosene of choice is aircraft-grade fuel. After all, demand for green fuel is especially high in the aviation sector given that air travel is considered virtually impossible to electrify. The only alternative contemplated thus far is hydrogen, but it could only be used in newly engineered airplanes, which do not exist yet. Conversely, virtually unlimited amounts of SAF could be mixed into conventional aviation fuel in order to effectively reduce greenhouse gas emissions immediately.

Tank nozzle on the underside of an airfoil
© shutterstock, Jaromir Chalabala 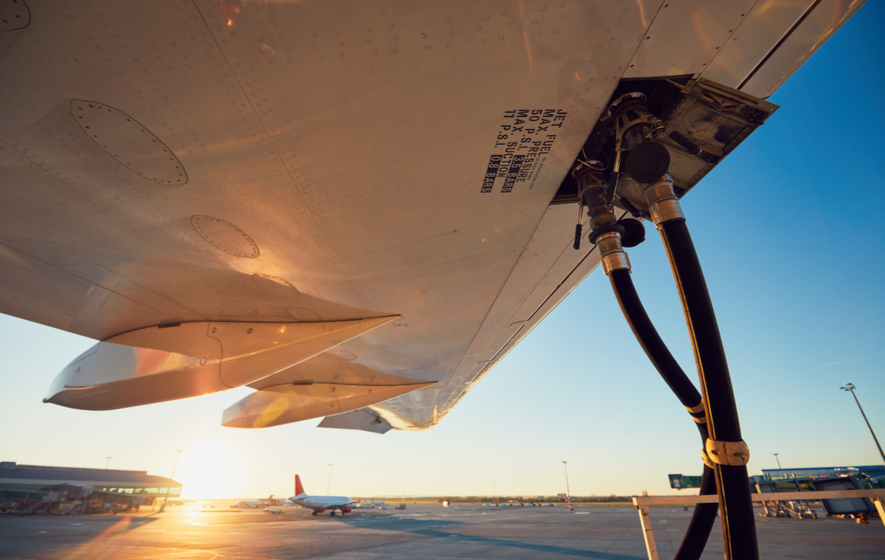 Tank nozzle on the underside of an airfoil
© shutterstock, Jaromir Chalabala

And this is precisely what the International Air Transport Association (IATA) intends to do: achieve a share of at least two percent emission-neutral kerosene from 2025 onwards. The goal for 2050 is to make all air travel carbon neutral, with 65 percent of aviation fuel being produced sustainably. Synhelion hopes that solar SAF will contribute 875 million litres per annum starting in 2030.

However, global demand for aviation-grade fuel already totals some 375 billion litres on an annual basis. Estimates have this figure rising up to over 600 billion by 2050. Murer believes that approximately 50,000 square kilometres of land would be needed to produce this quantity using Synhelion technology.

This would dwarf Germany’s second-largest state, Lower Saxony, and cover a surface area 100 times greater than the space occupied by photovoltaic systems the world over at the end of 2020. To put this into perspective, this would cover a mere 0.5 percent of the Sahara, 0.6 percent of Australia and 1.4 percent of the Arabian Peninsula – locations predestined for such plants.

ETH researcher Zoller anticipates the technology becoming even more efficient over time: “The current efficiency is still low. The theoretical efficiency is definitely higher than that of photovoltaics and electrolysis.” Zoller claims that solar kerosene possesses an obvious advantage over biofuel: “This technology can be deployed in non-agricultural areas, which means it won’t compete with food production.”