It’s 1766: British scientist Henry Cavendish is experimenting with various metals and salts in his laboratory. Almost by chance, he discovers something he terms “combustible air”. Back then, no one suspects that the gas will someday become one of the great hopes of energy supply: introducing hydrogen. Although Cavendish discovered it inadvertently, producing, transporting and using hydrogen today and tomorrow calls for highly sophisticated technical systems. In a mini-series, the en:former showcases various methods of producing, storing, transporting and utilising hydrogen while providing insight into the raw materials required to operate electrolysers and the like.

In the first instalment, we presented various ways to produce hydrogen along with the components necessary to build production assets. Part two is dedicated to the infrastructure required to transport the “combustible air”.

Hydrogen can basically be moved from A to B in myriad ways: in liquefied or extremely compressed form in tanks, e.g. by lorry for short hauls, or in gaseous state by ship if the gas originates in Australia, Chile or Namibia. The last option in this list is the most profitable choice for large volumes and transport within Europe. Unlike electrolysers, which have to be built from the ground up, the required infrastructure already exists – at least in fundamental terms. After all, long-distance hydrogen transport can generally make use of the pipelines carrying natural gas today. And this infrastructure will be freed up as its use steadily decreases in order to preserve our climate.

Experts are conducting the first series of pilot projects to explore the requirements that must be satisfied to repurpose existing pipelines from gas to hydrogen. This is because the two gases possess different properties. For instance, metallic materials behave differently depending on whether they come into contact with hydrogen or natural gas.

Despite this, the good news is that, on principle, hydrogen can flow through the steel pipes currently used to feed gas into the grid. This merely requires the pipelines to be inspected painstakingly, as explained by Daniel Bick, hydrogen technology expert at Open Grid Europe (OGE): “From a technical point of view, existing pipelines can transport hydrogen as well. Given that it has different properties than natural gas, the pipes are subjected to a fracture mechanics test before being repurposed. This involves identifying the consequences of hairline fractures.”

This is important looking to the future. Hydrogen may mostly flow through short stretches of transmission networks for now, but experts are already turning to much larger grids. In a trailblazing position paper entitled European Hydrogen Backbone, eleven European gas system operators have outlined a potential hydrogen network running through ten countries. They conclude that a significant share of the pipes likely needed is already in place. In 2040, about 75 percent of the hydrogen network, which will cover 23,000 kilometres by then, will consist of old natural gas pipelines.

However, one cannot dispense of new lines entirely. This means that the technical standards of new builds must be considered. After all, hydrogen is capable of accelerating corrosion initiated by cracks. This happens once hydrogen infiltrates the metal lattice, causing it to warp. These effects must be taken into account when planning networks, as this phenomenon dictates the service life of a pipeline.

“All new builds must – and will – be hydrogen-compatible” Read more

“We already solely use materials that are compatible with hydrogen,” says Bick. Therefore, the only thing left to do when pipelines are repurposed is determine how this changes their service life. And this is definitely worthwhile. Bick pegs conversion costs at a mere 20 percent of the expense of a new build. Moreover, just as the pipes, the valves and seals of natural gas transmission systems are generally suitable for hydrogen as well.

Compressors etc. must be hydrogen-ready

However, the technology upstream and downstream of the pipeline must also be considered. For example, the fuel has to be compressed before transport: “At present, hydrogen is usually compressed where it is produced. This will change in the medium to long term. The bigger the network, the higher then need for more compressor stations,” says Bick. Legacy technology is useless in such cases, the OGE expert claims: “Since hydrogen has a lower density than natural gas, this requires stronger componentry. Compressors need seven to eight times more stages than they do in a natural gas network.”

The maximum cost of setting up the network according to the authors of the European Hydrogen Backbone is 64 billion euros. Some 60 percent of the outlay is earmarked for building and converting the pipelines, with the remaining 40 percent being dedicated to the construction of additional infrastructure.

In compressor stations like this one, natural gas is compressed before being transported. In the future, such stations will also be increasingly needed for hydrogen. 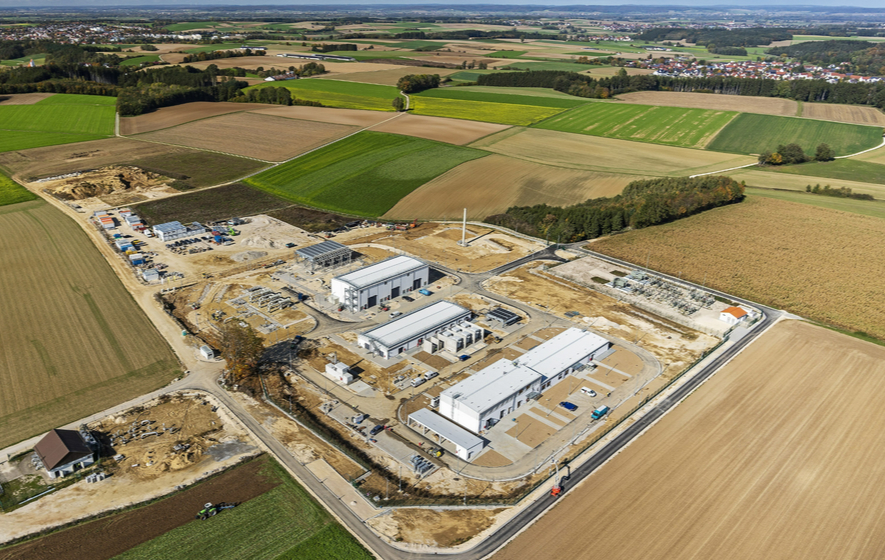 In compressor stations like this one, natural gas is compressed before being transported. In the future, such stations will also be increasingly needed for hydrogen.

Flares in use during pipeline operation

Technical differences will be even greater when it comes to operating the pipelines. “One important question in this connection is how to make large pipeline sections between two valve stations gas-free, for instance to conduct service, repair or maintenance work,” says Bick. Unlike natural gas, hydrogen cannot simply be expelled through blowers. Instead, it must be burned using a high-capacity flare system.

“This method has been tried and tested and is employed, for instance, in the chemical industry. It can thus be easily applied to the new situation,” Bick goes on to say. Mobile flares enable the use of the flanges used for blowers thus far. This is also important in terms of explosion protection. After all, like natural gas, hydrogen is a flammable substance. Therefore, pipeline operators must ensure that the materials used are tight and withstand pressure while also seeing to it that hydrogen can be expelled rapidly in cases of emergency.

Blending hydrogen into the natural gas network is a proposition that has been discussed especially for the first years of market ramp-up, when hydrogen volumes are still small. Instead of converting entire pipeline systems, the small quantities of the fuel would be mixed into the natural gas.

However, the OGE expert believes expansive transport networks have some major drawbacks. First off, carbon dioxide reductions with a small hydrogen share are miniscule. This is exacerbated by the high repurposing costs incurred, for example to modify gas turbines. This is because “a hydrogen share of just two percent requires conversion.” In addition industry, which will be a large customer, wants pure hydrogen and not a blend.

Unlike production, raw materials used for transport infrastructure thus do not play a decisive role in ramping up the hydrogen market. At best, long-life, robust pipelines and compressors will require different grades of steel. How this plays out when storing hydrogen will be demonstrated in the third instalment of this series.