Back in 1875, French author Jules Verne recognised the potential harboured by hydrogen. In his novel ‘The Mysterious Island’, he wrote “Tomorrow’s energy is water that has been broken down by electric current.” Today, hydrogen is considered one of the great hopes of the energy transition. However, producing and using it as an energy source and chemical commodity requires sophisticated technical systems. In a mini-series, the en:former will showcase various production, storage, transport and use techniques as well as shed some light on the raw materials needed to operate electrolysers and the like.

Production is where everything starts. As hydrogen does not occur in isolation, it must be cleaved out of various compounds. Industry-scale methods primarily use fossil raw materials. This has to change for hydrogen to spur decarbonisation. One especially sustainable option is hydrogen by electrolysis. This involves water molecules being split into hydrogen and oxygen using electric current. If the electricity is generated from renewables, the process becomes carbon-neutral and the hydrogen obtained by it is classified as ‘green’.

Hydrogen electrolysis has come quite far, but has only seldom been used until now. Furthermore, the facilities required to implement the technique need raw materials, some of which are very rare. ‘In 2020, the share of green hydrogen produced by electrolysis in Germany stood at a mere seven percent. However, we believe that this technology possesses substantial potential growth,” says Robert Miehe. He is Head of Department at the Fraunhofer Institute for Manufacturing Engineering and Automation IPA where one of his tasks is identifying the requirements needed to expand electrolysis capacity.

Essentially, there are three main electrolysis techniques today. The most advanced is alkaline electrolysis (AEL). This entails dipping electrodes into a potassium hydroxide solution. AEL plants are in use the world over and are considered to have long service lives with low investment costs. Their efficiency rating is approximately 65 percent.

Polymer electrolyte membrane electrolysis (PEMEL) is not as mature as AEL. However, the facilities needed to perform it have a higher electricity density, enabling them to be more compact. In addition, PEMEL systems can also be used as fuel cells. As the reaction is carried out in an acidic medium, however, the materials have to be more robust.

If waste heat is available, high-temperature electrolysis (HTEL) becomes an option. Temperatures in excess of 800 degrees Celsius boost the chemical reaction. This allows efficiencies of up to 90 percent to be achieved.

Speed of expansion to rise rapidly

If the green hydrogen market ramp-up progresses at the pace forecast by the expert, it will have an effect on demand for electrolysers. The 2020 European Hydrogen Strategy envisages 40 gigawatts (GW) of electrolysis capacity being built throughout the EU by 2030. This compares to just 1 GW today. And the new strategy entitled ‘REPowerEU’ seeks to raise the targets even more.

Fraunhofer IPA scientists calculate in a study that Germany’s electrolysis capacity will have grown to 213 GW by 2050, spread among all three of the technologies known today. “Each of the techniques has its own specific advantages, which can be extremely beneficial depending on the application. This is why all methods are considered to have potential in their respective niches,” Miehe explains.

Electrodes, membranes and electrolytes are the critical components

Each method demands that different raw materials be used to construct the electrolysers. The Fraunhofer researchers have analysed where scaling may be risky, in terms of both production capacity and the availability of raw materials.

This makes the membrane and electrodes the most critical components in AEL. The membrane is usually manufactured from polysulphone, a plastic that is very robust and heat-resistant, but comes with a hefty price tag, and zirconium, an extremely anticorrosive metal. The method employed is known as ‘film casting’. The analysis reveals that demand may occasionally exceed production capacity, but the experts believe that overcapacities can easily be achieved. The same holds true for electrode production, which in AEL predominantly calls for nickel, steel and precious metals, none of which were scarce when the study was prepared. However, given that Russia is one of the major suppliers of these commodities, this could change as a result of the war in Ukraine.

Resources are already an issue regarding PEMEL plants. The membrane-electrode units and the bipolar plates used by this technique are made of titanium-based materials. Precious metals such as platinum and iridium are applied as catalysts. However, these resources are finite, and extracting them is both time-consuming and expensive. As PEMEL is still in its early stages, large-scale facilities for producing the components are yet to be built. This requires investments. Nevertheless, the researchers are confident that the requisite capacities can be established.

Anodes for electrolysis like these are made of precious metals. Here from copper. 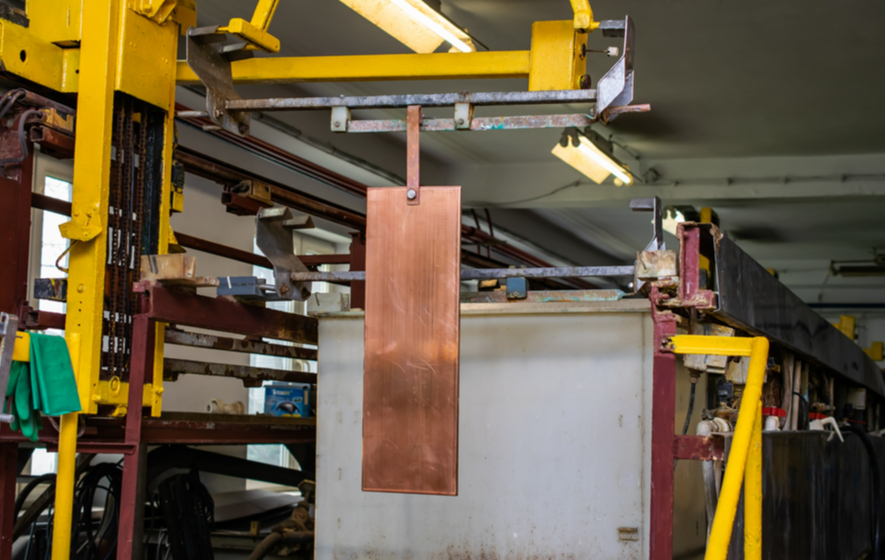 Anodes for electrolysis like these are made of precious metals. Here from copper.

To date, HTEL has only been implemented in small, isolated pilot plants, making this technology the farthest from being ready for mass production. However, most of the components it requires are similar in design to those of AEL and PEMEL systems. For instance, the interconnectors separating the cells from each other and connecting the electrodes could be manufactured using the process used to produce the bipolar plates. The solid-state electrolyte is coated with the rare-earth metal yttrium.

Robert Miehe teamed up with other scientists to take a closer look at the availability of critical raw materials. In an article published in the International Journal of Energy Research, they reach the conclusion that, with the exception of titanium, all materials are exposed to a supply risk, which they classify as ‘medium to high’ for platinum and ‘predominantly high’ for iridium, scandium and yttrium. PEMEL and HTEL capacity expansion could thus make commodities the limiting factor. A large portion of the reserves is located in China, which could make it difficult to diversify procurement sources on top of everything else.

The authors believe that recycling methods might be the solution to this challenge. Therefore, exploring these techniques and coming up with alternatives to the scarce resources is one of the most important focal points of research.

Miehe holds potential production under capacity to be less critical: “The lion’s share of the components considered can be manufactured by conventional production methods, which can quickly be scaled on demand. The likely bottleneck is final assembly, which at present is usually performed in manufacturing operations.” Automation concepts are thus among the aspects in the cross-hairs of current research projects. The en:former will showcase exciting potential solutions and concepts for making more sparing use of resources in the next instalments of the mini-series.