Achieving 2050 climate goals will mandate stepping up construction of solar and wind farms, batteries, and hydrogen electrolysers considerably. And this requires much greater volumes of metals and rare earth than are currently in circulation. Experts at Belgium’s KU Leuven have projected demand in Europe. On commission from the Eurometeaux metals association, they recently published the Metals for Clean Energy study.

These are the metals required by the energy transition

In a nutshell, by 2050 Europe might well have developed a need for a whopping thirty five times as much lithium and twenty-six times more rare earth than today. Instead of 23,000 tons of lithium, 861,000 tons would then be needed per year. This is where the authors find recycling can play a major role. 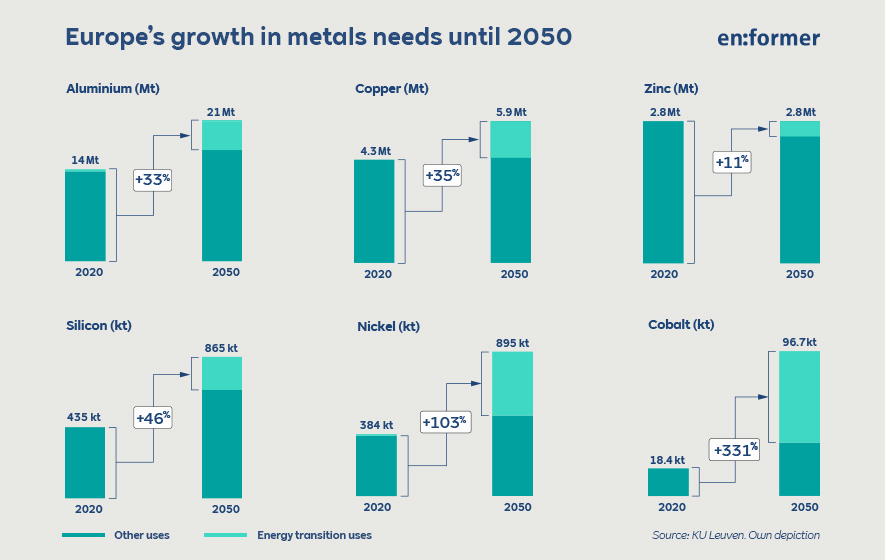 Demand for base metals such as aluminium and copper is also expected to skyrocket. They are used in myriad clean technologies including solar panel, wind turbine and EV manufacture. The study has the annual need for aluminium and copper increasing by 33 and 35 percent, respectively. The anticipated rise with regard to silicon, used above all in photovoltaic production, is 46 percent.

The authors also project demand to boom for metals used to manufacture batteries, e.g., for EVs and battery storage systems. These primarily include lithium, nickel, and cobalt. Forecasts for Europe envisage the need for lithium to grow 35 times over by 2050, with that for nickel roughly doubling and demand for cobalt rising up to three-fold.

These mounting requirements bring in their wake a huge challenge, as all of these resources are currently limited. Despite this, experts at KU Leuven wager a positive outlook given that by 2050, 40 and 55 percent of demand for base metals such as aluminium and copper and as much as 77 percent of the need for metals used to produce batteries could be met by recycling.

However, these metals can probably only be reused on a large scale in the distant future. They would have to be mined further until about 2040 in order to satisfy demand. This is when many of the current and future plants will reach the end of their service lives, after which they can be recycled. Salvaging could thus turn into one of Europe’s strongest pool of resources. Therefore, the experts recommend investing in appropriate programmes and technologies early on.