To date, three of the four units of the Mannheim large-scale power station generate electricity and heat from hard coal when run commercially. As everywhere else in Germany, this mode of operation will end in the foreseeable future. Once Mannheim starts sourcing electricity from wind and solar farms spread throughout Europe, the district heating network boasting 120,000 connections, which makes it one of the biggest in Germany, must be heated locally.

Mannheim-based MVV is taking a major step towards sustainable heat supply. The energy company aims to generate district heat entirely from carbon-neutral sources of energy. To this end, MVV is building a 20 megawatt (MW) river heat pump on the premises of the hard coal power plant on the banks of the Rhine. The lighthouse project could be trailblazing and provide important insights into sustainable heat supply.

The project is part of the large-scale heat pump lab that operates under real-world conditions, one of ten ‘real laboratories of the energy transition’ subsidised by the German Ministry for Economic Affairs and Climate Action to conduct research into sustainable energy solutions. A total of five facilities with thermal ratings between 1.2 and 23 MW will be set up and explored in Mannheim, Stuttgart, Berlin and Rosenheim.

Efficient heating at low outside temperatures

Small heat pumps used, e.g. in single-family homes, usually use ambient air or the Earth as a heat source. However, the big temperature range of up to 40 degrees Celsius in the summer to 25 degrees below zero in the winter is quite challenging. For instance, this requires that the refrigerant have a very low boiling point so as to ensure that it can absorb heat in the winter, thereby transforming into gaseous state.

Refrigerant is evaporated by a heat source and then compressed by an electric pump until it reaches a temperature of about 100 degrees Celsius. Thereafter, the hot gas is further liquefied by a condenser while it transfers a large portion of the energy via a heat exchanger to the heat carrier, which in heating systems is usually water. During this phase, the refrigerant cools down gradually. Especially efficient devices use some of the residual heat to preheat the water. To come full cycle, the refrigerant is depressurised via an expansion valve and cooled until its temperature returns below that of the heat source and can withdraw energy from it.

Components of a flow heat pump

Functionality of a flow heat pump 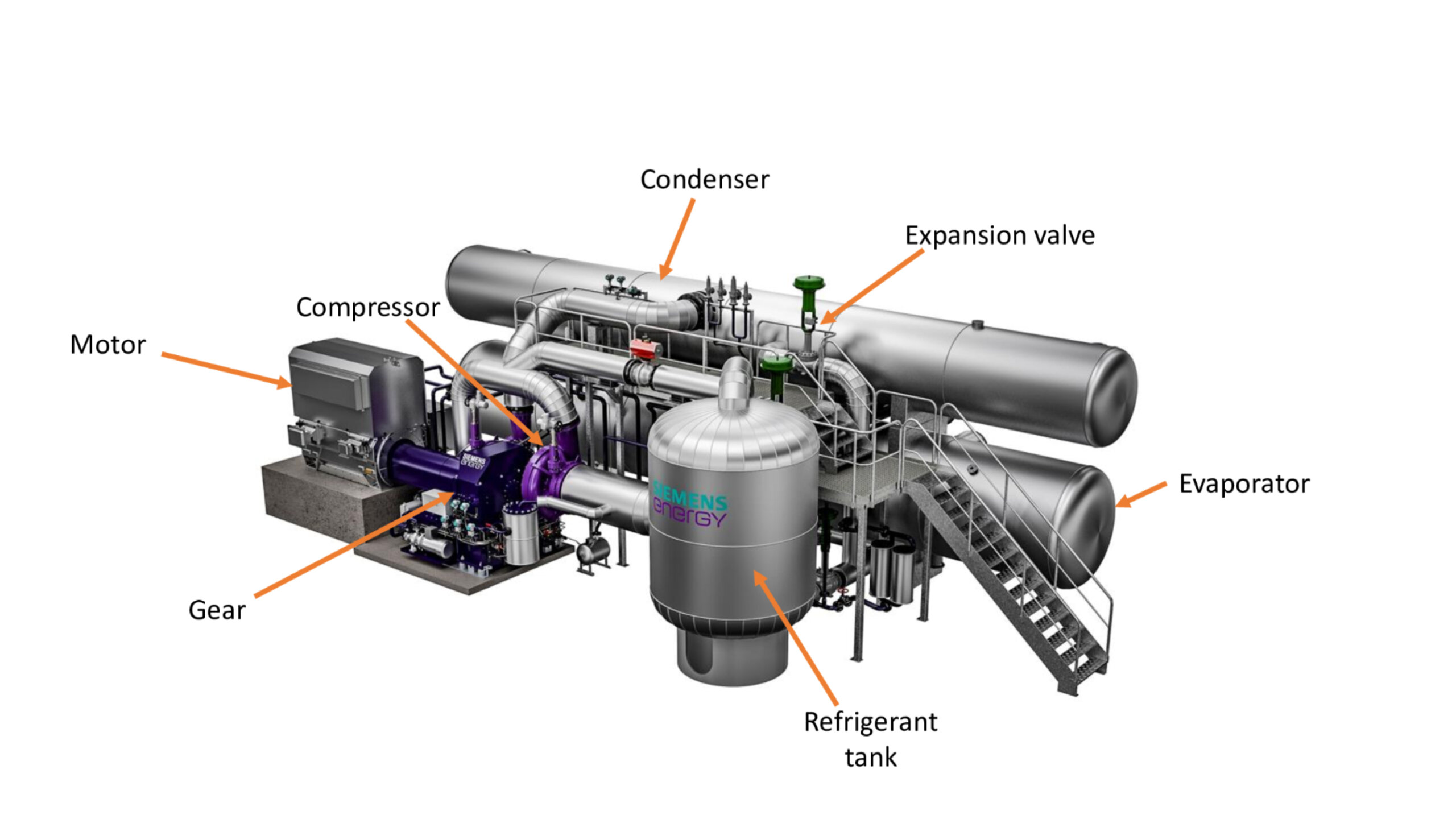 Components of a flow heat pump 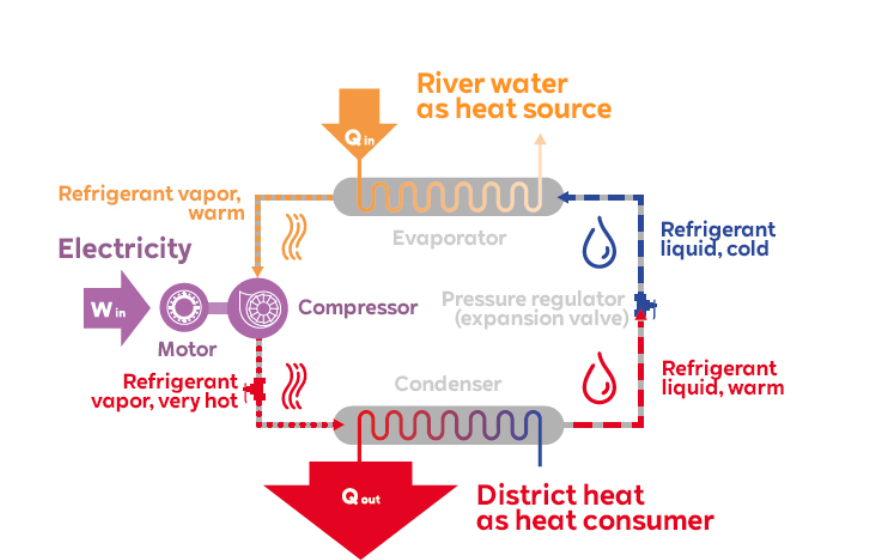 Functionality of a flow heat pump

During the cold months, the heat pump’s energy requirement rises not only in line with the increase in heating: “The lower the temperature of the heat source, the more energy it takes to achieve the target temperature,” explains  Georg Baumgärtner, Green Heat Project Manager at MVV Energie, who is responsible for the construction of the river heat pump.

This is why water is the heat source of choice for the heat pump that will be built in Mannheim. After all, bodies of water hold much more constant temperatures during the year than the air does. Georg Baumgärtner adds that at Mannheim, the Rhine only rarely drops to below five degrees Celsius – even in the deepest of winters: “This enables efficient heating even when outdoor temperatures are very low.”

Zero impact on environment and shipping

Conditions at the Mannheim large-scale power station are particularly favourable. First, the existing coal power plant already uses Rhine water in its cooling circuit. This explains why inlet structures that siphon off water from the Rhine are already in place. Second, the connection to the district heat network is also more a less a purely formal affair. Therefore, the station could take up operation as soon as the middle of the 2023.

Georg Baumgärtner says that as demand in the summer, e.g. for hot water, consistently exceeds output from the large-scale heat pump, the pump can be run at high capacity virtually all year round and replace conventional heat production. He further states that annual output would match the heat consumption of approximately 3,500 homes.

In addition, the plant can be expanded by further heat pumps, declares Georg Baumgärtner: “This way, we may well tap into almost 500 MW of theoretical thermal capacity potential while avoiding measurable consequences for the environment and shipping.” This would cover a significant share of demand for heat in Mannheim.