The rising share of generation accounted for by renewables repeatedly presents new challenges to grid stability. Sufficient storage capacity must be built to keep wind and solar power on tap.

However, conventional power stations do more than just produce electricity independent of the weather. They keep power contingents in reserve that can be fed into the grid on demand instantaneously. These buffers offset frequency fluctuations in the power grid, removing the need to rebalance the network through systemic intervention, in other words active regulation of production and consumption.

Large instant reserves are required whenever sudden, significant load changes, caused e.g. by the outage of an entire wind farm, must be offset in order to prevent a blackout.

Such instantaneous reserves are nearly exclusively located in the rotating mass of the turbine sections of conventional power plants. The reverse conclusion is that every decommissioned power station eliminates instantaneous backup power. Another associated problem relates to the ensuing reduction in short-circuit power (see info box) wherein the focus is, e.g., on the instant reserve. The en:former presents various solutions in a mini-series.

Replacing the mass of the turbo sections

What is probably the most obvious solution is to replace rotating mass with rotating mass, using rotary storage systems instead of turbines. These systems consist of one or several flywheels mounted on a shaft that is connected to what is known in expert circles as a ‘synchronous machine.’ These units act as a generator to convert rotational force into electrical power and as an electric motor to drive the flywheel during charging. When connected to a power grid, a synchronous machine does this in a perfectly natural manner: If network frequency exceeds the 50 Hertz target due to an electricity surplus in the grid, the machine goes into motor mode and withdraws energy from the grid, increasing the revolutions per minute of the flywheel. Conversely, as soon as frequency drops below the target, it switches to generator mode, releasing rotational energy from the store into the network, thus maintaining grid frequency. This process unfolds without the need for controls, simply implementing the physical law of inertia.

“This is a centuries-old, tried-and-tested technique,” says Stephan Werkmeister, Global Tender Manager at Siemens Energy. The company has already installed several large-scale flywheel storage systems from its factory in Mülheim an der Ruhr in Australia, Italy and the United Kingdom. Moreover, Siemens has just delivered the biggest flywheel in its corporate history to Ireland. The 177-tonne giant arrived at the Moneypoint coal-fired power station on the southwestern coast in early May. “The shipment includes the flywheel along with the vacuum housing, cooling units and so on, as well as the synchronous machine to provide a connection to the grid,” declares Norbert Henkel, Director Sales and Business Development at Siemens Energy.

120 tonnes for a few seconds of instantaneous buffer

The flywheel is scheduled to go online over the course of the summer. This is when the 120-tonne cylinder made of special steel that measures a mere four times two metres will be brought up to 3,000 revolutions per minute (rpm). Thanks to the synchronous machine’s gargantuan output, it will only take about 20 minutes to reach nominal speed. As the flywheel is encased in vacuum, small amounts of energy will suffice to maintain target rpm, Werkmeister explains: “This stores roughly 4,000 megawatt seconds in the rotating mass, which can be tapped into on demand.”

An exemplary use scenario: Should the ocean cable between Ireland and Great Britain fail under full load (a whopping 500 megawatts [MW]), the rotational energy of the flywheel alone would give the network operator an eight-second buffer – generally enough to compensate for the drop in output with further reserve power.

Four metres long, two metres in diameter and weighing in at 120 tonnes: The flywheel is made from extremely dense special steel to ensure extremely efficient rotation and withstand the enormous centrifugal forces. 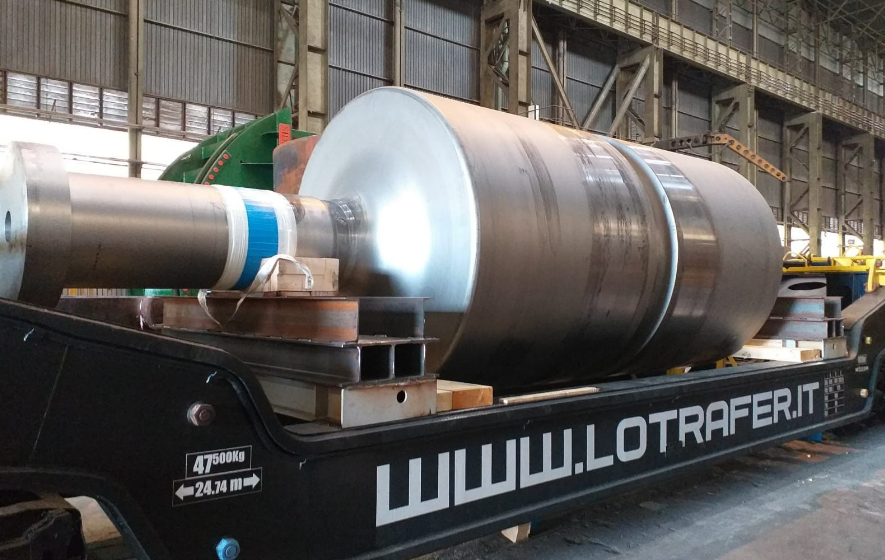 Four metres long, two metres in diameter and weighing in at 120 tonnes: The flywheel is made from extremely dense special steel to ensure extremely efficient rotation and withstand the enormous centrifugal forces.

Only if no additional energy were fed into the grid in this window would flywheel speed drop below the necessary minimum of 2,850 rpm. This would equate to a grid voltage of under 47.5 Hertz, resulting in a blackout. “This is currently but a purely theoretical scenario where our flywheel would have to provide the entire instantaneous buffer on its own because Ireland still has a number of coal and gas power plants up and running,” Henkel declares. “However,” he adds, “Ireland needs a substitute if these power stations are closed.”

This scenario is not in the all too distant future as Ireland has ambitious goals regarding its energy transition. The Moneypoint coal power plant is set to be closed in 2025. One objective is for renewable energy sources to account for 70 percent of total generation by 2030. In 2020, this quota stood at 42. “Once renewables have a share of 30 or 40 percent, one should take a close look to ensure ample instant reserves at all times,” Werkmeister claims. “After all,” he goes on, “the share accounted for by renewables is much higher on days with especially high yields.”

Henkel adds that this is more important on an island than on the interconnected grid on the European mainland: “Critical events in Germany can in part be cushioned by instantaneous reserves from France or Poland. This isn’t possible in Ireland.” The Irish power grid is connected to the network of another island: Great Britain. But this means that energy flows as direct current, which makes it very difficult to equalise voltage. Great Britain has the same problem with its connections to the European power grid. “Therefore, the two countries are investing heavily in instant reserves, which are implemented in flywheels,” says Werkmeister.

Australia also has the prerequisites for flywheel deployment. The share of aggregate domestic generation accounted for by renewables is some 25 percent, which is fairly small. During the sunny noon hours, however, photovoltaics often meet over 70 percent of demand in some parts of the country. And although Australia is considered a continent, its power grid serves a relatively small economy with a population of just 25 million. The expanses of land between catchment areas make it even more difficult to offset network fluctuations.]

Batteries as promising alternatives to flywheels

On principle, other energy stores can also provide an instantaneous reserve. This holds true in particular for the turbines of hydroelectric and pumped storage power stations. However, in most countries, there are simply not enough of them and their deployment periods are too short to be able to make a significant contribution to an instant reserve.

Wind farms also store rotational kinetic energy, albeit to a very small degree, primarily due to their low rpms. In addition, their generators are not equally suited to stabilising grid frequency, and they do not usually feed electricity directly into the grid, instead being connected via power electronics (inverters). Further information on this topic will be provided in Part 2 of our mini-series on instantaneous reserves.

Battery storage systems, most of which are based on lithium ion technology, can switch from charge to discharge mode lightning-fast, thus always fulfilling the desired purpose and, on top of their daily operation, using their inverters to potentially provide an instant reserve more affordably than a flywheel could. Such systems have been tested with partners by RWE Battery Solutions in the UK and are being used by ABB and other companies, e.g. in Australia.

However, in most markets, the route to a new ‘standard product’ is still a bit longer, as this solution must be defined extremely precisely and does not provide an instantaneous reserve as a physical parameter ‘just like that,’ instead creating it ‘synthetically’ by regulating the inverters. A current example is Stability Pathfinder 3 from National Grid in the UK.

Continued use of decommissioned generators

Until renewables with battery storage units have become established on the market as an instant reserve, there is thus but one real alternative to new rotary energy storage systems: preserving the existing instantaneous reserves. An example of this is RWE’s closed Westfalen power station in Hamm, Germany. This is where Siemens Energy is converting existing generators to a pure phase shifter. “The rotary parts of the generators alone have enough mass to make a significant contribution to the instantaneous reserve,” says Henkel.

Other projects also preserve turbine components with a view to increasing rotating mass. “The advantage is that legacy assets can continue to be used,” explains Henkel. “The disadvantage relative to a new flywheel is higher energy consumption because it is virtually impossible to package these turbo sections in a vacuum housing,” he adds. A combination of these two techniques would entail replacing the steam turbine with a flywheel and connecting the latter to an existing generator. Both solutions would be a boon to the electricity network in the very same way.

Canada is a land of contrasts, producing huge volumes of oil alongside one of the world’s greenest power systems
Read more
2022-08-08