The sun shines over 300 days a year, accompanied by refreshing winds blowing on the 3,054 islands and along more than 13,000 kilometres of coastland, providing excellent conditions for generating electricity from renewables. The government of this Mediterranean nation wants to tap into this huge potential and significantly spur the country’s energy transition this decade. To this end, parliament intends to accelerate the expansion of wind and solar power by introducing ambitious climate legislation. Greece aims to soon replace fossil fuel with hydrogen in industry on a grand scale. The European Union would like to support this undertaking with billions in subsidies, including corona reconstruction aid.

Greece’s energy system is undergoing a fundamental transformation as the country has been strongly dependent on fossil energy sources so far. In 2010, they accounted for over 80 percent of domestic power production, with more than half of the electricity coming from coal power plants, based on information from the Our World in Data platform. The expansion of renewable energy got off to a slow start, in part because the economic crisis occupied the south European country for many years. Its mountain of debt and associated savings measures left but little room for investment.

As the economic situation eased in recent years, the government focussed on the energy transition by using financial aid to initiate comprehensive structural change, including the country’s exit from coal-fired generation. Since 2014, coal’s share in power production has decreased steadily, amounting to a mere 15 percent in 2020 – a decline of more than two-thirds. The resulting slack is primarily taken up by gas, whose share in the electricity mix has risen from 13 percent in 2014 to just under 37 percent. However, renewable energy sources are gaining significance as well, with wind and solar combined climbing from 15 to 27 percent during the same period.

2020 power production in per cent

Source: Our World in Data

By contrast, the share of energy and electricity supply accounted for by oil has remained flat for years. This is due to structural reasons: owing to Greece’s limited reserves, the country was always strongly dependent on imports when it came to fossil fuel. According to IEA data, in 2010 only 34 percent of primary energy consumption, meaning usage of energy by all sectors including electricity supply, was covered by domestic generation. A whopping 96 percent of imported energy was attributable to coal, gas and oil sourced primarily from Russia, Iran and Saudi Arabia. Although the nation now procures much less coal from abroad, oil volumes have remained essentially unchanged. Greece aims to reduce this dependency by expanding renewables.

Less coal is also the declared goal for the country’s non-coastal regions. Original plans envisaged the last power station going offline in 2028. However, within the scope of the Greece 2.0 Post-Covid-19 Reconstruction Programme, Prime Minister Kyriakos Mitsotakis announced a new goal at the end of April 2021. Now the country aims to complete its coal phaseout by as early as 2025, with many power plants shutting down as soon as 2023.

However, efforts must be stepped up in order to hit the targets of the National Energy and Climate Plan (NECP). The objective is to reduce the entire energy sector’s greenhouse gas emissions to zero by 2050. This will require a rapid and massive expansion of renewables and explains why parliament made the country’s Climate Act even more ambitious at the beginning of 2021. Targeted usage of electricity from renewables has increased from 61 percent to 67 percent. The most recent quota falls just shy of the 30 percent mark, which is slightly lower than that of domestic power production. Energy imports are responsible for the discrepancy. What this objective means in concrete terms was illustrated by the Secretary General for Energy and Mineral Resources Alexandra Sdoukou in a speech she held at an energy convention in January: “Some 10.5 gigawatts (GW) of renewable energy are currently in operation. To achieve the NECP targets, we need to increase this figure to 19 GW by 2030. We have to add 8.5 GW in the next ten years, which translates into an average of 850 megawatts (MW) every year.”

Poland: Up to eleven gigawatts of offshore wind energy by 2040 Read more

A large portion of the new capacity is to be installed in wind turbines and solar PV systems. The government wants to take advantage of the favourable conditions and swiftly build numerous new wind farms – both along the coast as well as in the mountainous hinterland. Plans also include additional large-scale ground-mounted solar farms. By 2050, onshore wind capacity is to grow to 5.2 GW, with solar capacity increasing to 5.3 GW. While offshore wind hasn’t played a role in Greece thus far, these figures should rise to 7 GW and 7.7 GW by 2030. NECP estimates peg these numbers at 3.7 and 3.4 at the start of the year, with these energy sources accounting for 18 and 9 percent of total electricity generation.

Conversely, alternatives such as biomass and solar thermal energy still do not feature centrally in the government’s plans. However, the country can only leverage its full potential in the medium run if it makes use of innovative technologies as well: agri-PV solutions enable the dual use of land for agriculture and power production, floating solar modules can be installed on lakes, and wind turbines on buoyant foundations would be ideal along the steep coastlines of many Greek islands. Large battery systems are envisaged as interim storage for this energy. The government recently announced an invitation to tender for a 700 MW project.

Alexandra Sdoukou finds that these lofty goals can only be attained by 2030 by investing at least nine billion euros. The Greek government has already earmarked five billion euros to phase out coal, including infrastructure projects to assist affected regions in coping with the resulting changes. Support comes courtesy of the EU, with the European Commission pledging 11.4 billion euros from the Recovery and Resilience Fund for the expansion of renewable energy through to 2026.

In addition to financial incentives, policymakers are reducing red tape and modifying the procedure for approving the construction of new renewable energy assets. In the past, it has often taken years for all of the permits to be obtained, keeping many projects from getting off the ground. This is set to change as it will become much easier for operators to implement their ventures.

These favourable market conditions are attracting not just Greek power utilities, but also numerous foreign companies. For instance, state-owned utility Public Power Corporation (PPC) intends to transform itself from coal power plant operator to renewables player. One of its partners is Germany-based RWE Group: RWE Renewables signed a cooperation agreement with PPC at the beginning of the year. The companies seek to build PV systems with a total capacity of 2 GW.

To this end, they have now set up a joint venture in which RWE Renewables holds a 51 percent stake and PPC Renewables 49 percent. PPC Renewables will contribute nine solar projects up to a combined total of 940 megawatts (870 MWac), and which are located in northern Greece’s west Macedonia region, within the boundaries of the former Amyntaio open pit lignite mine. RWE Renewables has secured a Greek photovoltaic project pipeline of similar size for the purpose of including it in the Joint Venture. The photovoltaic projects are in various stages of development: The advanced projects are expected to start operating in 2023. Further early stage projects could follow in 2025.

Opencast lignite mining will soon end in western Macedonia. The huge mining areas will be converted to sites for renewable energy assets.

Thanks to its sunny weather, Greece has perfect conditions for generating electricity with solar farms. 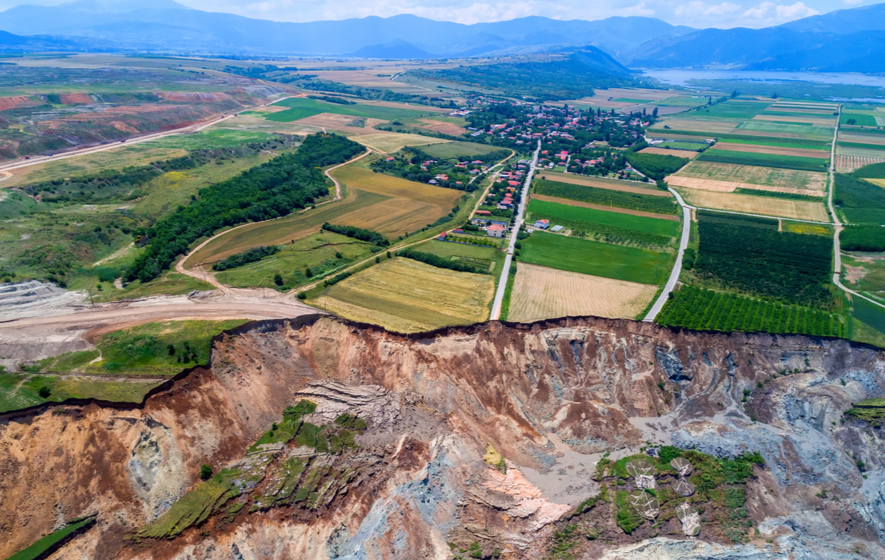 Opencast lignite mining will soon end in western Macedonia. The huge mining areas will be converted to sites for renewable energy assets. 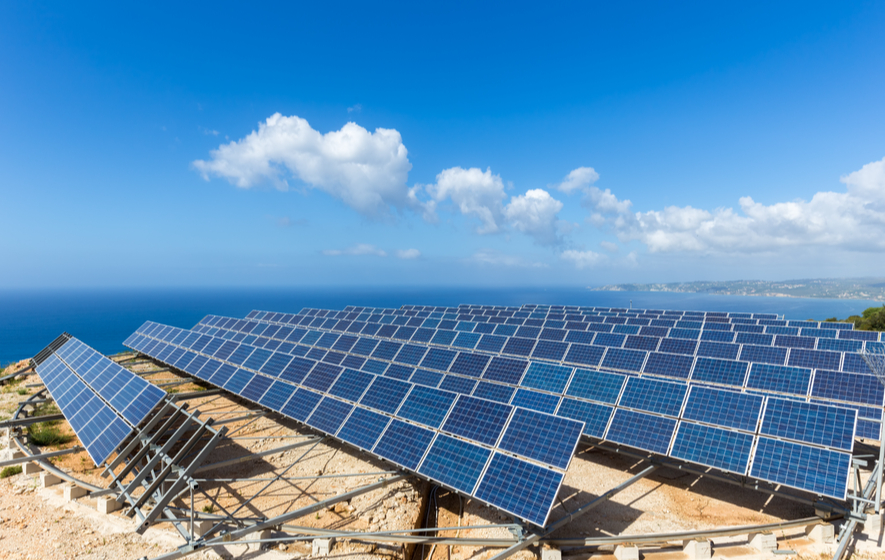 Thanks to its sunny weather, Greece has perfect conditions for generating electricity with solar farms.

However, in Greece structural change goes beyond building wind turbines and solar farms. With technologies such as green hydrogen, the country seeks to decarbonise other emission-intensive sectors besides electricity supply. What this fundamental transformation can look like becomes especially clear in western Macedonia. Home to 280,000 inhabitants, the region is among the structurally weaker areas. This is where the country’s largest lignite mining area is located. A fifth of economic output and some 10,000 jobs are still dependent on the sector.

But plans for the post-coal era are already in place. Soon, excavators will be replaced by solar modules and electrolysers. Named ‘White Dragon,’ the nation’s hydrogen plan entails establishing an end-to-end value-added and supply chain for green hydrogen, including sustainable solar electricity generation, sufficient hydrogen production and storage capacity, and transport infrastructure for direct-to-consumer supply. The planners want to produce up to 320,000 metric tons of the gas every year, creating 18,000 jobs for the region.

Western Macedonia is not the only region likely to benefit from the structural change. Experts anticipate the energy transition boosting the entire economy, paving the way for numerous new jobs in the country once plagued by crisis. Although the coronavirus pandemic dampened economic growth yet again in 2020, the European Commission projects a return to gross domestic product (GDP) growth in 2021, to the tune of 3.5 percent. And the renewable energy projects are a major reason for this sunny forecast.